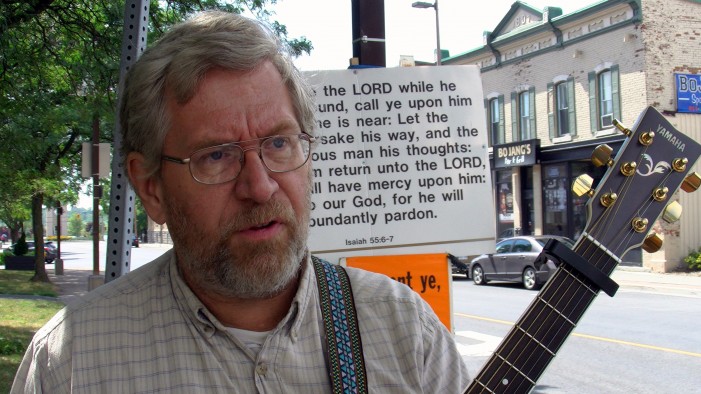 Cornwall ON –   Pastor Tom Newton draws a lot of attention here in Cornwall Ontario.  He’s called racist; homophobic, and worse on many websites in the area where is is rarely ever far from trying to spread his message.

He also attends public events as he did this Saturday at Buskerville 2.   As the event was quiet I had a moment to chat with him on his corner at Pitt and First.

I challenged Tom on some of his positions and some of the names tossed his way and he responded quickly.     I get asked by a few of our regular posters why he’s allowed to post on CFN and I share simply that Freedom of Speech means that sometimes we have to endure things we don’t agree with or even know are wrong just like others have to endure our positions.

I’m really curious why so many have such strong negative emotions to Pastor Tom as he’s known by many?  Is it his religion?  His tone?   His message?   Or some other reason.

You of course post your comments below.  I have a hunch you know will….