“I didn’t feel I could take a day out of the campaign.” NDP candidate Elaine MacDonald stuns Party Loyals by Refusing to take the Do the Math 5 Day Challenge VIDEO Agape Centre All Candidates Debate – September 15, 2011 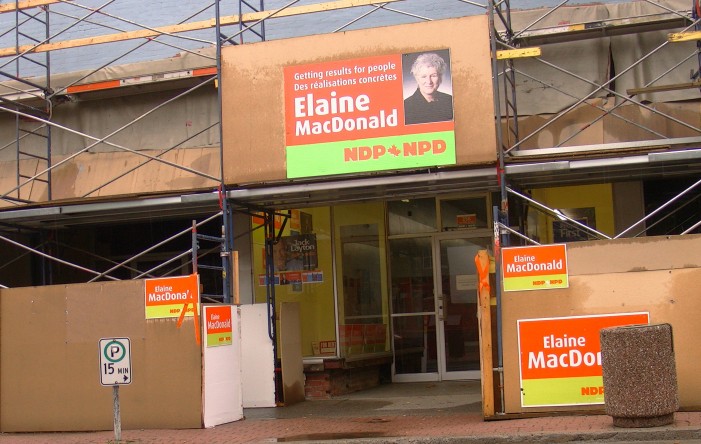 Cornwall ON – In a stunning turn of events  NDP candidate for SD&SG in the upcoming Provincial election truly illustrated how the Provincial wing of the NDP is not their Grand-Father’s NDP by being the only candidate to not be willing to take the DO the Math 5 day poverty challenge!

I didn’t feel I could take a day out of the campaign..

It shocked many of the again NDP crowd.   One young woman standing next to me shivering in the early evening debate shook her head.   It turned out she was one of Ms MacDonald’s campaign team as well as she shared her dismay at the City councilor’s answer.  Ms MacDonald was already rattled after twice defending her position as the deciding vote in allowing the Glengarry Apartments in Cornwall to go Condo in spite of their proximity to the hospital and the vital need they filled for seniors who had downsized and wanted central homes without having to purchase a home.

Mr. McFuddle, Mayor Jim McDonell, who now that he’s taken his leave of absence can focus on his attack phrases.  No racoon references tonight although he did keep searching out the crowd for Lisa MacLOUD or Steve Clark for help, but alas he was on his own and actually fared better than Ms MacDonald, but calling his opponent a liar really didn’t play well with the crowd.

Mark A MacDonald slapped Mr. McFuddle without using the “L word” as he phrased it.   Many of his critics have complained about the former city councilor’s rough edges, but the crowd seemed to respond to his answers which he didn’t fuddle and generally actually answered before communicating a point.   I asked Mr. MacDonald about his improvement as a candidate and he shared credit with his experience with former Cornwall mayor Brian Lynch.

The Libertarian candidate missed this debate as did the parachuted Green candidate who either was doing his homework still or watching Degrassi….a few in the crowd asked if the Green candidate would actually visit the riding once during the campaign which is causing ripples as they apparently refused the nom to a local Green party member who stated that she’d have been at all the debates.

We’ll be updating this story with more video as it becomes available.  So NDP viewers; has Ms MacDonald’s position changed your vote?  You can post your comments below.

“I didn’t feel I could take a day out of the campaign.” NDP candidate Elaine MacDonald stuns Party Loyals by Refusing to take the Do the Math 5 Day Challenge VIDEO Agape Centre All Candidates Debate – September 15, 2011 added by admin on September 15, 2011
View all posts by admin →

4 Responses to "“I didn’t feel I could take a day out of the campaign.” NDP candidate Elaine MacDonald stuns Party Loyals by Refusing to take the Do the Math 5 Day Challenge VIDEO Agape Centre All Candidates Debate – September 15, 2011"