Lunch Wars in the Cornwall Ontario Downtown Core – You pick the Best in our Poll! November 29, 2011 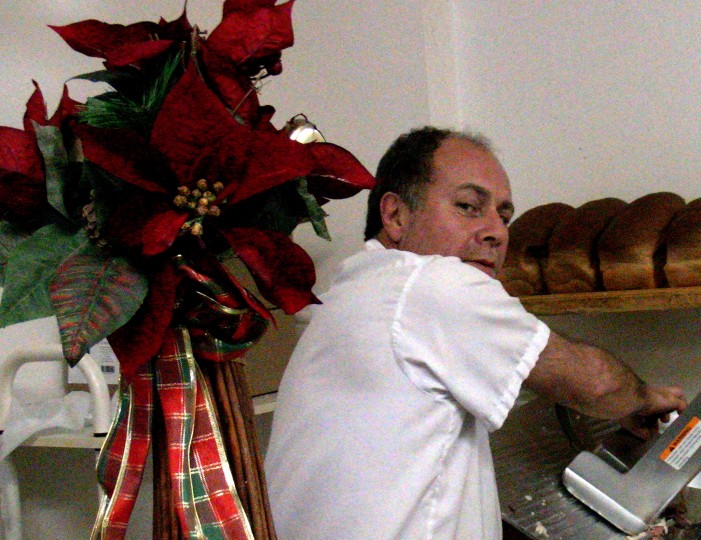 CFN  –   Cornwall Ontario’s downtown core is blessed with a lot of eating options for lunch.  I counted fifteen eateries on a walk between 3rd Street and the floundering Redcliff owned Cornwall Square.   The downtown core’s biggest activities at lunch centre around the  courthouse and a few other office buildings.

Keitha Fisher, the brain behind this year’s Farmers’ Market in George Assaly Lane is now entering the fray as she’s about to open DISH suggesting that she will be offering “real food” as well as locally roasted coffee although she doesn’t share who her roaster is as there is only one local coffee roaster to date.

So I thought I’d share a run down with some mini reviews from myself and from some other folks comments.

Rachel Batmann Ye old Fish and Chips has awesome fish/seafood, very good place.. Riley’s makes the best sandwiches ever and they aren’t expensive at all

Starting from 3rd Street the first place you hit is Riley’s Bakery.   Riley’s is a historic and magical snapshot back in time.  Rob and his wife Ana crank out some of the thickest and yummiest sandwiches in town.  It’s very traditional.    Hot homemade soups and of course cookies and deserts round up a fast and quick lunch to bring back to the office or when the weather is nice eat on a nearby bench.    They cater to larger events as well.   Rob also makes a very mean and amazing meat pie seasonally which is right now!   They’re at 248 Pitt Street.

Gemini Cafe I’ve only eaten at once.   I found them a bit pricey and the owner a bit surly.   Looking over the menu they seem more geared to night time fare than lunch.

Likewise Panda House is the only downtown resto that I’d give a negative review for.    When they’re  good they’re  good, but many times they aren’t.   For fun try asking to substitute an item in one of their combo plates or vary your order.   The woman running the show  seems to never have taken a marketing course.     They do offer a good value and their room is very funky and dated which I kinda like occasionally.  I suggest if you do order to go for some of the specialty dishes as you know they will be made fresh.   And yes, Panda was nailed a few times by local health officials for re-plating.

Cathy Campbell-Dowling I think “Pat’s Home Cookin’ Rocks…Kazoolies, on the other hand, EWWW..lol, you asked 🙂

Kazoolies is closest to the court house.   I’ve never dined there, but I’m not sure the above quote would be indicative.

Video of Sue Martin from the Grind.

Michelle Hanscom-Beauregard Nothing compares to The Grind. Lunch is good, coffee is great and desert… Ohhh that Pomegranate Cheesecake!

The Grind is a visual oasis.  I used to love taking meetings there.  Sue Martin is a refreshing host.   The art work is great.   They’re menu is a bit pricey for what they offer, but sometimes you have to pay for your premises.  It should be interesting to see how the core crowd respond to another Coffee House opening a few doors down and where the price points end up.   Their coffee could be better.    A menu upgrade probably would benefit.

Todd Toad Sauve Sometime’s I wish I still owned Pat’s,but on the other hand I’m enjoying retirement.Pat’s for breaky,Schnitzel’s for pizza and Keith’s Red,and gonna check out Dish very soon.

Schnitzels has a very deep menu.   My only issues have been the quality of the service and price.  At lunch time is of the essence.   They are the only Pizza option in the downtown core and the only wood oven in the area.

Truffles is the the place that many in the downtown core are waiting to return.    After fire gutted them the Mayor and CAO promised to help them return,but the doors still are not open although there’s hope of them returning soon.

Truffles did it right.  The menu price points were good and offered value.   The few issues that people had with them in their original incarnation were attributed to their small kitchen; something that will be remedied in the new location only a few doors down and right across from Schnitzels.   The biggest advantage they had was their beverage selection with the best wine selection in the downtown core.

Spinners Diner is a total treat.   A great retro room; great value, and probably some of the best service in town.   Barb & Gina Guest have been focusing on healthier and fresh alternatives as you can see from our video.

Jack Lee’s offers traditional Chinese buffet at lunch.  While the options are very limited the price point and speed of a buffet make them a good option if you want something different and time is of the essence.

Karen Kibbee Moustache Joe’s paninis are the best! AND they have an awesome dessert selection too :

Moustache Joe’s (109 Pitt Street) is probably the busiest eatery in Downtown Cornwall Ontario at lunch.  The blend of great service, speed, value, and ultimate quality of their home made options; amazing salads, panini sandwiches, home made soups, and the best Veal Parm in Cornwall make an awful lot of people very happy lunch time.   Their home made Macaroni and cheese has four cheese including Gorganzola and of course the freshly made home made sauces are something not to be taken for granted.      Joe was stirring up a plate of Shimp & Lobster linguini in white sauce in our video.    And of course they are the desert destination for anyone in the downtown core or city for that matter.

Fusion Grill has been around awhile.   They offer some interesting choices, but I’ve find that consistency can be an issue with them.  When they’re good they are pretty good.

So which eateries are your favorite for lunch?  You can vote in our poll and post your comments below.

7 Responses to "Lunch Wars in the Cornwall Ontario Downtown Core – You pick the Best in our Poll! November 29, 2011"