Don Cherry 3 – Brian Burke 0 And why aren’t there any players from Ontario playing for the Toronto Maple Leafs? 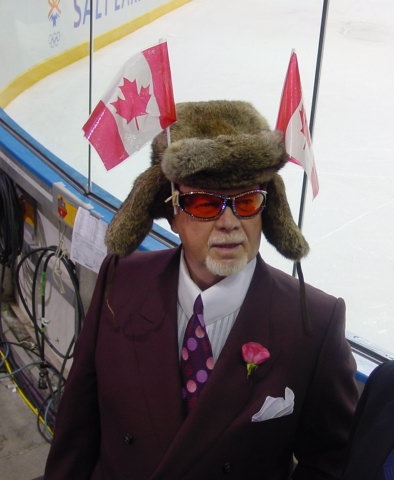 Maple Leafs, Brian Burke, heated up after a barrage by Grapes on Hockey Night in Canada.

The movie Goon, finishing first at the box office in Canada kinda shows where this nation’s hockey sense and feelings lie.

The Leafs have the most loyal fans in Hockeydom.  The Leaf nation stayed loyal during the dreadful Harold Ballard years, and now in the Burke era the results have been similar.

In Mr. Burke’s fourth season at the helm the team sniffed at the play off door only to skid out of contention.

The firing of Mr. Burke’s chosen coach, Ron Wilson, and hiring of his former coach in Anaheim, Randy Carlyle spurred on the right to the heart attack by Grapes, that the Leafs don’t have a single Ontario homey on the Major league roster in spite of so many NHL’ers being from the province.

Mr. Cherry pulled the Nationalism card; a powerful one when it comes to our Nation’s sport.   Hockey is one of the things that brings Canada together.   With the NHL being so American Centric it can touch nerves.    With the failure of several US franchises to gain the support and fervor apparent in Canadian markets is it a wonder why more people don’t voice out like Mr. Cherry?

Phoenix is still draining league coffers, and several other US franchises suffer while cities like Quebec wait for a team and Billionaires line up to put a second Toronto area team in place.

Why on earth would Mr. Burke ever try to get Don Cherry fired?  There are going to be a lot of guys choking back tears and pulling on a beer the day Don hangs up his suit and leaves Hockey Night in Canada.     We should be embracing and enjoying our institutions, and yes, Donald S Cherry is a Canadian institution instead of letting some American Hockey wannabee dictate to us how hockey should be run in its homeland.

Don Cherry 3 – Brian Burke 0 And why aren’t there any players from Ontario playing for the Toronto Maple Leafs? added by admin on March 5, 2012
View all posts by admin →

2 Responses to "Don Cherry 3 – Brian Burke 0 And why aren’t there any players from Ontario playing for the Toronto Maple Leafs?"