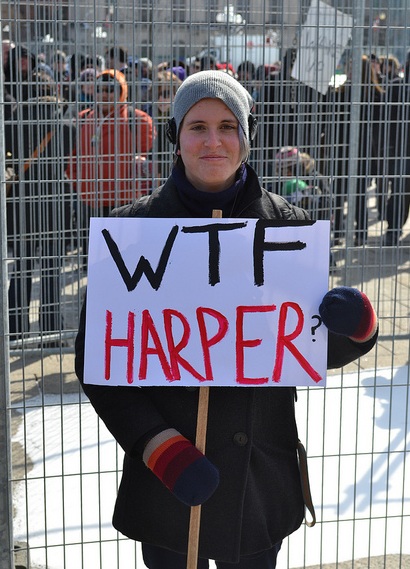 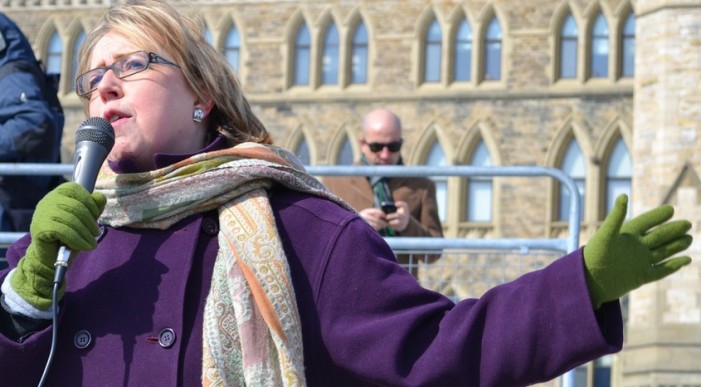 CFN – On a cold winter’s afternoon, as the temperature reached approximately twenty below freezing, I along with hundreds of other Canadians gathered at the steps of Parliament Hill to rally against electoral fraud. People were able to join both in person and online because it was also being streamed live for those at home who wanted to be there in solidarity with the rest of the protesters.

At the rally, participants and speakers demanded an independent public inquiry into the now infamous robocalls scandal as well as the nullification of the results in the seventy seven ridings affected. Following a nullification of the results, a by-election should be called in all seventy seven ridings in order to ensure fairness to the Canadian electorate. Notable speakers included rogue page Brigette DePape, Liberal MP Wayne Easter, Green Party leader Elizabeth May, as well as organizers Arun Smith and Shane Davis-Young from Canadians Against Electoral Fraud. Other notable people who made an appearance include NDP MPs Charlie Angus and Olivia Chow, NDP Leadership candidate Paul Dewar, former  provincial Green party candidate for Ottawa-West Nepean Alex Hill, and etc.

She sent us the following:

Despite the cold, we had a great turnout at the rally today. I expect to see more grassroots protests across the country, as Canadians from coast to coast raise the alarm on the misleading robo and live calls on election day.  In my speech, I emphasized how we cannot point fingers until we have a full public inquiry into what happened. Who planned these calls, who organized them, who paid for them? In the interests in transparency and democracy, the Prime Minister should be the one calling for answers to these questions.

Every Canadian should be outraged. Someone or some organization is responsible for a well-organized, well-orchestrated attempt to
interfere with democracy. That’s a crime. I am demanding our “tough on crime” PM show he is tough on electoral crime.

The scandal brings into question the legitimacy of Stephen Harper’s majority government, and while at this moment in time the investigation being conducted by Elections Canada is still pending, a dark cloud currently looms over the governing Tories. One thing is for certain, whoever orchestrated this national campaign to undermine the electorate has shown a complete lack of respect for Canadians’ fundamental right to vote in a free and fair election.

These American-style tactics of fraud and manipulation cannot and should not tolerated north of the border. Someone has poisoned our democracy, and the only antidote is to demand that our constitutional right to vote be upheld, defended, and forever put into practice.

The bastardization of our electoral system which took place during the last federal election is shameful and disgusting. Together we must make clear to all those who took part in the manipulation that we value our democracy here in Canada, and that we consider cheating the system offensive to the highest degree.

Point of Order by Stéphane Groulx – Rally against Harper Government electoral fraud on Parliament Hill – March 5, 2012 added by admin on March 5, 2012
View all posts by admin →

One Response to "Point of Order by Stéphane Groulx – Rally against Harper Government electoral fraud on Parliament Hill – March 5, 2012"