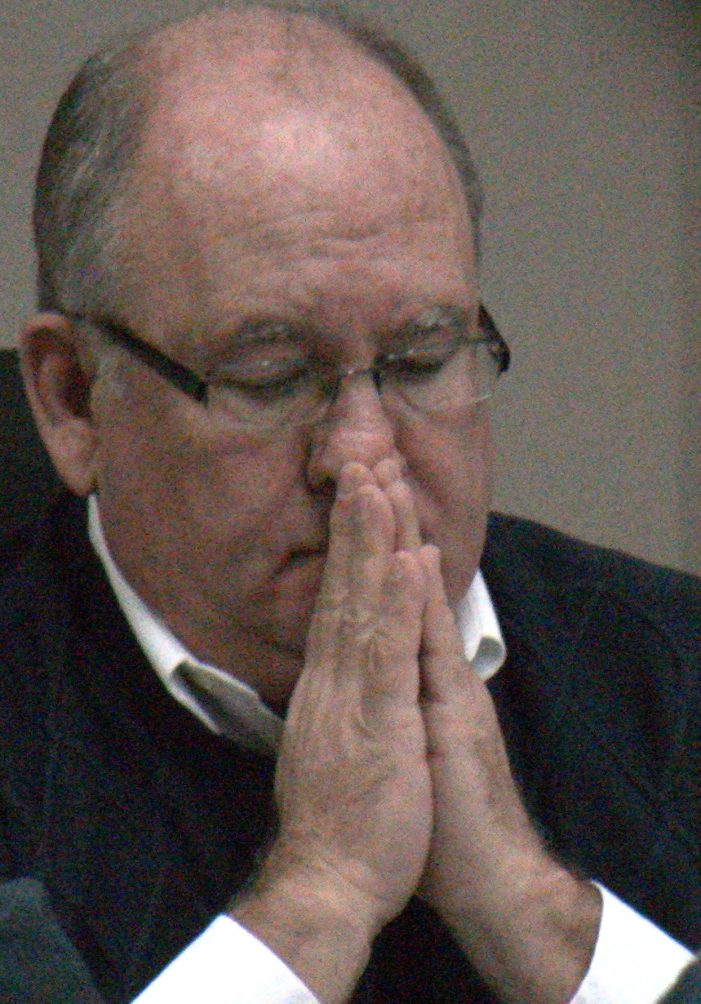 Cornwall has in camera meetings before each regular scheduled council meeting where it’s been said Mayor Kilger lays down what’s going to happen and things are rehearsed.   The bad theatre that follows usually about as entertaining as food poisoning cramps.

This meeting was not especially different.   This marvelous amazement at debate by Councilors like Bernadette Clement was utterly bizarre as that’s what City Council is supposed to do!  Take issues to the council chamber and debate them before making decisions that actually are good for the community as a whole.  Not what is usually done in our fair city.

After months of brewing it was time to vote on a 2% tax increase for the already over burdened tax victims of Cornwall Ontario.

Councilor Andre Rivette understood it clearly.  He stated that the increase should not come from taxpayers, but from City reserves because the money needed was because of city mismanagement; chiefly the Million plus dollars spent on litigation and settlements under CAO Paul “$1.4 Million Dollar Man” Fitzpatrick’s control.

There was a thick subtext to this meeting.   Councilor Rivette filed complaint against Mayor Kilger and council after getting blind sided over an interview he gave this NEWSPAPER on camera where he alleged that $1.4 million dollars had been spent on such actions. Makes a lot of sense, no?   Mayor Kilger and members of Council  have circled the wagons around the embattled CAO with the end result being that those on fixed incomes and can afford it least are being asked to pay for these indiscretions.

This scribbler has even learnt that the CAO still has not only returned the costs for using a city vehicle to pull him out of the snow across from former Glen Stor Dun Lodge Manager Donna Derouchie’s home across from the Kinsmen Soccer Field, but when he went on sick leave did not inform council directly; only sending out emails to city management and the mayor.  Several even said that they’d heard about it first here on CFN rather than city hall.

The shift from a 9-2 vote to 7-4 vote was evident in the tax vote as well.  Councilor Rivette put a motion on the floor that resulted in that exact vote with the Mayor even taking a cheap shot at this media outlet which has shot nearly 1,000 video clips that are available 24/7 on demand via our You Tube channel vs the local community cable outlet that broadcasts regularly scheduled meetings.

Listening to Elaine MacDonald go on about how 2% isn’t enough of an increase and how raising taxes are good makes made me wonder how disconnected and insulated she is with her Ontario Teacher’s pension from those of us struggling to make ends meet?

Queen Bernadette Clement, who seems to be biding her time as she awaits to take over for Mayor Kilger also supported higher taxes in this city with record high tax rates for Ontario.

Budget committee Chair Denis Carr spoke more in this meeting than he has all of this term showing extreme emotion as his budget was attacked… He did mention the Benson Centre again which itself was a back room deal.  Imagine putting a facility for children at the base of a toxic dump that requires kids to cross a major near highway like road and rail road tracks to walk to?   A facility that essentially put in its location to appease a few hotel owners over the NAV CAN “Is it a hotel” issue of a few years back.

Syd Gardiner decided to rant against Firefighters and EMS staff.  Nothing like a deranged rant to enliven a meeting.  Councilor Murphy who sided with Councilors Rivette, O’Shaughnessy, and Dupelle to not raise taxes spoke as well.

With over 300 members it was odd being the only member of the Community Action Group present?   Frankly there was more room to cut.  Cornwall’s budget committee was very lazy on this one.  They knew about the CAO’s cost to the city and not only as a group protected him, but did so on the backs of taxpayers.   Is Mayor Kilger and Council representing the city’s best interests?

So the 46,000+ residents of Cornwall Ontario officially wake up this morning to a bright and shiny new tax.    The irony is that the CAO himself is out on sick leave essentially ducking the whole mess while his Seven Dwarfs clean his mess and tidy his nest for a possible return….. 7 Responses to "Cornwall City Council Disconnect as Taxes Jump 1.51 % Or my weirdest Council meeting ever by Jamie Gilcig – March 29, 2012"