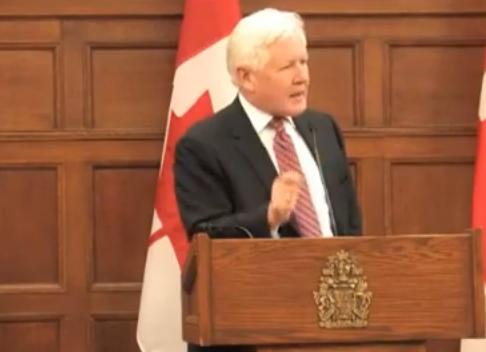 CFN – As we approach the month of June, the Liberal Party will soon be making a decision on when to hold their next leadership convention. Attached to that decision will be another key one as they must also decide if interim leader Bob Rae can run for the leadership position.

With roughly a month to go, there doesn’t seem to be much interest from the public in what they do or for that matter, what they decide. This isn’t unusual, as public attention is focused on Tom Mulcair and the NDP. Clearly at this point in time the NDP offers voters the biggest contrast with the governing Conservatives, the Liberals still don’t seem to fit in anywhere.

It is always tough for a third party to define itself and being in the mushy middle isn’t necessarily a good thing at this point in time. This is partially due to the fact that the voters haven’t turned on the Conservatives yet and the NDP is finally starting to get its act together. My guess is those opposing the Harper government will park their interest and their vote with the NDP for now.  Better to give a strong opposition leader a shot at dealing with Harper than switch back to the mushy Liberals with unknown leadership prospects waiting in the wings.

To date, even the potential candidates don’t have the profile to generate a lot of interest amongst the general public, even though inside the Queensway it will be a hot topic of conversation and speculation. But with BBQ season finally arriving, will ordinary Canadians being paying attention?

Martha Hall Findlay, Gerard Kennedy, Scot Brison, Marc Garneau, David McGuinty, Dominic LeBlanc, Denis Coderre and Justin Trudeau and of course Bob Rae are mentioned as potential leadership candidates, but how do Canadians see them? Do they see them as reasonably competent MPs or as a giant slayer who can defeat both Harper and Mulcair? Based on their track record I don’t see any of them in that position just yet.

Hanging over all of the potential candidates will be the question of how they will deal with a merger or coalition with the NDP. We can expect most if not all to deny any hint of a merger and they will probably dodge the question of a coalition arrangement with the NDP after the next election. But with their thirst for power, do we honestly think the Liberals, no matter who they are led by would walk away from a coalition deal that gave them a few seats around the cabinet table?

Gerard  Kennedy was honest enough to say recently that “I don’t think the coalition itself was particularly well handled in the end, but I think that was a matter of politics as opposed to whether or not it was the right thing to do. We’ll see how things are.”

You can bet the Conservatives won’t let him forget that one and it is a key question to put to every leadership candidate. Today, Canadian voters have been exposed to coalition governments more frequently than in the past, the UK being an example. Conservative scare tactics may not be as successful this time around and the bogeyman of a coalition government may have played itself out especially as the Bloc will have no role to play. It is therefore a legitimate question for potential Liberal leaders. Would they join an NDP led coalition or come to a working arrangement if it meant the defeat of the Conservatives?

At this point in time even that question is a long way away. For now the media and pundits will be looking at who might throw their hat into the ring? Can they raise the necessary funds? Which potential candidates will be seating MPs or defeated candidates?

Canadians will be asking themselves do I care and if I do is there a giant slayer amongst them?

Keith Beardsley’s View from the Hill – Is There a Harper Killer Among Them – Liberal Leadership Question added by admin on May 8, 2012
View all posts by admin →