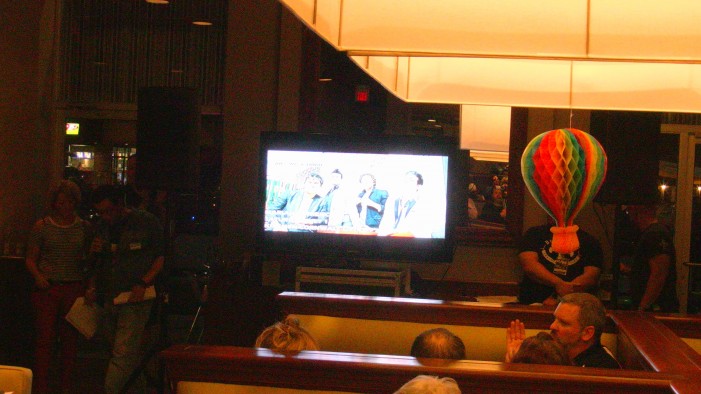 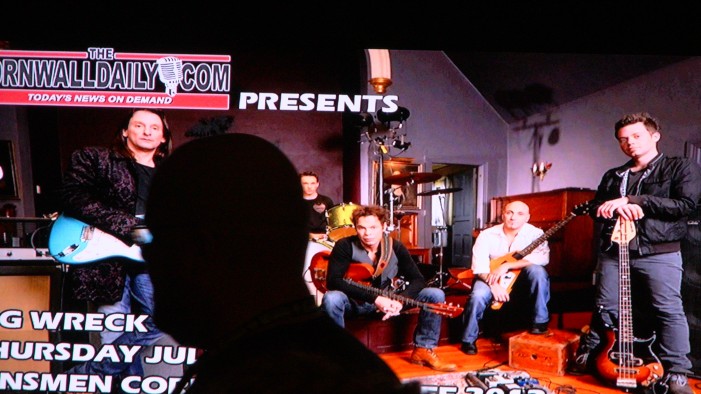 CFN – Imagine going to an event to release kick off upcoming celebrations with no signage for the event?   Anyone driving by the restaurant holding the Cornwall   Kinsmen 2012 Lift Off would think the local Corus radio station was holding a sales meeting.   The Corus Cars were prominently parked in the parking lot; their staff were there en masse, and even the intro videos to the band ended with single branding images. Not a single one of the band images like the one above has mention of any of the other sponsors of Lift Off.

Michael Galvin, Cornwall Kinsmen President and Media guy for Lift Off announced they were hoping for 30,000 in attendance for the event which would raise well over $500,000 for 2013 Lift Off.

The new board was introduced with many new faces during the festivities that drew about 100 people.

For an area that is focusing so much on Arts and Culture Lift Off could and should be an opportunity to really amp up the local music scene, but Rob Seguin, Music Director for Lift Off and Program Director for the Local Corus stations still has a handful of local bands opening with no local second stage.    We have been told that local bands are still only being given free tix for the event and not being paid which also if true doesn’t make any sense.

Again, the good news is that Lift Off has survived another year.     Hopefully saner minds prevail and that Lift Off somehow ends up being run by the city or new sponsors are brought in that aren’t so in the pocket and kow towing to one media outlet.

And the local acts are:

Glad to see some of the local bands getting some love, but geez Lift Off guys; throw these artists some coin.  It costs a ton to develop into the kind of artists that pull down what Rob Seguin gave to one management company for Lift Off!

Special thanks to Jamie Carr, talented morning man on CJSS who seems to have given this scribbler a special welcome to kick off Lift Off!

With Bluesfest in Ottawa, the Montreal Jazzfest and the myriad and multitude of artists on tour this summer it’s sad to see how this event is being handled.

Again; we can only hope for a good house cleaning and progress next year as the people of Cornwall deserve better.   Jacking up ticket prices while pumping dollars into the local Corus radio properties isn’t going to ring well in a community suffering from massive job losses and a suffering local business community.

Lift Off was a respite in the summer looked forward to by hundreds of families who now may only be able to listen in the distance instead of being able to afford bringing their families to Lamoureux Park on a hot summer weekend.

What do you think Cornwall?  You can post your comments below!

2012 Cornwall Kinsmen Lift Off Doubles Ticket Prices as Line Up Officially Announced added by admin on May 12, 2012
View all posts by admin →