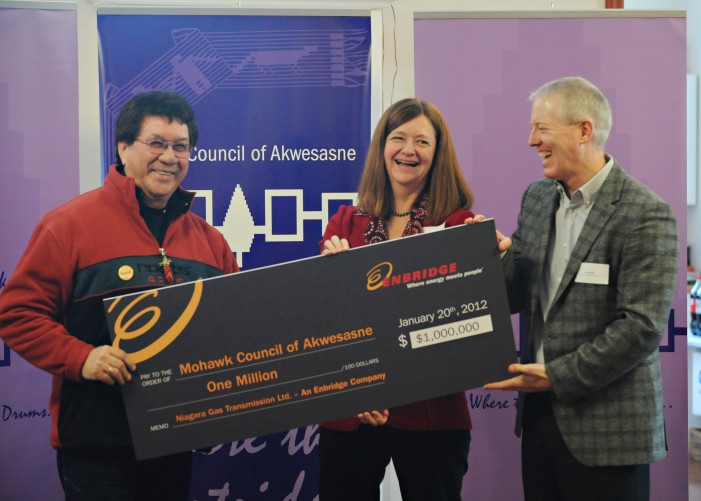 CFN – The Mohawk Council of Akwesasne issued the following statement today in response to the Seaway International Bridge Corporation’s (SIBC) decision to relocate the tollbooth plaza to the north end of the new low-level bridge that is being constructed for the Three Nations International Bridge Crossing:

The Mohawk Council is opposed to the Seaway International Bridge Corporation’s decision to relocate the tollbooth plaza to the City of Cornwall. The SIBC did not give any consideration to the difficulty that it will pose to the trade and commerce, as well as the recreational and community activities that Akwesasne and Cornwall currently enjoy.

According to MCA Grand Chief Mike Kanetakeron Mitchell, “We have already received complaints from the business community and have heard concerns that the location of the existing tollbooth has created challenges for the delivery of goods and services. The complaint is from Canadian-based vendors that have to pay a toll to access portions of Akwesasne that are also located in Canada. The toll has also been an inconvenience for spectators and has hurt attendance at games being held at the A’nowarako:wa Arena on Cornwall Island.”

The international border bisects Akwesasne and there is limited access to its northern districts of Kanatakon, Kawehnoke, and Tsi Snaihne. The only way for spectators to attend a sporting event at the A’nowarako:wa Arena or for vendors or customers to access the Peace Tree Mall on Kawehnoke is to utilize the international bridge crossing. They are still in Canada and shouldn’t be charged a toll.

Another point the MCA will raise with the SIBC is that they service two bridges that connect Cornwall Island. If a toll is required, it should be located on the U.S. side of the bridge or the south shore of Cornwall Island, which would make it easier for Cornwall and Akwesasne to enjoy direct business relations.

The Mohawk Council stated that the SIBC’s decision to keep the tollbooth in Cornwall doesn’t make good business sense and is shortsighted. It threatens the strong relationship that our community and Cornwall have established and pushes Akwesasne further away from Canada.

The Grand Chief added, “Not only is the Canadian Border Services Agency cutting off Akwesasne from Canada, we now have the SIBC doing the same.  It will force Akwesasne to focus on our relationship with our U.S. neighbors and do more business with U.S.-based service providers.”

The MCA will press the SIBC to reconsider its decision and remains committed to finding mutually beneficial solutions to Akwesasne’s concerns.

Mayor Bob Kilger of Cornwall had the following to say in a release:

“I believe that there should be no toll at all on the new bridge connecting Cornwall to Akwesasne,” said Mayor Bob Kilger. “It is a position that I believe is widely held in the local business community and around the Council table, and City Council will be considering a motion addressing this issue Monday night.”

MOHAWK COUNCIL OF AKWESASNE RESPONDS TO SEAWAY INTERNATIONAL BRIDGE CORPORATION’S DECISION TO RELOCATE TOLLBOOTH PLAZA added by admin on May 11, 2012
View all posts by admin →