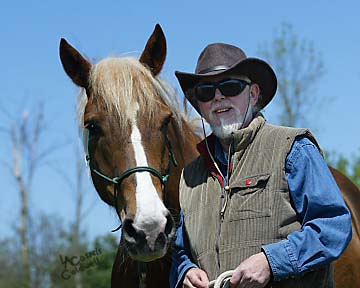 CFN – Spirits in Unity Second Column and introduction by Garry “Horsetalker” Meek
This Column of “Spirits in Unity” is being published by CFN for the community of Stormont Dundas & Glengarry. It is an honor to have you as a reader. I welcome any comments, questions or topics you would like me to discuss.  I hope you enjoy reading about the wonderful world of horses and the impact that natural horsemanship can have in making it a better world for both horses and humans.
.
In my first column I introduced you to my first really difficult horse, Laney.  I had already taken the first step by learning and practicing the six steps for success with horses that the Parelli program had taught me; namely Attitude, Knowledge, Techniques, Tools, Time, Imagination.  I thought I was on the right track but things just were not improving.  It became an event every time I brought Laney into the arena for a training session.  Everyone would leave the arena when I arrived with her, because they knew the action was about to begin.  They watched in amusement as this horse pulled me around the arena. I became the resident comedy act.  Even trying to catch her in the arena was a problem.  My frustration at my lack of success was becoming overwhelming. Things deteriorated so badly that she was literally at the door ready to be sold for slaughter, but I just couldn’t bring myself to do it.  What was I going to do to turn this difficult situation around? There was one further step I needed, support.
.
That support came in the form of one of Canada’s top horsewomen, a Parelli Professional, named Fawn Anderson. I invited Fawn to come here from British Columbia to put on a natural horsemanship clinic and at the same time work with Laney to see what she could do.  Within an hour she was already making positive changes in Laney’s behavior.  Fawn helped me apply one of the main stages in restarting a horse, Accept the Human.  Certainly Laney had not accepted me as her partner, provider and protector.  She didn’t care about who I was or my good intentions, only what I was doing.
.
One of the first things I was told to do was called ‘non-demanding time’.  Basically you simply sit with the horse without any interaction for about 30 minutes a day in a small enclosure.  In the beginning, sitting inside an enclosure was not an option as Laney would attack you so I started by sitting outside the pen at first, gradually coming closer and closer over time.  Eventually I mustered up enough courage to sit inside the pen, but I still sat close to the gate in case I needed a quick get-away.  Gradually Laney started coming a little closer.  This process, which normally takes only a short time with most horses, went on for several weeks.  The rule is that I had to be patient enough to allow her to gently touch me before I could touch her back.  After about 3 weeks of this daily routine, the day came when she came over and gently touched my shoulder.  I was overcome with emotion and lifted my hand to gently rub her soft muzzle.  That was the breakthrough moment for both of us.
.
There would be two more years of various techniques designed to help her to accept humans as partners. And slowly, our relationship continued to improve.
.
Today, those who knew her from her early days express amazement in the changes in her.  She has become a gentle, obedient horse who is now loved my everyone.  Kids love to ride her bare back and with saddle. They love to play with her.  She never offers to nip or be aggressive.  She is now the horse that she wanted to be.  I shall forever be grateful to Fawn for saving this horse for me.
.
Today you can see her photo in much of our “Spirit in Unity” material.  She is the most predominant horse in many of the images and is one of Lynn Cassels Caldwell’s favorite horses to photograph when she comes here.  Lynn has captured many special moments between Laney and I, and designed our partnership logo from a photo she took the first time Laney came running over to me in the field.  You can see her work, including some of Laney’s photos, at www.horsephotos.ca
.
Saving this horse was all about understanding the true nature of horses, about learning how they play, how they think, how they learn and why they behave the way they do.  In future columns I will try to give you some further insight into these wonderful animals.
Next week, “How Hurting Humans Help Hurting Horses”
Whether you are just a horse lover, have dreams of owning a horse someday, or already have one, I hope my columns will give you a special insight into the true nature of horses. I hope that you will find them both informative and inspirational.
May all your dreams come true,
Garry “Horsetalker” Meek
You can learn more about Horsetalker and “Spirits in Unity” at www.droghedamanor.com
You can contact Horsetalker at droghedamanor@gmail.com

Spirits in Unity Second Column and introduction by Garry “Horsetalker” Meek added by admin on June 18, 2012
View all posts by admin →