An UnFinished House – Fiction on The Cornwall Free News – July 6, 2012 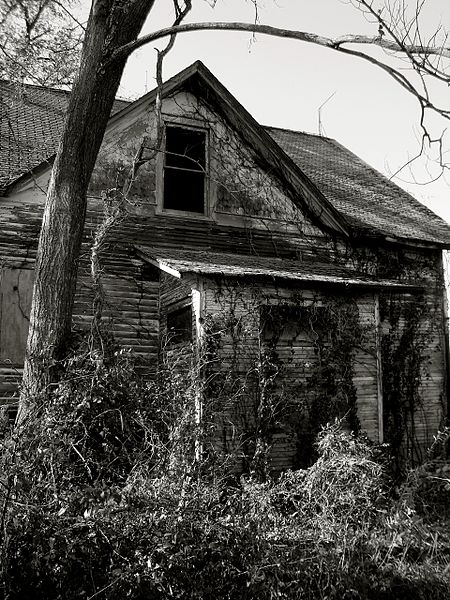 He always wanted his own home. Something that he made with his own hands. Nail by nail, each piece of board and brick fitting where it should. Where he wanted it to; something that would last forever, or at least as long as his forever.

At night, after his wife and son went to sleep he’d turn on the dim bulb and take out his stub of pencil and draw away designing his home.

Morning would come, lead shivers on his fingertips; his ashtray full and coffee mug with a chip, empty and dry.

His wife would come into the kitchen and look at him oddly. She never understood his dream. Their apartment was near her family and big enough for the one on the way. Why he wasted all this time drawing frustrated her and sometimes she’d let him know.

Work was hard. He worked with his hands and his back and took every shift he could. He secretly would put his pocket change away and if he was lucky his wife wouldn’t find it. Now that they had three children they needed every penny and his wife said they needed to get a car.

He was quiet at work which is why he never got the big promotion. He was reliable and minded his own business at the shop. Nobody was really his friend and nobody had a bad word to say about him. If they asked him for help or a favour he was always there.

As their fourth and final child was born his wife decided that they needed some extra house money. She started to take in some sewing and do some baking. It drove him nuts, but it kept her from pushing him harder. He loved his kids, but there were days that he never knew how they would find the money to keep paying the bills; especially as she spent more than her extra money could afford.

The car payments took the last pennies of extra money he had to save, but it gave him freedom. The family would go out into the country one Sunday per month and one Sunday when he was driving to go get some cigarettes while the family was eating lunch by the river he saw a sign. It was weathered and cracked.

He pulled the car over and got out. It felt good to walk through the tall grass and he found a Weeping Willow tree near a trickle of water. This was his spot. He felt it in his soul and he found a pencil in the glove box of the car and hurriedly wrote down the number on the sign.

For the next eight years he secretly drove out to his little patch of land. He’d borrow tools from work and salvage wood and nails from garbage heaps and scrap yards. There just was no money anymore. It was his only outlet as polio got a hold of his middle son.

Old pallets; construction sites; he hit a jackpot once when a farmer agreed to let him take his old barn down and those boards became his floor and porch. The walls went up slowly and he’d managed to get a roof on the place too. It was not going to be a big house; but it kept him going; year after year.

When his back went it became harder and harder at work. People felt bad for him and that was worse than the pain as he was a proud man. He started to miss a few Sunday’s to the house. His family still didn’t know what he did those few days when he was away.

The pain in his arm rippled up to his neck. The last thing he remembered was his little house before he woke up in the hospital. His family all stood around him and his wife had this look of fear on his face that he’d never seen before. His oldest boy had joined the army and was fighting the Nazi’s. His second son was working in a factory, and his youngest wanted to be John Wayne.

He looked in the mirror and finished putting on his uniform. He liked working as an overnight security guard. It meant he didn’t have to spend as much time at home. He and his wife had separate bedrooms now and the kids were gone; even the one with polio who worked in a Super market.

The funeral was sparse. It was on a Wednesday. Eight people stoically stood wondering who the man in the box really was. His wife stared out wondering how the bills would be paid. Nobody cried.

They only found out about the house when the tax bill arrived. His first born had come back from the war and took his dad’s old rickety car out to see what there was to see.

His heavy shoes left dust prints as he walked across the old barn board floor. There was barely any furniture. A chair found in the garbage; a small bed that looked like it’d never been slept in; a table, and an old wood cook stove. There was no running water; just a well and outhouse in back.

He walked down the spring and looked down at the trickle of water flowing by and wondered who his dad really was and why he kept this old shack that was little more than a storage hut.   He walked over to the Old Willow tree and he saw his dad’s name carved into the tree.   His fingers passed over the letters.      The rest of the family were just as confused. His wife was disappointed by how little this dream of his sold for.

She gave his few things away to the church. She’d bought a rocking chair as she’d always wanted one, and would sit by the window wondering where life went and where it was going as the sun went down.

One Response to "An UnFinished House – Fiction on The Cornwall Free News – July 6, 2012"