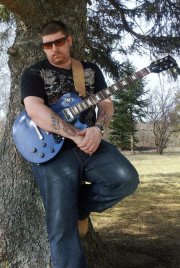 CFN – Bands and solo musicians that used to play local area bars and coffee shops to crowds of 20 or 30 people, are now opening up for national acts, in major films, primetime broadcast and cable television shows, and even commercials. Proving that indie music, a term used to describe independence from major commercial record labels or their subsidiaries with a “Do-It-Yourself” approach to recording and publishing, has landed squarely into the mainstream.

Hailing from Massena, NY, Singer-Songwriter Shawn D. Stoddard has been playing instruments since he was a young lad. “I used to tear apart my race tracks and use them as sticks and beat on cardboard boxes,” laughs Mr. Stoddard. “My parents finally got sick of it and gave me a set of Candy Apple Red Remo PTS drums when I was eight-years-old. This not only deterred me from tearing apart my race tracks, it also stopped me from beating on my parent’s pots and pans.”
.
Mr. Stoddard contributes his drumming style to the likes of Carter Beauford, Tim Alexander, and Mike Portnoy.

“In junior high I was a huge Dave Mathews, Primus, and Dream Theater fan,” Mr. Stoddard said. “So I studied their drumming techniques and adapted my own style from that.”

It was during these formative years that Mr. Stoddard started playing drums in various bands with local kids in the Massena,Norfolk,Norwood, and Raymondville areas. It was also during this time that he got his first electric guitar, a Tobacco Sunburst Harmony Stratocaster copy to be exact. “As a teenager I didn’t understand the intricacy of the guitar yet, but I did understand the drums”, said Mr. Stoddard. “When I was 16-years-old a good friend of mine, Tim Wilson, started teaching me how to play guitar. He was very influential in the starting of my career. When I turned 21-years-old, I switched gears from playing the drums and started playing the guitar in bands, as well as writing my own music. “
.
For the next eight years, Mr. Stoddard went on a rock-and-roll quest, as both a full-piece band and a solo act, entertaining fans in clubs, bars, coffee shops, and private parties throughout New Hampshire, Buffalo, Syracuse, Rochester, Maine, Vermont, and Niagara Falls.To improve his musicianship and showcase his original music, Mr. Stoddard entered several Battle of the Bands competitions, all of which proved to be beneficial to his career. “Somebody once told me to stick to one instrument that I am good and not go off that path,” recalls Mr. Stoddard. “But since I wanted to be a versatile musician, I decided to venture outside the box and learned how to play bass and keyboards, in addition to songwriting, singing, guitar, and drums.”
.
And boy did that pay off. In September of 2002, Mr. Stoddard won the Battle of the Bands competition that was held at SUNY Canton with his original song “Talk about it.” This win made it possible for his music to be featured on several area radio stations throughout St. Lawrence County and Canada. Over the next three years, this particular win also paved the way for Mr. Stoddard’s original music to take first place in two more Battle of the Band competitions held at the Turning Stone Casino, as well as three first place runner-up prizes at competitions held at The Turning Stone Casino, the Penny Acaridae in Rochester, and the Penny Arcade in Buffalo. “My mother and my three talented sisters encourage and inspire me to keep following my dreams,” Mr. Stoddard said. “I am very blessed to have such a loving and supportive family.”
.
The son of Nancy Stoddard and the oldest of four children, Mr. Stoddard comes from a very musical family. His sister Kristin (Stoddard) Petrie just recently won North Country Idol 5 and will be opening up for Randy Houser at the Lewis County Fair on July 20, 2012.His sister Lacey (Stoddard) Peets sings at the Smokehouse in Madridevery Friday night, as well as entertains for weddings and private parties.While his youngest sister, Talor Dubois, plays viola. “My sister Lacey sang with me on my song “Talk about it,” Mr. Stoddard said. “I am looking forward to the possibility of having both Lacey and Kristin sing with me on future recordings and maybe even have Taylorplay viola.”
.
So what are Shawn Stoddard’s plans now? Currently he is ranked #1 on the Alternative/Pop-Rock Charts at ReverbNation for Ogdensburg, NY and ranked #2 in the all genres category for New York and Canada with 2,066 fans and counting. He is also diligently working in the studio on his debut cross-over album featuring music ranging from country to hard rock and everything in between. “Once the album is completed, I plan to submit my songs to featured films and television shows,” Mr. Stoddard said. “There are a lot of talented musicians in the area and I am looking for a few in-studio musicians to accompany me on the album. So if anybody is interested, please contact my publicist, Nina Denny.”
.
For more information on Shawn Stoddard visit http://www.reverbnation.com/shawnstoddard.
.

Massena NY Musician Shawn D. Stoddard Looking to Have his Music Featured in Films and Television Shows added by admin on July 15, 2012
View all posts by admin →