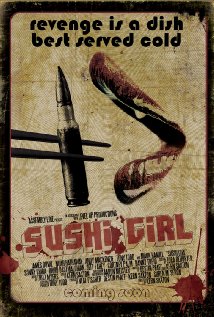 CFN –  Not too many first time directors sell out 700 seat halls for their debuts, but that’s exactly what Kern Saxton has done with his labour of love, Sushi Girl which makes its International Premiere at the 16th Annual Fantasia Film Festival in Montreal ! Sushi Girl is getting raves and is a bit of a cross between the Expendables & Reservoir Dogs.   Saxton is getting compares to Quentin Tarentino, but I see a bit more Roger Avary in Sushi Girl than Tarantino.

I had a chance to catch up with most of the gang at Fantasia!

Noah Hathaway and I talked about bridging from Child star to acting as an adult.  Sushi Girl was his first film after a long break from the film biz, and he’s getting rave reviews for his performance.

For the 700 people getting to see Sushi Girl tonight they’re in for a huge treat!   Luckily it will be available on a screen near you shortly!

Revenge is a dish best served Cold, but Sushi Girl will leave you hungering for seconds!

Check some of the 160 feature films and 300 shorts on their website.