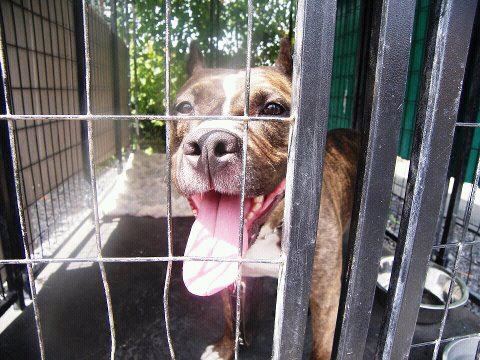 CFN –  Thousands are mourning the senseless murder of Wicca, a Staffordshire Bull Terrier became a victim of what happens when Bureaucrats go crazy.

The actual documentation of this case is what makes it most bizarre.  No hospital reports.  No bite marks.  No actual testimony of a bite.  No real process to deal with the incident.  Just the stroke of a pen leading to a death sentence.

If this had been my Dachshund that lunged it most likely would never have come to this poor animal being destroyed at the age of five.

There were options, but for some reason the City of Montreal refused to view them.   Wicca was reviewed by a group and deemed non-anti social.    The City simply refused to consider options in spite of petitions from all across North America.

Would this incident have happened if Wicca was muzzled when outside?   As a Rottie owner myself I’m hyper careful about who I expose my dog to, and what interaction I allow.

In the meanwhile poor Wicca is no more.   Her life snuffed out  because of breed prejudice, ignorance, and a city determined not to listen to the public and consider options.

Technically the by laws are written so that if someone invades your home for example and your dog protects you it could be put down for simply defending its owner.  Does that make sense?

There will be a protest at Place des Arts today in Montreal at 5 PM over the murder of Wicca.   In the meanwhile you can let Montreal know what you think if its behavior.

Please send an email to the Mayor of Montreal Monsieur Gérald Tremblay, telling him what you think of BSL.

Inundate the following e-mails with requests to pardon Wicca: