English being told to "Go West" to get jobs. 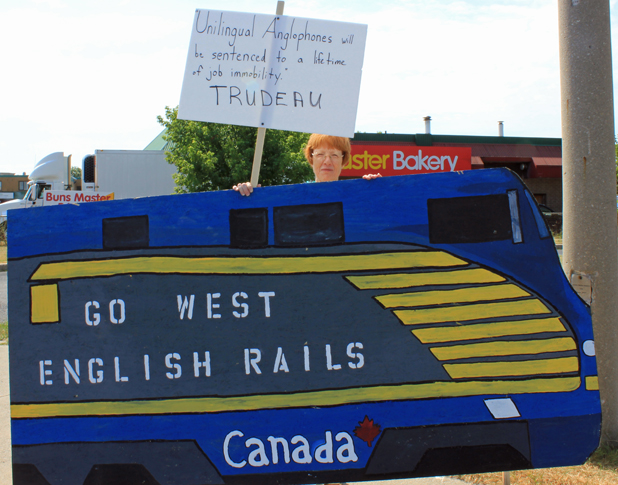 CFN – This morning some members of the Language Fairness for All group used a homemade train as their latest vehicle to promote awareness of what they see as increasingly discriminatory hiring policies at area places of employment. Amid cries that members of the Anglophone majority are being forced to: “take the train west” in order to get a decent job, the Sydney Street offices of the Eastern Ontario Health Unit was the latest site in a series of ongoing “Acts of Activism” organized by the group, which has supporters across Canada and even some in the United States.

Among the group’s growing number of allies is human rights activist Howard Galganov ( www.galganov.com ), who joined today’s Act of Activism. When Health Unit management told the group to get off of Health Unit (taxpayer) property, Galganov declined to comply. A single Cornwall Police officer was dispatched, and it appeared that the quiet demonstrator was about to be arrested. Later a police supervisor arrived. While our camera was rolling on the nearby City sidewalk, Galganov was interviewed by police, but not charged – at least not at this point in time.  Later when the camera isn’t around … time will tell.

One of the demonstrators borrowed my pen to write a cheque in support of the activist’s efforts. In our video clip she explains her motivation to do so.

In the video clip, LFA members and supporters make clear why they are devoting time and energy in lobbying for changes to policies, laws and the manner in which some language laws are being interpreted.  Cory Cameron now resides in the Timmins area.  Hearing him speak very well in English and French, one would never guess that this Cornwall born man has been told that he’s not bilingual (French) enough to work in Cornwall.

At noon, the close of the demonstration, Galganov and the others left the site as planned. Police did thank the LFA group for being respectful in making its public witness. Many drivers and passersby demonstrated a show of support for the member’s efforts.

Previous Acts of Activism have taken place at the Cornwall Community Hospital and the French health care clinic on Sydney Street. More Acts are planned for diverse sites in the coming months. The issue is much broader than simply being limited to the health care professionals.

LFA seeks to restore some balance in hiring practices which it sees as highly favouring the minority 4% of Francophone Canadians (outside of non-bilingual Quebec).  Even though Francophones (not Anglophones who’ve learned some French) are one minority among other minorities in the nation, 100% French/English bilingualism is being tauted as the new normal.

Members of LFA plan to participate in Galganov’s fundraising BBQ lunch this Saturday (August 11, 2012) at noon at Maple Ponds Equestrian Center in Williamstown where he and his wife Anne reside. All proceeds go to their battle for Freedom of Expression.