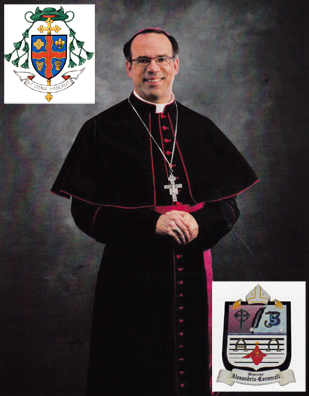 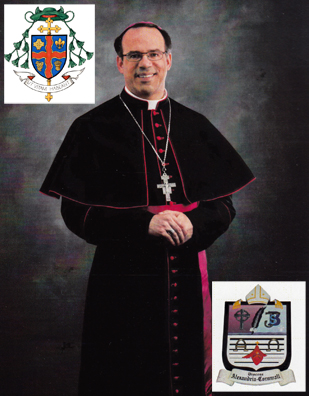 The Most Reverend Marcel Damphousse, D.D. Please click on the photo for an explanation of the Coat of Arms 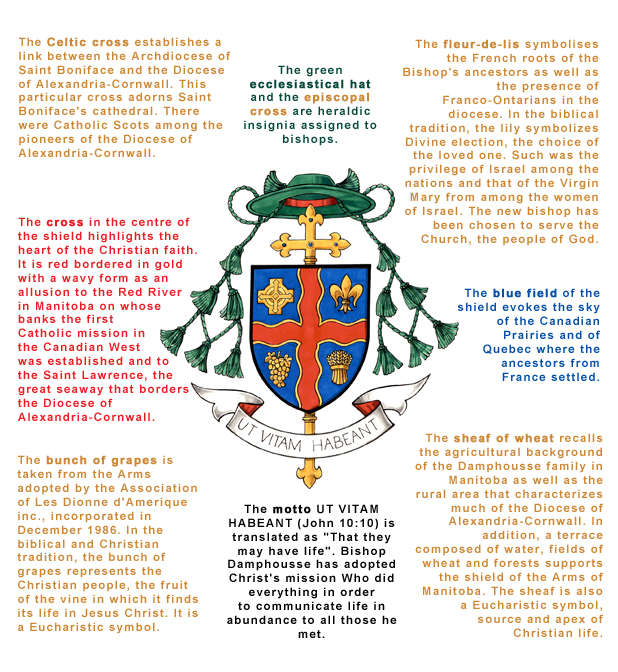 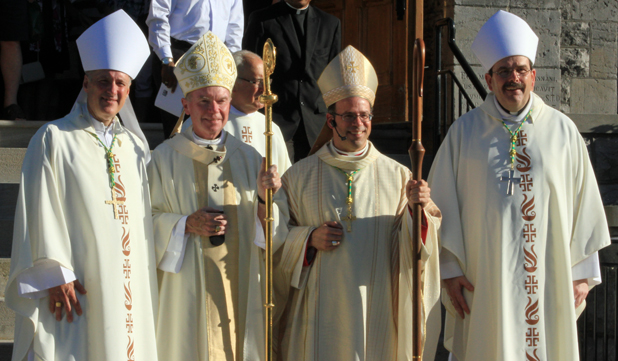 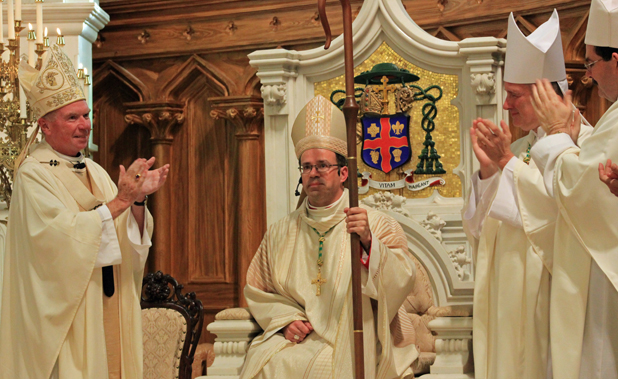 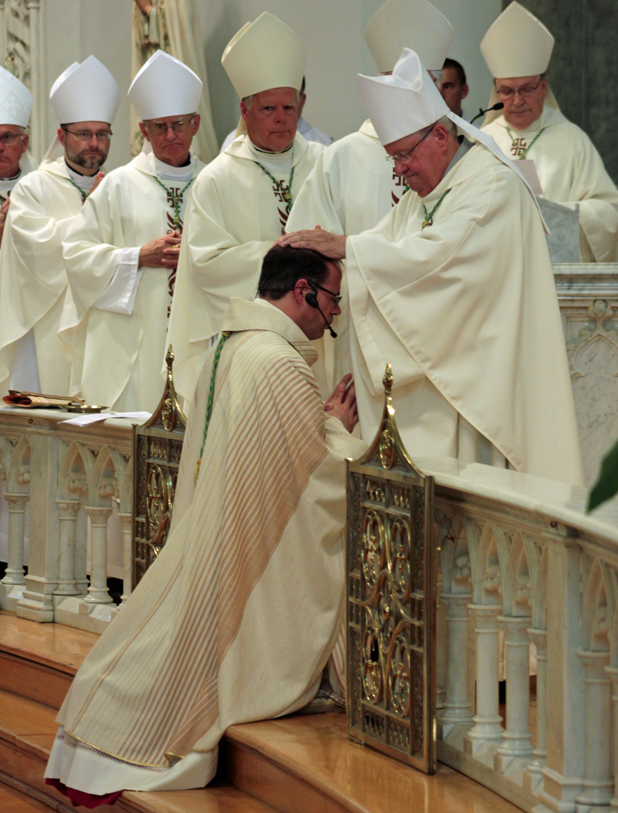 The laying on of hands by each co-ordaining bishop is a formal method of invoking the Holy Spirit. 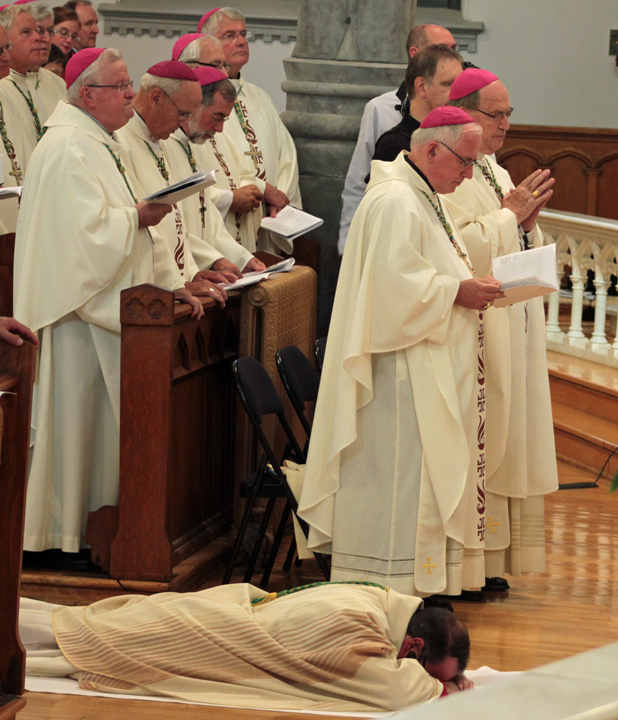 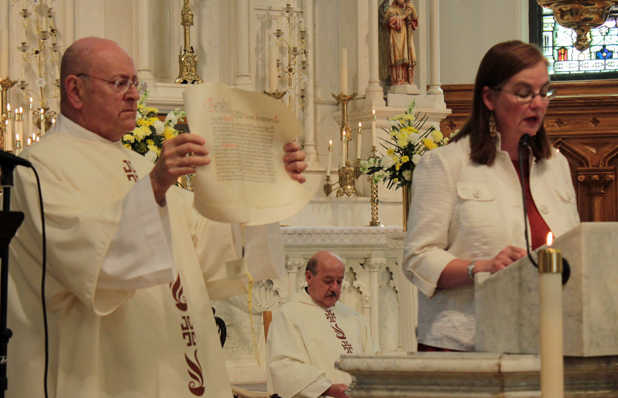 The mandate from the Holy See was presented to the College of Consultors and read by the Chancellor. The document authenticates Rev. Marcel's call to the sacred order of Bishop. 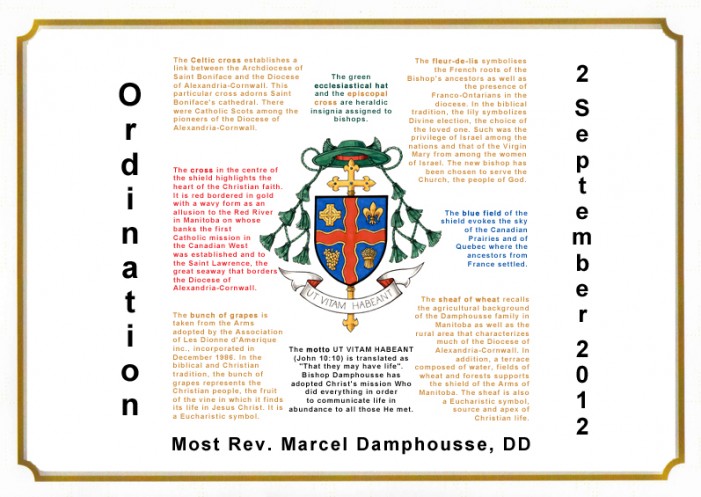 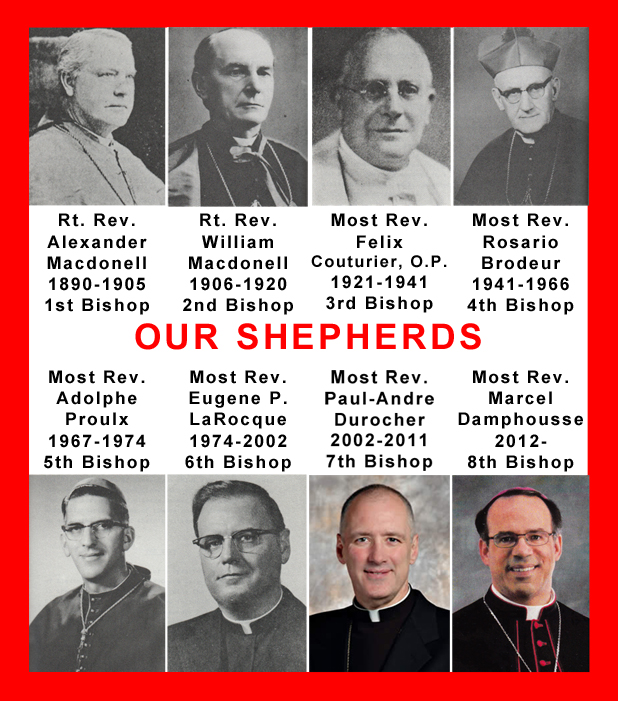 Habemus opiscopus – we have a bishop!
CFN– This afternoon at Alexandria’s magnificent St. Finnan’s Cathedral, in the presence of the Apostolic Nuncio to Canada, the Most Reverend Pedro López Quintana (Titular Archbishop of Acropolis), the Reverend Marcel Damphousse was ordained as Bishop of the diocese of Alexandria-Cornwall. Principal Ordaining Archbishop Brendan O’Brien (Kingston) was flanked by Main co-ordaining Archbishops Paul-Andre Durocher (Gatineau) and Albert LeGatt (St. Boniface). Among the 24 Co-ordaining bishops and archbishops, were Thomas Cardinal Collins (Archbishop of Toronto and Cardinal-Priest of San Patrizio) and Bishop Terry LaValley of the neighbouring U.S. diocese of Ogdensburg. About two dozen close friends and family members made the journey from the dioceses of St. Boniface, Winnipeg, Pembroke, Grouard-Mclennan and Sault Ste-Marie to witness the joyous occasion. The celebration was scheduled for the long weekend to enable family and friends to participate. A cross representation from the community included Anglican priests, Archdeacon Frank Kirby and Fr. Steven Silverthorne as well as M.P. Guy Lauzon, M.P.P. Jim McDonell and North Glengarry Mayor Chris McDonell. Due to the size of the gathering, participation of the public was only possible by obtaining a ticket from a limited quantity provided to each parish.

Damphousse’s June 28 appointment as Bishop of Alexandria-Cornwall coincided with his 21st anniversary of ordination to the priesthood. He is the eighth bishop of our diocese, and the first bishop to be ordained in our midst in just over 50 years. Although not originally from our diocese, some fifty years ago Reverend Jacques Landriault was ordained here as the first of a series of two Auxiliary Bishops and is now Bishop Emeritus of Timmins. Bishops Proulx and Durocher were already auxiliary bishops in another diocese when assigned here; Bishop LaRocque was ordained in his home diocese of London just before being installed here and orchestrating a name change for the diocese along with the establishment of a Co-cathedral in Cornwall.

Another diocesan “claim to fame”, so to speak, with regards to producing bishops, is Bishop Joseph Luc Andre Bouchard of Trois Rivieres diocese, who was ordained to the priesthood here in the diocese and served in that role for twenty five years before being called to the episcopate in St. Paul Alberta. Bouchard was in attendance today. The late Bishop William Joseph Smith, formerly a priest from our diocese, was ordained bishop for Pembroke diocese in St. Finnan’s in Alexandria on July 25, 1945. Smith hailed from Greenfield.

As part of the Ordination Rite, Damphousse was invested with a ring which is a symbol of the Bishop’s sacred office. It is a gift from His Grace Emilius Goulet, Archbishop Emeritus of St. Boniface.

Damphousse’s mitre, a liturgical vestment worn by bishops, was a gift from the Damphousse and Dionne families.

The pastoral staff (crosier), symbol of the governing office of Bishop, was a gift from the Archdiocese of St. Boniface.

Liturgical music for the majority French bilingual three and a quarter hour long celebration was provided courtesy of an ad hoc diocesan choir which was formed and directed by Miss Helen McAlear, comprising some 75 singers and musicians from every parish in the diocese.

During the new bishop’s closing address he commented:

From the very first day of my appointment, I have been blessed with an abundance of greetings, prayers, and words of encouragement from bishops throughout Canada. I feel assured that I am not alone in this new calling. … One when arrives in a new school or a new workplace he or she is quick to assess and evaluate what kind of people live there. First impressions are key to opening doors and establishing a relationship of trust. I must say that I am well pleased with what I have seen so far.”

It’s proving to be a busy week for Canadian bishops. This past Wednesday saw Reverend Valéry Vienneau installed as the sixth Archbishop of Moncton, New Brunswick. Tomorrow Reverend Gregory Bittman will be ordained as the first Auxiliary Bishop in the Archdiocese of Edmonton. That event will be video streamed live on the diocesan website, which also contains a downloadable liturgy program.

Historical Summary of the Diocese
During the 1870’s, Catholic Scotsmen with their priests settled in the area that became the parishes of St. Andrew and St. Raphael.

The Reverend Alexander Macdonell was born in Scotland and educated for the priesthood. MacDonell obtained land in Glengarry County and, in 1804, brought many soldiers from his disbanded Highland Regiment to join the Loyalists already in Upper Canada. In 1805 he was appointed the third pastor of St. Raphael. In 1807 he became Vicar General and was put in charge of all pastoral activities in Upper Canada. Macdonell helped raise a second regiment which he accompanied into action during the War of 1812. With residence in St. Raphael and with the same responsibilities, he became Auxiliary Bishop in 1819. He became the first Bishop in Upper Canada, having been assigned to Kingston diocese in 1826, but he left St. Raphael for Kingston only in 1829.

The Diocese of Alexandria was established on January 23, 1890. Split off from the Kingston diocese, it comprised the counties of Stormont and Glengarry and is part of the Ecclesiastical province of Kingston. On September 16, 1976, permission was granted from the Sacred Congregation for Bishops to change the name of the diocese to Alexandria-Cornwall and to establish a Co-cathedral in Cornwall.