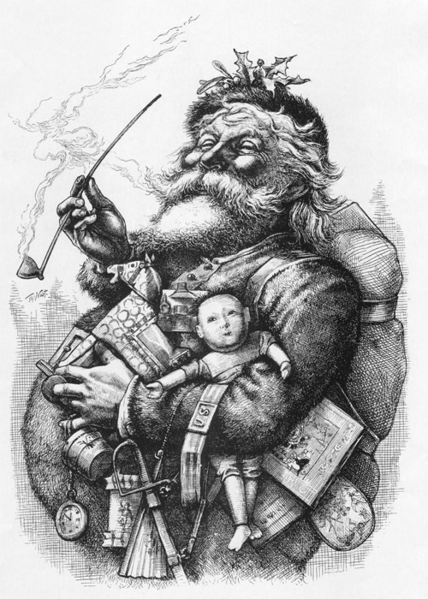 CFN – Many years ago, during the Nixon administration in the U.S., Vice-President Spiro Agnew once called the press“the nattering nabobs of negativity.”

Perhaps that chestnut of a phrase, which was actually penned in a speech for the Veep by William Safire, could be applied today to the folks who wish to reign over language and culture with the sanitization that is political correctness.

How else could you explain the idea of taking a poem that is a Christmas classic, written by Clement Clarke Moore back in 1822, and changing it for the sake of appeasing today’s sensibilities of removing anything a child might see or hear that has a negative connotation?

I am referring to Twas The Night Before Christmas, also known as A Visit from St. Nicholas. Recently a Canadian publisher removed all references of Santa’s smoking from the 200 year old verse. In the updated version you will no longer see the line, “The stump of a pipe he held tight in his teeth, and the smoke it encircled his head like a wreath.”

While I have no doubt that the publisher did this with good intentions, altering the work of a classic poem to fit with modern times is censorship at worst and just plain wrong in the world of common sense.

I know smoking in today’s culture is considered a heinous, cancerous culling of the herd, but if we are to continue down this dangerous path of rewriting artistic history, where will it end?

Well, let’s stick with Mr. Moore’s work, shall we? This is a 14-verse poem and the offending puffing doesn’t take place until the 11th verse. There are things to worry about right from the start.

In the first verse we learn that the house might have mice. Surely this isn’t a healthy environment to bring up a child. These little rodents carry disease, after all.

In the second verse the children are dreaming of sugar plums. This is just the gateway to an obese society.

To me, the most offensive part of the poem shows up in the eighth verse. This is where we first learn as children that Santa Claus specializes in breaking and entering. In today’s world we spend a lot of time concerned about security. We lock our windows and doors at night, set the alarm, and some keep weapons near or under the bed. Yet, we seem to welcome a jolly old elf who sneaks into our house at midnight. Shouldn’t this be a bigger concern than his personal vices?

And let’s not forget the elephant in the room here. Santa’s fat! With a sleigh full of toys his girth is overtaxing the strength of a mere eight tiny reindeer. Isn’t this animal cruelty? (And by the way, he also wears fur from head to toe!)

And speaking of reindeer, there are those who say that this method of traveling might be a greener, less polluting way to ride. Well, have you ever been in a parade following the horses? Now imagine they could fly?

And what do we really know about this Santa character anyway? He spends his time with elves, he knows each and every child, keeps meticulous lists on them, but has no kids of his own. Don’t we usually call somebody in cases like this?

Okay, in the last paragraph, I mixed up two Christmas classics, Twas The Night Before Christmas with Santa Claus Is Coming To Town. But I did for a very valid reason. If we continue to sanitize works like a 200 year old poem, then how can a song that only dates back to the 1930’s survive the politically correct wrecker’s ball?

How about we just let the classics stand on their own merit and read them to our kids? If the little darlings have questions about the content, use it as a teachable moment and move on, all the while marvelling at how forward thinking your little DNA project has become. After all, you’re in for a lifetime of tough questions and teachable moments with your kids anyway, so what’s one more?

As a child I never questioned Santa’s smoking (and I come from a family of non-smokers) or even his annual breaking into my living room. Personally, I was more freaked out about the Tooth Fairy sneaking into my room and going under my pillow, while I was sleeping on it! But that’s a therapy session for another time.

That’s the Stuph – the way I see it

Peter Anthony Holder is a Montreal based Writer & Broadcaster.   You can check him out also on his website or blog.