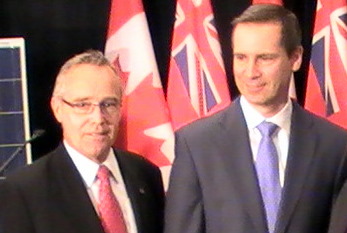 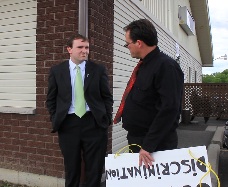 CFN – Ontario Premier Dalton McGuinty finds himself with the highest approval rating in his province after the Liberal AGM with higher ratings that NDP’s Andrea Horvath and the poor Conservatives who at this point must be looking for a dark hole to dump the political corpse of Tim Hudak into.

However he himself is in a twilight zone spot.   When you have to “buy” your support as his alliance with the Teachers and Unions eventually a time comes when you just might not have the money to continue to pay for that support as we are seeing now.

Will the Teachers and Unions drift back to the NDP and would that be enough to topple his government?

And could it in fact have been a former teacher that has derailed our Premier from the “bigger picture” which would be the natural shift for Mr. McGuinty to Federal politics; a trajectory that stopped cold after missing a majority by one seat; in particular SD&SG which had been red for two terms under MPP Jim Brownell?

Sure enough the Big Blue Machine in SD&G, chiefly engineered by North Dundas Mayor and Exec Assistant to MP Guy Lauzon Eric Duncan led to similar results for new MPP and beneficiary Jim McDonell, MP Guy Lauzon, and Eric’s own toppling of a long time incumbent to win his mayoralty.

The failed opportunity to snatch his majority with two recent by-elections after giving a Conservative MPP a plum government position also tilted the winds of success away from our Preme who now sits with a financial mess and NDP leader Andrea Horvath subtly pressing buttons hoping to tip McGuinty and eventual election.

Having seen the NDP & Conservative alignment in the Federal realm (it was Jack Layton that pulled down the Martin Liberal government and the Orange Crush that gave Mr. Harper his majority) does Mr. McGuinty have many options?

And that dear viewer is the money question.    Is Dalton McGuinty a spent force?  IF the answer to that question is yes where does that leave the Liberals strategically?

It should be an interesting Spring as many feel that’s when a new election will be triggered.   Mr. McGuinty’s only hope is to find the magic path to gaining a majority victory.