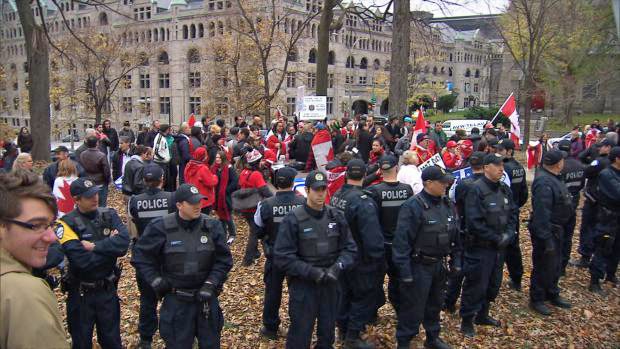 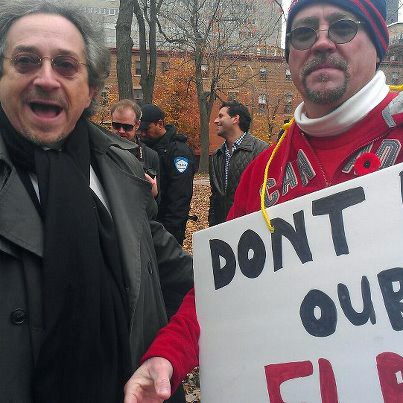 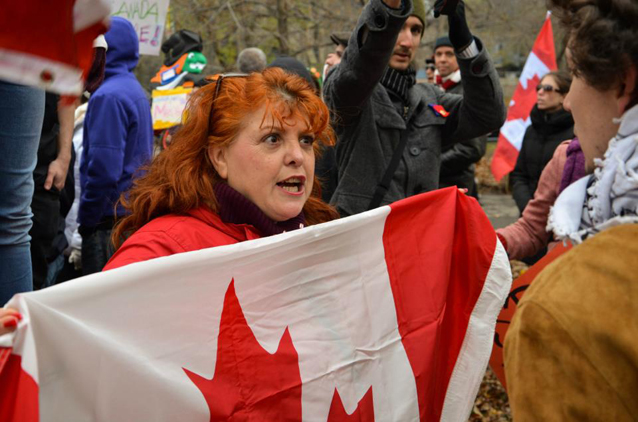 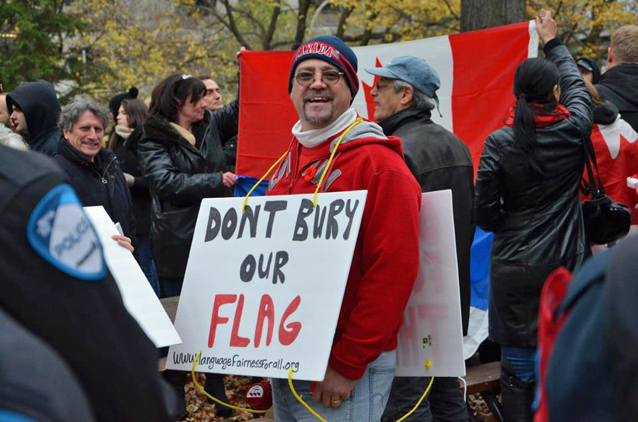 CFN – Some members of the local language rights group Language Fairness for ALL (LFA) spent a cold, wet Sunday afternoon at Place du Canada, in Montreal Quebec, supporting the Quebec Office of the English Language Unity Rally Against Discrimination.

Upon arrival, the situation was quite intimidating, as 50 or so Quebec police had formed a human shield between two groups of people. Around 200 supporters were peacefully demonstrating, most carrying Canadian flags. In contrast there were also around 40 non-supporters, including a Pro-Separatist Group of young people wearing “red squares” & the Quebecois Patriotic Militant accompanied by it’s founder, Serge Provost, who were antagonizing the crowd chanting, “FLQ, SOS”. I was warned to avoid the ones dressed in camouflage as they were militia & could potentially be dangerous.

Prior to the police involvement, a QOEL member, Antoinette Mercurio, was attacked by young women. Mercurio stated, ” a young girl grabbed my hair from behind and jerked my neck”. LFA was welcomed by members of the QOEL, including leaders and organizers Hugo Shebbeare & Jimmy Kay. Initially, President of LFA Christopher Cameron was a little taken aback when Mr. Kay presented him with a Quebec flag by planting it on his chest. After some tense moments, Mr.Kay told Chris he was a proud Canadian & Quebecer too. The two men found common ground & united in the demonstration. Originally, this rally was created to denounce the removal of the Canadian flag from Quebec’s National Assembly following the Parti Quebecois recent election victory and it quickly morphed into something greater; a rally to unite Quebecers against political segregation, language discrimination and especially any kind of violence.

Earlier in the day, Beryl Wajsman, Editor of The Suburban, gave an inspirational speech to the crowd, speaking of the “politics of division” that many believe now define the politics of Quebec.

“When you demonize and marginalize minorities-whether because of language, or religion, or creed or ethnicity,” said Wajsman, “…you validate prejudice.”

Sadly, Wajsman’s speech was interrupted by what some described as “anarchists” with loud chanting & disruptive behaviors. Never-the-less, the speech continued and the crowd loved it!

He finished his speech by saying, “Many of us were born here, others arrived to choose freedom. We live here and this is the land where our peoples are buried. We’re not going anywhere. J’y suis, j’y reste.” A young woman caught my eye wearing a hand made red t-shirt reading 101 with a large X through it and “Help Us” underneath. This woman is a Canadian just like I, although I am from Ontario and she from Quebec. We both fight oppression & discrimination through language. A true democracy would have no place for language laws and together we will fight to end this language apartheid. This is why Language Fairness for ALL chose to travel to Quebec & HELP our fellow Canadians. As Thomas Jefferson so eloquently stated,” If a law is unjust, a man is not only right to disobey it; he is obligated to do so.”

The rally ended with the crowd uniting together in a circle, holding hands and singing O’Canada.

I am proud to have joined in this momentous event, knowing I helped my fellow Canadians fight language discrimination. Below is some footage LFA shot at the rally.

Article submitted by Debbie Cameron of Language Fairness for All.