By Don Smith, Former CFN on November 7, 2012No Comment 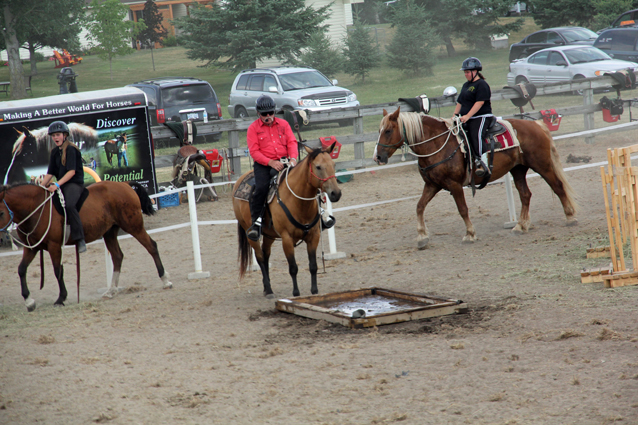 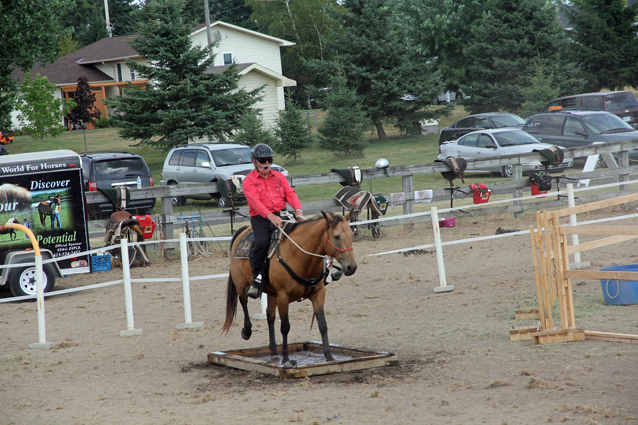 Eventually she came around

The Three R’s
No I am not talking about “Reading, Riting, and Rithmetic”. That’s Humanville and things are different in Horseville.

I am talking about Relax, Retreat, Repeat.

When your horse begins to lose confidence, the best thing you can do for him is to retreat and then re-approach. Relax then retreat from the threshold he is fearing, the obstacle he is unsure of, the manoeuvre he doesn’t understand or the objective he has no clue about. It is very hard for humans to get in the habit of retreating. We have this innate instinct to encourage, to coax, to push, but doing this with horses is akin to pushing him off a cliff. For horses, loss of confidence increases and fear intensifies when we force them to approach and reduces when we allow them to retreat. The loss of confidence is the first phase of fear so if we can learn to recognize the loss of confidence early on and deal with it, we can reduce the chances of increasing his fear and anxiety.

How To Retreat
To retreat means to back off, back away, move away, withdraw, give ground, leave, do less sooner. So when your horse hesitates, back off, wait, or move away or even leave altogether.

If he is having trouble with an obstacle, move as far away as necessary but try to keep his nose pointed toward it. Circle the object or drift away from it, but try not to turn him directly away from it as this might spark a flight response from him. So keeping his nose tipped toward the threshold is best for your safety. For some horses their first response is to start backing away. Sometimes this is a good indication that he is beginning to become unconfident. Allow him to back away if he offers so his nose is tipped toward the source of the problem.

If you are introducing a new manoeuvre to him and he starts having trouble with it, back off instead of trying to do more of the same thing. Remember that ‘Slow and right beats fast and wrong.‘ You might have to postpone the lesson until he is in a better frame of mind or until you have a better plan that he can handle.

If he is having trouble with something you are doing to him such as touching his ears, etc. move toward the offending area and then away from it or quickly go past it so he doesn’t have time to realize that he should be worried. Keep repeating until he is finally confident enough to allow you to go all the way. Remember give him the best deal possible.

When we retreat it helps our horse become calmer. Then re-approach. But do not re-approach until he is calm or you will just succeed in making things worse. If you don’t wait, you may find that all of a sudden he will for no apparent reason blow up or shut down. This may happen today, tomorrow or even months down the road. Most people don’t see it coming.

The more you push your horse over his confidence thresholds the more unconfident you make him. But as you feel your horse approaching a threshold and retreat from it, then retreat and re-approach as many times as necessary. All of a sudden the thresholds will reduce and eventually disappear. Real mastery will come to you when you recognize the thresholds even before your horse feels them.

When we used to go out on the trail with my students for a ride, often the lead horse would encounter a threshold and would baulk. If we tried to push him through the threshold not only would he begin to react but all the other horses would as well. Well actually there was one that didn’t, my old horse Shotgun. Whoever was riding him would simply bring him to the front and he would just go ahead without any problem, such was the trust he had for his rider. Then the other horses would follow along.

How Far to Retreat
If it is just a hesitation, then waiting on the spot until the horse relaxes may be enough to allow him to move on. But if he is really afraid, overreacting, frantic, then you need to move away as far as necessary until the horse can relax. This is why using long lines is a good safety measure with a horse you are not sure about.

Barn Sour or Barn Sweet
You may have heard the term ‘barn sour’. This is when a horse just doesn’t want to leave the barn on a ride or runs uncontrollably back into the barn. I rather like the term ‘barn sweet’ because the horse really just wants to go back to where he is most comfortable, his home. The scenario may start with a slight hesitation to leave, and then rider urges him on, pushes him harder to go further, maybe even spanks him and suddenly he spooks at something, whirls around and gallops back into the barn or arena with or without his passenger.

Now the horse is losing trust in you to protect him, gets really scared and overreacts. He does just what every self-respecting prey animal would do, save him self, run for his life. And oh yes, don’t trust that human again.

The right thing to do is to respect that original threshold, retreat, and keep retreating. Soon the horse will come to realize that you are not going to throw him over that cliff and push him when he is unsure. Progressively he will begin to trust you more and more and then go wherever you suggest. It is a lot like working with a young child.

In the end it is about how confident he is in himself and in you and about how much trust there is in the relationship between his leader (you) and him (your follower).

In the photo today you will see a right brain extroverted horse approaching a water obstacle at a horse show. She was very reluctant to try to go through the obstacle, but after several retreats and re-approaches she calmly and trustingly passed through the obstacle.

Of course all of this takes patience, but it will pay big dividends in improving the relationship between you and your horse.

Think outside the box
From time to time I receive questions from people on how to correct a problem. Here is today’s question. What do you think?

When using bits with a horse, a problem that can develop is when the horse puts his tongue over the bit instead of under it. This can cause problems with your control of the horse and in his confidence. What would you suggest to do to fix the problem?

Be sure to click on the ‘like’ or ‘dislike’ buttons to let us know that you have read today’s column. It is an honor to have you as a reader. I welcome any comments, questions or topics you would like me to discuss. I hope you enjoy reading about the wonderful world of horses and the impact that natural horsemanship can have in making it a better world for both horses and humans?

In our ‘Spirits in Unity’ program we believe in developing a trusting relationship and a true partnership with a horse before even thinking about getting on his back. He probably prefers it that way too.