By Don Smith, Former CFN on December 6, 2012No Comment 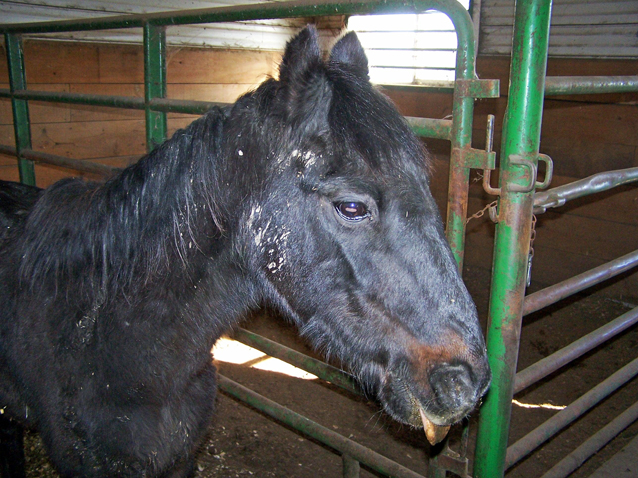 Do Good People do Bad Things?
I should warn you that this week’s column will bring both tears of joy and saddness to your eyes.

After years of my horse’s best efforts to make me realize that I wasn‘t treating him the way he wanted to be treated, I finally got the picture. That last concussion he gave me finally started to make me realize that I was on the wrong track. Oh, I kept telling myself that I really did love him, but my actions did not express love, but only ignorance. There is an old saying that goes, ‘You don’t know what you don’t know until you know it’. Thanks to Pat and Linda Parelli and other horsemen, I now have the knowledge to understand how my horses think, learn and play. I understand why they behave the way they do. And I have learned how to interact with them the way they want.

Some people have pointed out to me that maybe I shouldn’t be so critical of others who abuse their horses since I was once an abuser myself. Some abuse is out of ignorance. To some extent I can understand that. But maybe if I had met someone who was willing to tell me the truth, I would have smartened up. I don’t have; however, much tolerance for people who inflict severe pain or suffering to the extent of injury on their animals.

Cruelty towards horses continues to exist but thankfully those people are in the minority.

In today’s column I am going to tell you about some horses who have suffered at the hands of these cruel, unthinking horse owners many of whom try to justify what they are doing in the name of good training techniques. Thankfully, the number of people out there who are getting the message and are trying to make it a better world for horses is increasing.

Bill Pretty is one of those people who love horses so much that he have dedicated himself to giving horses. who would not otherwise. have a better life. In fact all of the horses he now cares for did not always have it so good.

One such horse is a sweet little Hackney Gelding about 25 years old named Stepper.

Early on in Stepper’s life journey he apparently became a world champion driving pony and won all kinds of ribbons and trophies for his owner.

Bad People do Bad Things
Stepper’s previous owner docked his tail (cut it off to shorten it). Who knows what barbaric method they used.

Stepper was also severely beaten by the same owner. At one point he fell to the ground after a beating and he had his tongue tied until nerve damage killed all sensation in it making it difficult for him to eat.

Good People do Good Things
The good news is that after all this rough treatment he ended up with a wonderful woman and good friend of Bill‘s. He was with her for a number of years as a companion to her daughter*s Arab gelding. There they were both spoiled rotten.

After a while her daughter gave up the Arabian, and Stepper went to live with another friend of Bill‘s, who also rescues unwanted horses. She used him as her ‘baby sitter’ when she had newly weaned foals who needed a buddy. Eventually she had too many horses to care for, so Bill agreed to take him in.

It is a testament to the resilient nature of horses that this little guy is such a wonderful horse, after everything he went through. He is very affectionate, and comes running like a dog when you call him! His barn manners are perfect.

Health wise he is doing okay for a horse his age. Because of his age and his tongue problem, he is on a special diet. He can’t really eat grass or hay very well even though he gives it his best shot, so he gets soaked hay cubes and Equine Senior twice a day.

He could really use some dental work, but that will have to wait for a while. Bill and his wife Donna love him dearly, and are dedicated to giving him a happy home for the rest of his life. So Stepper is one of the lucky ones who now has found a place where he will live out the rest of his life in peace.

Tail Docking
This is the practice of cutting of the tail of a horse in order to shorten it. This is often done to carriage horses. In a previous column I told you about my uncle and an incident I witnessed when he struck his Belgian Draft horse over the head to discipline it. His depravity didn’t end there. My dad once told me how he docked his horse’s tails. No he, didn’t have some vet surgically shorten it with the use of pain killers etc. He simply laid the horse’s tail over the edge of the stall and whacked it off with an axe.

Tongue Tied
You may be wondering why anyone would tie a horse’s tongue down in the first place. Often it is done when a horse has a tendency to put his tongue over a bit, which is not a good idea. So people go to all sorts of lengths to keep the tongue under the bit and one of those methods is to take a leather thong and tie the horse’s tongue down so he can’t put his tongue over the bit. There is a horse in our barn at present who suffered this practice.

When his owner visited her horse at the trainer’s establishment, she was horrified to see that he had been cut around his muzzle. Even though she had left specific instructions that no severe methods should be used in training her horse, the trainer told her that sometimes you “just have to do what you have to do” in training horses. The trainer went on to admit that she had even cut off a horse’s tongue with this practice. Why would she even admit such a thing. Why not just tattoo the word idiot on her forehead so everyone she meets will know what she is really like. And this is a person who well regarded in the horse community in these parts.

Fortunately her beautiful mare has fully recovered from both the trauma and injury and is now being used by young riders and is proving to be a wonderful horse.

Two years ago I attended a prestigious horse show in Toronto. There was a particular class that I wanted to see, the Saddlebred class. Having had one of these magnificent animals, I wanted to see what the elite in Ontario’s Saddlebred industry had to offer. During one of the classes, the judge stopped the class in midstream and approached one of the riders. I watched as he untied a shoestring from the horse’s mouth, which was at this point bleeding. What astounded me most was the fact that the competitor was not reprimanded or banished from the class. Why could the judge not make an example of her. I found out later that 12 of the fourteen horses in the class came from one establishment. You see they didn’t want to upset the barn owner for fear she would pull her horses out of the competition.

I guess it still comes down to winning ribbons and money in many cases. Even though there has been a lot of improvement in the regulations from governing bodies, there still needs to be a lot done.

Soring
Soring is the practice of over sensitizing by mechanical or chemical means the legs of horses in order to make them step higher in various competitions. This was a common practice in the Tennessee Walking Horse community for many years, until the outcry became so strong that they finally started to clamp down on the practice. In one single year there were over 1,000 suspensions handed out to people who refused to follow the more humane guidelines. Some of the breeders complain that they were put out of business because of the new rules. Good riddance.

Warning: The following video shows graphic scenes of violence towards horses. This video will dramatically show you what soring is all about. Thankfully the worst of all these perpetrators received a large fine and three years in jail.

There is a horseman by the name of Craig Johnson, who many credit with having changed the face of the reining industry, where many cruel practices were inflicted upon horses in order to obtain ribbons. Craig was one of those individuals who put his principles of good horsemanship ahead of his desire to win. He failed to win a number of competitions because he stuck to his principles, but people noticed the difference in the way his horses performed and gradually began to improve the sport. In one case, it was discovered that one particular consistent winner in reining competitions had actually drilled holes into his horse’s teeth so that he could wire the bit into the horse’s mouth and get what appeared to be a more delicate control. When this was discovered, a simple rule change eliminated him from further competition. Now the bridle must be removed after the competition with a judge present. Of course our consistent winner could not do so and was never heard from again.

Recently an young girl joined our ‘Spirits in Unity’ program and I asked her why she left her other barn. She said she didn’t feel right when her instructor kept telling her to smack her horse with a crop to make it do what she wanted. Kids are more empathic to abuse than a lot of adults. This young girl chose one of our most difficult horses, but even after only a few weeks of learning how to use psychology and understanding I am amazed at the connection that the two of them have.

Fortunately there are many really wonderful horsemen who don’t resort to cruel practices. The following are just two examples of how using techniques that preserve the horse’s dignity can be so effective. Here at Drogheda Manor we try to help people learn to dance with their horses. These two videos show how master dancers can do it. And you can too. I hope these videos will help lift your spirits.

Good People do Good Things. Thank goodness for all the good people.
In our ‘Spirits in Unity’ program we believe in developing a trusting relationship and a true partnership with a horse before even thinking about getting on his back. He probably prefers it that way too.

Until next time…
May all your dreams come true,
Garry “Horsetalker” Meek