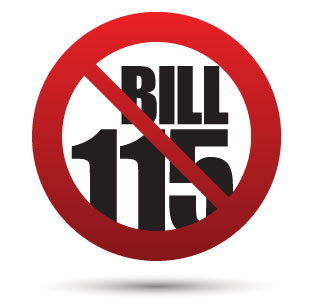 CFN – Despite a cold day, St. Lawrence Secondary School students were protesting at the front of their school against the Bill 115 which was passed by the Ontario Government on Sept. 11, 2012.

Bill 115 act is taking away the teachers rights to negotiate salary, amount of sick day benefits and prevents teachers from striking. So, in return the Ontario Secondary School Teachers Federation has decided to fight back by asking teachers to give up some of their extra work to gain awareness. This includes cutting out school dances, sports, clubs and student council related activities.

Coincidently enough Bill 115 is also called the “Putting Students First Act, 2012”. This has grabbed a lot of attention by several students across the GTA as they feel this is not exactly what you call putting students first since the act is taking away what students love.

The whole reason behind why St. Lawrence students were protesting today was to voice their opinion.

“We want to get people to take notice of Bill 115 to show that we as students won’t be used as pawns.” says organizer Josh Welsh who also had the idea of the walk-out. “We don’t appreciate the extra-curricular activities getting taking away from us.” He added.

“I feel it’s not right to put students in the middle.” said Welsh.

Ghania Nasir a grade 12 student protester, “The Bill was only supposed to affect the teachers and now it’s affecting us, the students! This isn’t fair one bit and we don’t agree with this.”

Student council representative Edward Ross says, “This decision has caused so much fear and unrest in the student body. It leaves students in a position where they cannot participate in school outside of class” adding to the fact “which many education leaders say is most important after grades”

There are possibilities of more than one walkout for St. Lawrence students, who were only going to have one walkout in the first place and be “professional” about it. Welsh stated, “I along with other organizers of this event are thinking about having more walkouts, but more research has to be done before anymore happen.”

Students at CCVS, Char-Lan District and Rothwell Osnabruck also had walkouts today. There’s no doubt that students across the GTA are fully aware of this situation, but how aware are the communities? According to Welsh, “They might need a bit more awareness.”

Bill 115’s provisions will effectively take place as of December 31. Students are hoping to make a change and turn things around. They simply want everyone to be happy in the end.

Welsh says, “We’re hoping they come to a consensus, that in the end won’t hurt either party.”

If you wish to help stop the Bill 115 Act, click the following link below and sign the petition.