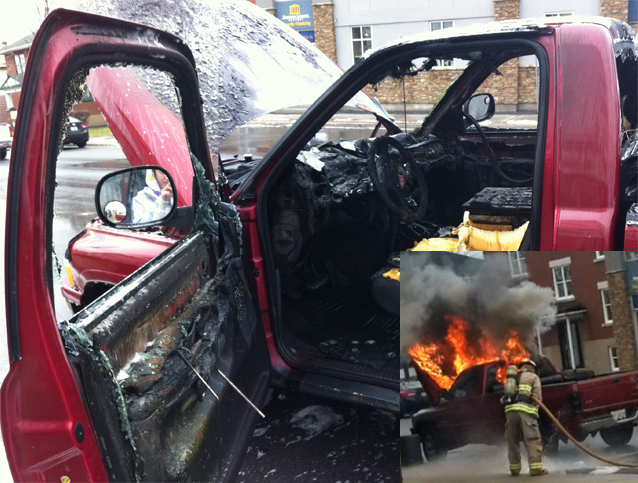 CFN – Carole Givoque and her employee Samantha Brown found things quickly heated up at their Pitt Street Luc’s Barbershop & Hairstyling over the noonhour today.  They saw the driver of a 1998 pickup truck attempt to start his vehicle, then quickly flee and moments later his passenger was also hightailing it down the street as the truck burst into flame.

Apparently the truck, which was parked directly in front of their shop, was purchased used.  The two women tell how the fire started in the glove box area and quickly spread to encompass the entire passenger compartment.  They are very glad that no one was injured, but also wish to see the remaining debris cleared to prevent damage to other vehicles that park in that area. They praise Cornwall firefighters for their quick response to contain and dowse the fire, which they felt threatened their own safety inside their store which is lacking in windows and doors other than on the front of the building.

The section of Pitt Street near Eighth Street was closed to traffic for approximately a half hour while the fire was dowsed and major debris removed.