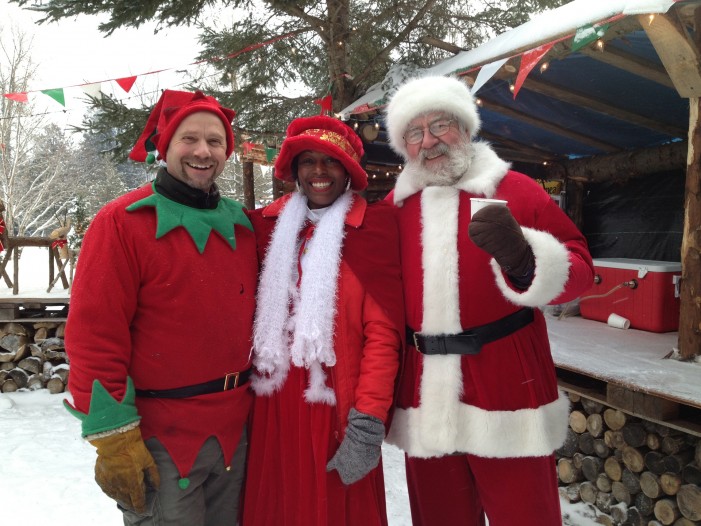 CFN – Santa’s Village Dalkeith finished out the season with a phenomenal bang!  Frigid temperatures and mounds of snow didn’t prevent kids and parents alike from flocking to the village during December 2012 to experience the magic and excitement of this unique winter wonderland destination.

“It’s all about putting smiles of kid’s faces,” says founder and head elf Andy Scherer. “We had such an amazing team of elves who completely embodied the spirit of fun, so much so that it was difficult to tell the elves from the kids half the time!”  He added, “We are all so inspired by the positive response and the turn out that plans for adding to the Village for the 2013 season are already under way!”

Students from Vankleek Hill’s Pleasant Corners Public School and St. Jude Catholic School enjoyed a field trip to the village along with visitors from as far away as British Columbia, the Maritimes, Switzerland and Australia.  Thousands of pictures were taken, over two hundred and fifty pounds of non-perishable food was collected for the Food Bank, two thousand marshmallows roasted, three hundred liters of hot chocolate consumed  and two hundred plus Christmas trees selected and during the nine days Santa’s village was open.
From the moment the gates opened on December first, positive feedback about Santa’s Village Dalkeith began to spread throughout the community and beyond resulting in a record attendance and a reaffirmed commitment to do it all again in 2013!  Santa and the elves would like to thank the community for such generous support.  Andy summed up the experience this year by saying, “We are proud to live among, work with and most importantly, play with you all!”