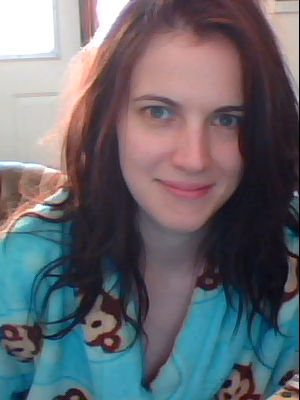 CFN – Aimee Davison talks alot.  And she’s reversed a trend in that she’s migrated to Quebec as opposed to leaving it; but Pauline Marois and her PQ government’s policies have irked the Actor, Model, and Internet Diva to the point that she’s decided to not speak French anymore  in certain situations and went to the web with her message.

Aimee & I had a chance to chat yesterday and this is part of our chat which went far and wide subject wise besides the strange oddness that is Quebec politics.

CFN
So I watched your video about the weirdness that is the language of French in Quebec.
I then started to check out a bunch of your other videos.
Most of your videos are entertaining.  This one seemed hyper political.  Why?
Aimee
I sometimes make political opinion videos when I am passionate about a particular issue.
CFN
But you’re not born in Quebec.
Is it fair for an outsider to take your position compared to someone that’s born and suffered there or an ex pat like myself?
How have you suffered with language weirdness in Quebec or is it Montreal in particular?
I find most of the weirdness language wise is centered in Montreal?
Aimee
I’ve lived here for 13 years.
I think that’s long enough to form an opinion about language issues in Quebec and francophone versus anglophone tensions.
Language weirdness… lol… funny term.
Aimee’s 100 Job’s Promo video
CFN
So what are some of your main issues when it comes to language that you’d come out with such a strong position?
And what do you think the return reactions will be?  Have you had to explain your position to locals and French friends?
Aimee
(don’t quote my LOLs, please

CFN
yes dear
Aimee
I’ve mainly lived and worked in Montreal so I have mostly experienced language issues here.
CFN
Can you give a few examples so people can get a grip on your reality?
Aimee
I wouldn’t be able to say if I would experience the same issues outside of Montreal, but given the Parti Quebecois’ aggressive protection of the French language and separatist or French nationalist policies, I am sure I could experience tension elsewhere in Quebec.
CFN
Gotcha, but have you actually had any particular experiences or instances of language weirdness?
Have you lost a job or been verbally abused?
Did anyone kick you in the shin or force you to eat Cretons?
Tie you down and listen to early Celine Dion albums?
Lock you in a closet with Youppi?   Force you to watch French Soap Operas?
Aimee
My main issues with language in Quebec is the attempt by the government to legislate it out of legal and common usage and to prohibit children from learning English in schools. I fail to understand why French is seen as superior in Quebec and why the government feels that they are entitled to “protect it” at the expense of other languages.
I support freedom of language choice and I have never forced a French person to adopt and use English, so why is the reverse being done to me by the Quebec government?
CFN
So mostly your issues are with Madame Marois and the PQ government?
Aimee
In terms of reactions to my arguments, my friends and family, some of which who are francophone, are supportive. I also receive positive feedback from anglophones experiencing the same frustrations and sense of alienation caused by the current provincial administration. Francophone separatists are the people who most strongly oppose my position, which is unsurprising.
CFN
As of this interview your video has been viewed more than 6,000 times on You Tube.
Have you received much response to the video itself from viewers or the public?
Aimee
When I refuse to speak French in public in an act of protest, most francophones simply switch to English without any problems. There are some who attempt to pressure me into continuing the conversation in French, but most are accommodating. If someone I encounter in public clearly doesn’t speak English, I will switch over to French.
Before my decision to stop speaking French in public as an act of protest, I would usually switch to French as soon as the person I was speaking with did.
CFN
So if I’m understanding you so far you’ve actually had no problems or issues in life via the language weirdness other than with Ms Marois and her wacky band of Linguistic Banditos?
And get along great with your fellow Francophones?
Btw, which part of Ontario are you from?
Aimee
Yes, though one example I can think of was when I worked for an American client in the summer handing out lunch bags for donations for Hunger Awareness Week and two people were very rude and aggressive said to me,
“C’est en français ici au Québec!”
and handed back the donation bags because they were printed in English.
One of the men asked if he could have the number to my supervisor so he could complain, but I talked him out of it, in French.

I received many comments on my YouTube video, some of which were so abusive that I had to delete them.
Some comments were that I didn’t deserve to live in Quebec, that I was a part of the female anatomy and that I am a bigoted cow. Most of the abusive comments were written in French and one commenter was arguing with other commenters in English but would only address me in French.
CFN  Do you think your video will change anything?
Do you think it will hurt your work options when employers see it?
Aimee
I moved to Quebec because I am half Franco-Ontarian and I wanted to perfect my French.
I studied it at school from the 4th grade and graduated from a bilingual high school
in Alberta.
I think my video will reassure anglophones that if we stand in solidarity to resist the discriminatory policies of the Parti Quebecois we can ensure that we will maintain our linguistic freedom.
I work for myself, producing content for several YouTube channels (Onehundredjobs, LOLpervs, ConfessionsofVenus and FashionAmbush), write for a men’s website and host a radio show on CJAD News Talk Radio, so I am not worried that I will lose my job. Most of my clients are American, as well. The only time I work in French is when I model.
CFN
Busy girl!  We’ll have to try and find a way for you to write for us too

Aimee
I don’t think anglophones refusing to speak French will heat up tensions, as most  francophone and anglophone people are nice. It’s the government that should fear the brunt of an English resistance.
CFN
So switching gears if this was 1993 instead of 2013 what would Aimee be doing for a living?
Aimee
I think it is unlikely, at least in Montreal, that speaking English will cause you to be beaten up, though I did hear of several disappointing cases where people working for Montreal’s public transit agency (STM) reacted violently to clients speaking English.
CFN
true
I think I type faster than you

Aimee
I would be writing, modelling and continuing a career in television and radio. The only thing I couldn’t do in 1993  for which there was no equivalent that I am paid to do now is release Internet media in the form of web videos and blogs.
I’m typing longer sentences. lol
CFN
hmm…
So how did you get into the internet biz?
Aimee
I first started writing online for a parenting blog when I was pregnant with my child in 2000. I was one of the first mommy bloggers before that was even a thing! It was called “Aimee’s Conception Chronicles.” Then, I wrote for Askmen.com as a man (I used male pen names) between 2001-2003. I quit the net for a while and focused on acting and modeling through agencies, as well as writing a few articles for the West Island Chronicle, and then in 2008 I launched my first web series, Fashion Ambush, for which there is 4 episodes, when it was rejected from a television production company. After seeing that Fashion Ambush only amassed several thousand views per episode and I couldn’t run ads on it because YouTUbe rejected me from its partner program, I switched to doing a project in 2009 where I worked at 100 different jobs for a minimum of $100 each. That wrapped in 2011 and I was finally accepted into YouTUbe’s partnership program, so I started vlogging like the video you saw and producing media on LOLpervs.
CFN
You Tube rejected you and not Miss Hannah Minx?

Aimee
Hard to believe, isn’t it? lol
CFN
I have to chase that one a bit further.  Do you need implants like Hanna and others to get the big numbers on You Tube?
Are we that plastic a society?
Could you do that?
Would you sell your soul for Rock n Roll?
You did one video with someone that clearly had a lot of work done.
Are women forced to do that compared to men?  I mean, you don’t see Terry DiMonte getting breast implants…
Aimee
Not at all. You just have to use what you have got to attract the most attention as possible and appeal to a younger audience. You also need to know how YouTube’s algorithm works to drive traffic and referral views on YouTube. Trending topics in traditional and social media are one of the best things to produce media about on YouTube to get views, currently  unless you come up with a hit show format like Epic Meal Time, which is very difficult.
Being sexy and a woman actually opens you up to more harassment on YouTube.
I like my chest the way it is and can use gel inserts, so no. lol
Although I did lobby for sexy equality on YouTube:
http://www.dailydot.com/business/youtube-boobs-reply-girls-advertising/
CFN
So where do you see You Tube and Social media going vs traditional media?
Aimee
I was cautious because I had been harassed by teenage boys last week because I defended the girls who were being psychologically abused in the #cutforbieber hoax.
CFN
I lived on Crescent Street across from Hurley’s in 1995.  I honestly thought it was all done then…
now we’re nearly 20 years later and they want to pick on itty bitty kids in school…
Aimee
I hope that today’s francophone youth will embrace bilingualism and inclusion instead of the xenophobia of some of their parents.
I also thought the language nonsense was dying down until the student protests and the most recent provincial elections.
I was horrified when Marois was elected with only 32% of the popular vote.
I think the student protests paved the way for the resurgence of a separatist agenda.
CFN
So true.  It was pure PQ politicization of an issue near election time.   And on that note I think we’re just about  done.   Last word to you Aimee.
Aimee
The protests proved that with enough public pressure, any minority group can change things to their suiting, and it instilled more public distrust of the Liberal party.
To learn more about the talented Ms Davison check out her website;  AimeeDavison.com
.
So Canada should we stop speaking French in Quebec as a protest?    Please post your comments below.

CFN interviews Montrealer Aimee Davison – Should Anglos Speak English Only as a Protest & a lot more! VIDEO added by admin on January 14, 2013
View all posts by admin →

16 Responses to "CFN interviews Montrealer Aimee Davison – Should Anglos Speak English Only as a Protest & a lot more! VIDEO"