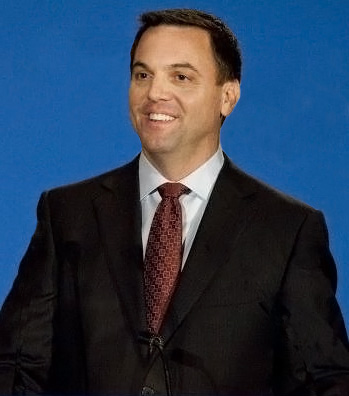 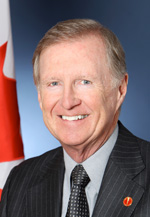 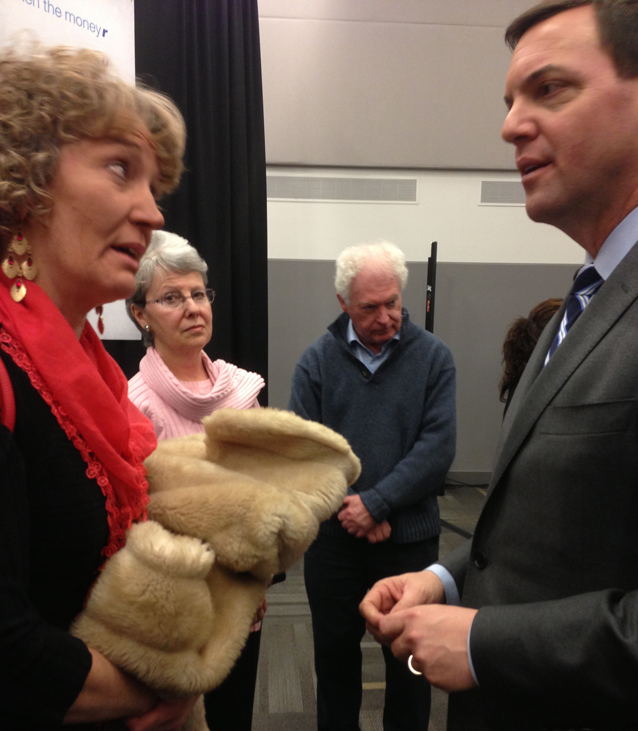 CLF's Beth Trudeau with Hudak after his presentation

A delegation from Canadians for Language Fairness (CLF) and Language Fairness for All (LFA) attended Ontario Progressive Conservative Party LeaderTim Hudak’s meeting on Monday, January 21st at the Ottawa Convention Centre. Hudak spoke about the economic tragedy that Ontario has become under the nine-year stewardship of Dalton McGuinty, leaving us his legacy of a $235 billion debt and $12 billion deficit; and from being the economic engine of Canada to a shameful “have-not” status.

Hudak took a mere three questions from the floor and we did not have the opportunity to raise questions about the plight of the English speakers of Ontario. Our Beth Trudeau presented him a package afterwards (see photo.)  In light of this, we’re communicating our concerns via this Open Letter.

From: Canadians for Language Fairness

We are very concerned that you are avoiding tackling the issue of the problems being caused by the French Language Services Act, 1986. This Act was passed under the most nefarious condition:

1. Also known as Bill 8, our “French Language Services Act” was passed under a cloud of secrecy, on November 18, l986.

2. With miniscule media coverage and no meaningful public discussion, no reference to a standing committee to take a look at what the implications of the legislation meant to Ontario.

3. With 70 of 125 members absent, and no recorded vote, residents of Ontario awoke to a done deal!

4. Never did the residents of Ontario give the former Liberal Premier David Peterson a mandate to proceed with this legislation. The Bill was passed almost entirely in the French language, and recorded in French in the Hansard Report (the public record), for the overwhelmingly (about 86% in l986) English-speaking residents of Ontario.

5. Only after permission was granted for an exception to the rule, was an English translation of the Bill provided, and it is hidden away under a different date!

6. An Ontario (Conservative) MPP, Bob Runciman, is on record as stating that “the wholesale extension of French language services in Ontario represents a horrendous waste of tax dollars, whose passage in l986 marked one of ‘the blackest days’ in the history of the (Ontario) Legislature”.

Our questions:
1. “There are currently 25 designated areas under the FLSA. For an area to obtain designation, technically, Francophones must make up at least 10% of its population; urban centres must have at least 5000 Francophones”. Can you please define “area” – is this synonymous with “municipality”? Would an “urban” centre refer only to “city” or does it include “town” & “village”.

3. Does this Act include forced bilingual signage for private businesses? If not, should this be allowed by townships without the province’s prior approval as language is the purview of provincial governments? When townships pass by-laws enforcing bilingual commercial signs in only English & French, would this not be considered “ultra vires”?

4. If the Ontario PC were to win a majority government, will your party do anything to reduce the scope of the FLSA so that English-speaking Ontarians will no longer be at such a great disadvantage when it comes to finding jobs as bilingualism is becoming more and more of an obstacle to our citizens? You must be aware that our unilingual citizens are having to leave the province as too many jobs, especially in the hospitals, are being made bilingual even though the % of French-speakers is very low in those hospitals. This is especially so in places like Ottawa and Cornwall where bilingual French-speaking nurses from Quebec are hired in preference to our locally trained English-speaking nurses. I am sure you must have heard about Dr. Tombler & his complaint about bilingualism becoming a barrier to many Ontario nurses. If you are not, I take the liberty of enclosing a letter from him to the Standard-Freeholder in Cornwall.

5. You must be aware that Mike Harris’ attempt to bring the policy that “Fairness is a two-way street” to help our truck-drivers who are impeded from working in Quebec has been negated by the Liberal government since they took power. Now Quebec truckers and snow-removal contractors are given preference over Ontario truckers and snow-removal contractors in Ottawa. Is this something you are willing to do anything about? To refresh your memory, I will attach a page from the Greater Ottawa Truckers Association publication.

6. Are you also aware that many of our English names on streets, buildings etc. have been changed to French names under the Liberal regime? The Liberal regime is very supportive of the French and ran ads “WHY IS FRENCH-LANGUAGE EDUCATION IN ONTARIO THE BEST CHOICE FOR YOUR CHILD’S FUTURE?” that clearly hint at the inferiority of English-speaking citizens as opposed to bilingual citizens. The Liberal regime is responsible for the amount of money spent promoting French in Ontario – will you follow the same policies if you win the next election?

7. According to the Fraser Institute Report, surely we have more urgent needs that are currently under-funded that we can spend our tax dollars on than this? We have heard that our Health-care service is so severely underfunded that our seniors are going to be denied certain essential services.

Thank you in advance,

42 Responses to "LTE-A Response to “When the Money Runs Out: a wake-up call about the state of Ontario’s economy”"