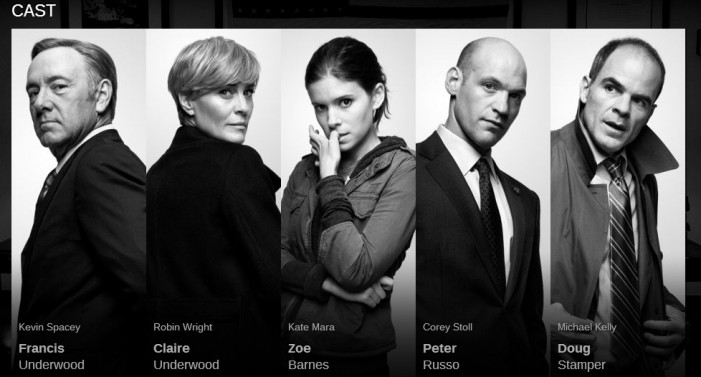 CFN – Netflix has been a very nimble and quirky company.   As film, television, and the internet merge like contagious diseases the former DVD mailing competitor that has survived Block Buster has now unveiled it’s own programming.

Seeing the future Netflix jumped into the streaming of programming relying on feature films, documentaries and late run TV episodes.   HD quality on demand programming for about $8.00 per month.

Who needs cable?     But Netflix facing more competition and higher product prices has now entered into the production realm with its own show, House of Cards.   I’m watching the first episode right now and am very impressed.

House of Cards is nasty.  It’s bitchy.   It’s vicious.     Kevin Spacey with his Midnight in the Garden of Evil Southern lilt and Robin Wright head a cast of Washington DC .  It embraces old media vs new media.   It’s got some hot guys ( a Spacey need) and a cute chick with a push up bra.

Treachery, skullduggery, back stabbing, and all the fun that comes with the blood sports that Politics are.    Add in Spacey breaking the 4th Wall now and again and it’s a recipe for yummy tv.

Something that HBO and other cable channels I’m sure are curious about.    After all, why should consumers here in Canada be forced to pay for content they don’t want to watch?

As a writer I find this new wave of entertainment quite exciting.  More distribution channels equal more content.    More choice for the public equals more work for my brethren and that’s a fine thing! House of Cards was developed by St. Louis native Beau Willimon, with David Fincher, Eric Roth, and Kevin Space amongst the Exec producers.

Do you watch House of Cards?  Whatcha think of the show?  Will this kind of programming bring you to Netflix, or keep you there?