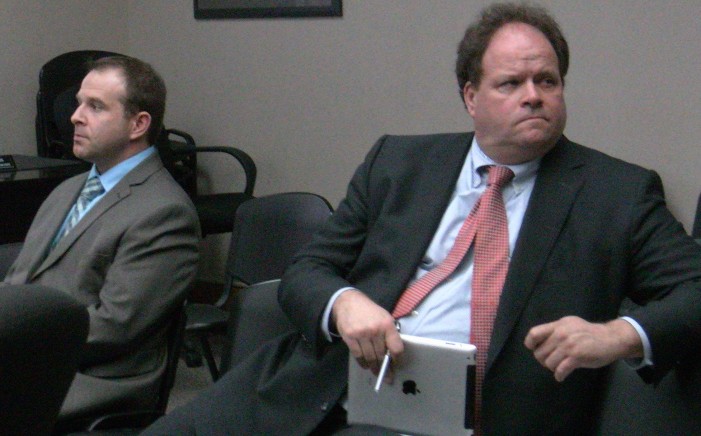 CFN – That mean looking hombre on the right is power lawyer Will McDowell, partner at the law firm that represented Toronto Mayor Rob Ford over his Conflict of Interest charges.  From his firm’s website:

In his wide-ranging practice, Will has appeared as counsel in many important cases focusing on issues of public law and commercial litigation. He is also a leading practitioner of libel and media law, having acted for both plaintiffs and defendants in numerous noteworthy cases. In addition, he has acted as counsel to several Ontario universities.

From 2005 to 2008, Will was Canada’s Associate Deputy Minister of Justice, with responsibility for civil litigation, national security and issues involving federal central agencies. He led a Department of Justice team that addressed a complex series of issues surrounding the Aboriginal Days of Protest in 2006–2007.

Council’s bizarre in camera meeting, one switched from Saturday to Tuesday, still is fuzzy.    The public is being kept in the dark while the city clicks up tabs from the group eating together, which if I’m correct actually counts as a meeting as they closed the door where they were eating at 4 PM, to all these legal people and of course Mayor Kilger, who was scheduled to chair the meeting, disappearing?

City Clerk Helen Finn has refused to answer all questions at this point sending CFN this strange missive:

In response to all your questions with regards to the in-camera meeting of February 19,  and in accordance with the best practices regarding open municipal meetings in Ontario, the minutes of this meeting that will be deposited on February 25, 2013 will reflect such information as required by the best practices. WTH?    The question next up is this powerful Toronto lawyer on the City’s tab or Mayor Kilger or one of Council’s?  Or some mix and match mess?    All parties emailed have refused or not responded to our very simple question.

Contacted today Ms. Bernadette Clement informed CFN that she took the day off from this most important meeting to attend the Kathleen Wynne Queen’s Park event.    Does it sound like Ms Clement wants out of this sinking ship as fast as she can distance herself in this hot new boots she bought?

Ms Clement, a lawyer herself, did not correct or confirm our query when we asked her about missing the Conflict of Interest meeting.

Lawyer Fay Brunning’s two Whistle Blowing cases against the city of Cornwall are most likely the trigger for this odd and yet freaky to watch chain of events.

It’s boggling how many tax dollars are being spent on this as Lawyers such as Mr. McDowell, the gentlemen with him, along with City Legal Beagle David Sherriff-Scott do not come cheaply.

Having these meetings behind closed door with no accountability to the public seems quite wrong and sadly it looks like the Ontario Ombudsman, unlike in Alberta, has no teeth in Ontario over MUSH facilities; IE Municipalities, Universities, whatever S stands for, and Hospitals….

The public really has very little it can do short of a member of the electorate or group of electorate hiring a lawyer similar to what happened with Mr. Ford in Toronto; which maybe, just maybe is why such an esteemed and ferocious lawyer like Will McDowell visited our fair city Tuesday.

Mayor Kilger has not returned phone calls or emails as of press time.  We can confirm that he attended a Counties meeting Tuesday morning, but skipped out on the PAC meeting Tuesday night.

You can check out video of the session before it went in camera and the exchange between Reporter Greg Kielec & Chair Glen G Grant by clicking  HERE.