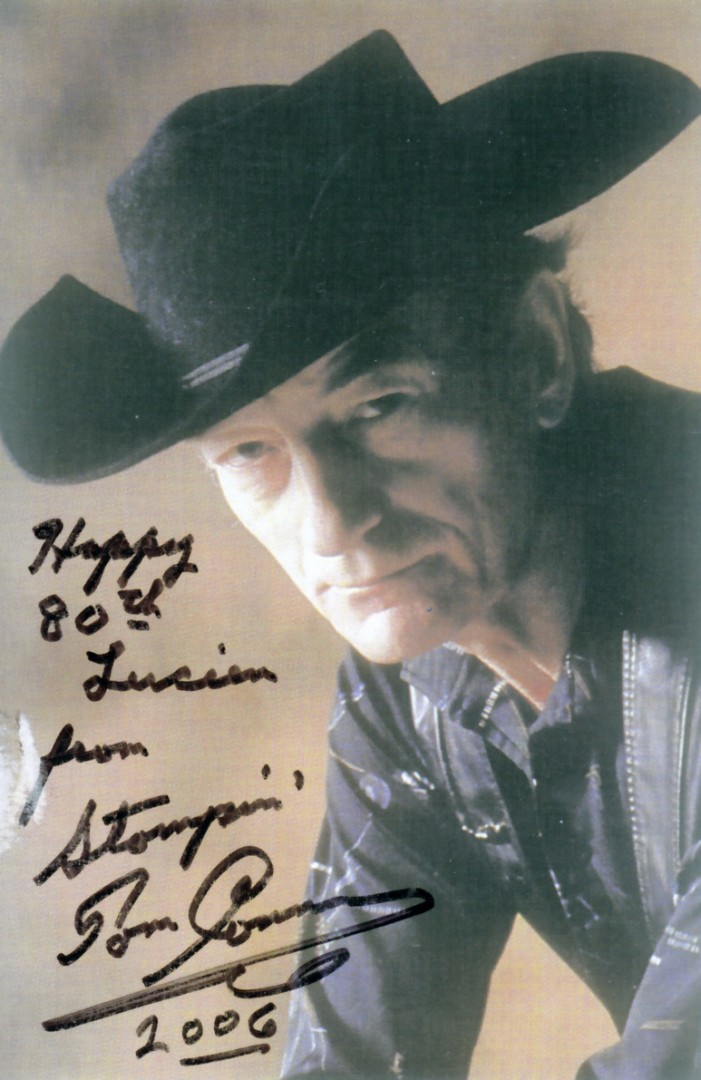 Smokey received this card from Stompin' Tom on his 80th birthday 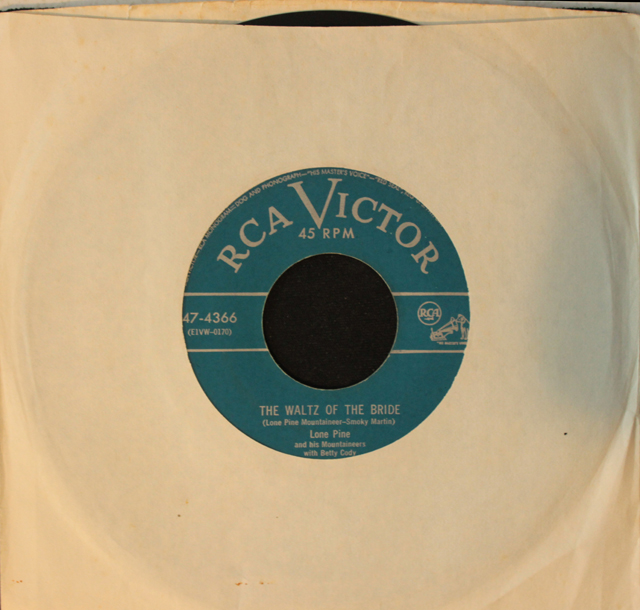 Walt of the Bride 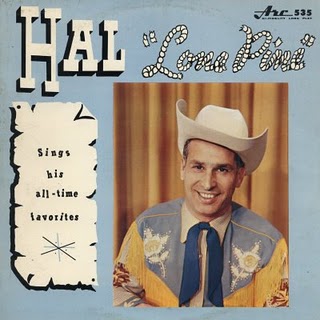 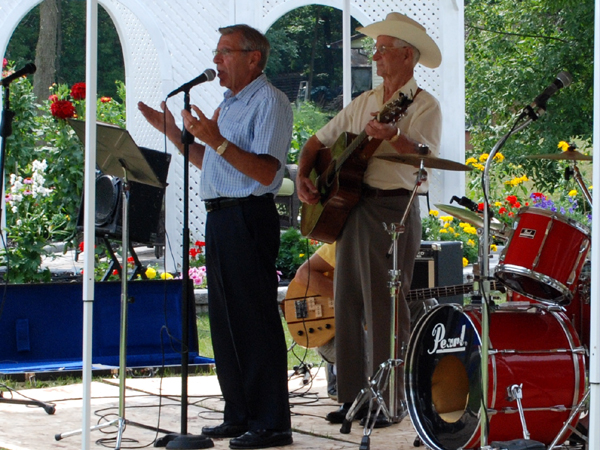 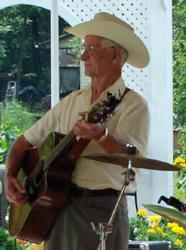 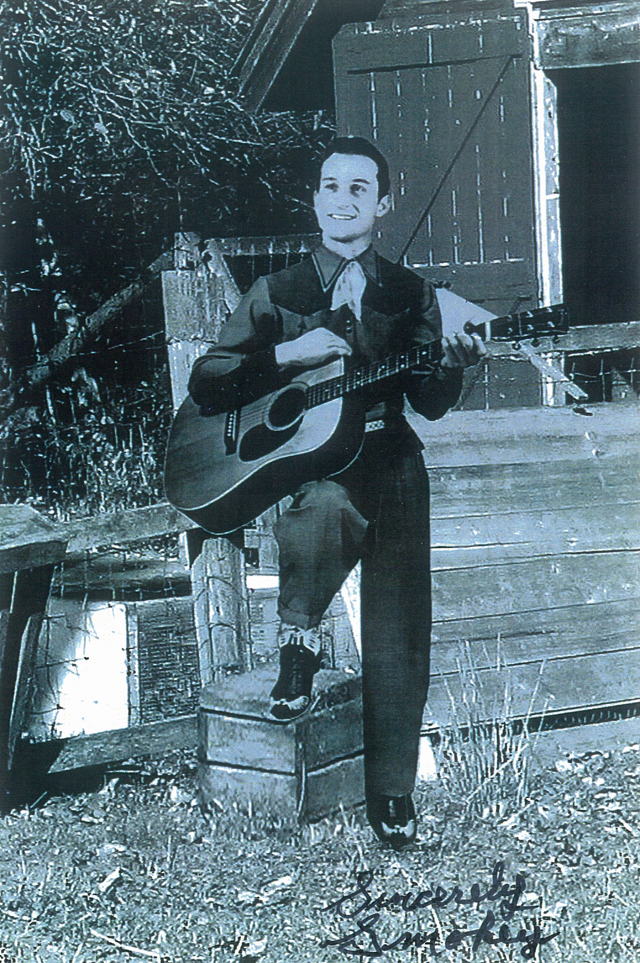 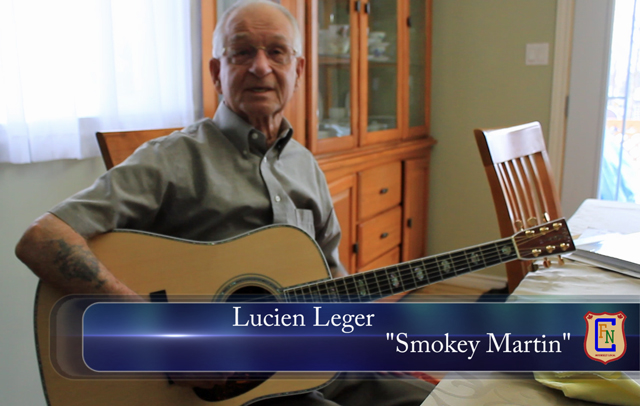 In Cornwall Ontario Smokey Martin still Smokin’ after all these years

CFN – Cornwall born Lucien (Smokey) Leger, officially retired after a 50 year music career, has a claim to fame that connects him to Canada’s one of a kind Stompin’ Tom Connors. The recent passing of Connors solidifies his place in Canadian history as a true patriot and music legend. Connors sang about all things Canadiana, and was a national treasure, whose songs have made him a Canadian icon.

When Leger was just 18 years old, he composed a song titled “Waltz of the Bride” which Connors went on to record in the early 1970s, and included on his Pistol Packin’ Mama LP, released in 1971. He also included the song on the Stompin’ Tom Connors Sings 60 More Old Time Favourites LP in 1976.

It was not until the early seventies that Leger and Connors actually met. Leger knocked on Connors’ dressing room door during a stop at the Water Street Arena while touring with Wilf Carter. Leger remembers the bass player opening the door, and then asking if he could speak with Connors. The bass player invited him in and told Connors there was someone here to see him. Leger told Connors he wanted to thank him for recently recording his song, “Waltz of the Bride.” Connors offered Leger a seat and the two chatted for awhile over a beer. Connors explained that as a child, he used to go watch Leger perform with the Hal Lone Pine group in Prince Edward Island. At the time, Connors was living in Skinners Pond, and Leger’s group would do a live, weekly radio show for CJRW in nearby Summerside, PEI. Leger remembers Connors as “a good songwriter, a good businessman, and a heck of a nice guy.” In fact, he claims that it was no secret that Connors was known to cover the mortgage payments of some of his fishermen friends when times got tough. “He was a very good-hearted man,” recalls Leger.

Leger received a card from Connors a few years ago for his 80th birthday, which he keeps in his archive of personal musical memorabilia.

In his younger days, Leger sang and/or played with Will Gaylord, Syd Plumador, Garfield Baker and his uncle, Jerry Leger. He was one of the more than one hundred musicians and singers who played part or full time with the Texas Ramblers which changed personnel many times during the war years. The Texas Ramblers were the first country band to electrify their sound, promoting themselves as the band you can hear better with electronic equipment. Other groups that he graced with his musical ability include the Golden Bar Rangers and the the Roving Cowboys. Back in the day, listeners of radio stations CFCF in Montreal and CKSF here in Cornwall, may well recall listening to Leger jam on air with various bands.

Later he teamed up with husband and wife team Harold Breau and Betty Cody and their Hal Lone Pine Show, which was a very popular group that performed on television and made recordings. Today the couple is more likely to be recognized as the parents of guitarist Lenny Breau.

After returning to Cornwall in the early 1950s, Leger went on to release a solo record, titled Love at First Sight, under the RCA Victor label.

As a favour to Stormont, Dundas and South Glengarry M.P. Guy Lauzon, for the past nine years, Smokey, with other family members at his side, has entertained those who’ve attended Lauzon’s annual constituency bbq at Lauzon’s residence just up the road from St. Andrew’s Church.

Smokey boasts of having 13 sibblings: Robert and Gerald Leger, Lucille Lauzon, Claudette Kaddie, Madeleine Bell, Therese Forget, Yvette Longtin, Georgette Proulx, Rita Emmons, Claire Cuerrier and Noella Bedard; they are pre-deceased by his younger brother, Maurice and sister, Laurette Lavigne. Their parents were the late Wilfrid Leger and the late Irene Dumont. Smokey and his wife Jean raised six children of their own, many of whom are well known in this area for their musical prowess.

Many thanks to Smokey’s grandson, Ed, and to Bill Lasalle for providing some great background material.

While reminiscing over an old photo album, I talked Smokey into playing his ‘Waltz of the Bride’ hit for the enjoyment of CFN viewers.