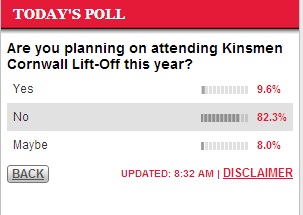 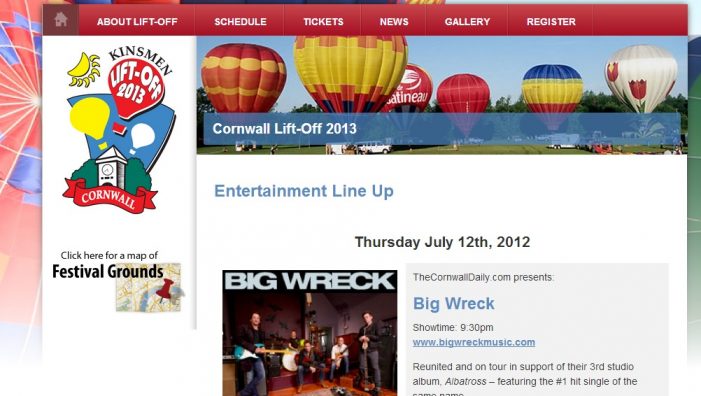 Cornwall have been asking since The Kinsmen sponsored Lift Off festival’s 2010 4 day event drew 55,000 people according to former founder Chris Savard.

In 2011 the festival had to borrow $30,000 from the City of Cornwall in a most unprofessional incident that didn’t even require the group to open their books or put up security.   The loan was paid back, but the public still was asking where the money went from 2010?

In 2012 attendance was down to less than 25,000 people; but even at the minimum ticket price that would put $625,000 into the coffers of the event and then you have to add in sponsorship and fundraising.

CFN spoke with several promoters and forensic accountants.  This scribbler has also promoted over 200 events in my past career so I’m also no stranger to costs of an event.

This year’s version of Lift Off is also off to a rocky start.   The headliner’s have not resonated well with the public.

The Cornwall Daily ran a poll that started before the bands were announced and as of 9:00 AM this morning were still running. As you can see those saying that they wouldn’t attend nearly doubled over the weekend with the no number nearly hitting 90% Saturday night.

Again, with only 20,000 people attending that would be an expected $500K in ticket dollars.

The fee quotes of the headliners playing amounts to about $75,000.   Add in another $75,000 for lights and sound and you’re up to $150,000 – let’s say the Lift Off volunteers are total nobs and can’t negotiate a good deal even if you double those costs which isn’t really likely you’re up to $300K

Lift Off gets numerous breaks for the park – staff are volunteers; in other words there are not huge other costs.  If they added up to another $25,000 it’d be surprising; but again, let’s double that amount and you still get a total of about $350,000, well less than the low ball expectations of $500K from ticket revenue.

Now add in sponsorship and other revenues to the pie and again the question becomes louder.

Surely with these kind of numbers the Lift Off team could up the ante and bring in some of the more desirous talent on tour in the region this year?

While they did make a great choice of adding more local talent (and finally paying them!)  they also chose to not add in secondary bands as they have in years past.

While a private promoter is free to do what they wish Lift Off receives support from taxpayers and the City.   Cornwall Kinsmen Lift Off is supposed to be the signature event for Cornwall.

The Lift Team has changed up its board of directors, again, (former chairs Savard, Rick Shaver, and Judi Auger have all left since 2010) but many are asking if it’s the same old same old?  Is it being connected to the Kinsmen?  Sut surely the community deserves an answer to where the money is going, and as a non-profit surely every penny should be spent on putting on the best show possible?

CFN was proud to be a part of the best Lift Off ever, back in 2010.   We’d love to see this event shine, but it needs to be professionally run by professional people.    The “All Volunteer” excuse just doesn’t cut it when it comes to large amounts of money.   Surely the seeds of success lie in Lift Off; but to do that it should be about all of the community and being totally inclusive.  Adding board members who let their personal and petty biases decide how to run things will never lead to success.

Story note.  Co-Chair Jason Jesmer was contacted.  He refused to update 2013 ticket prices (Many of the 2012 ticket prices doubled)

With Rib Fest and other events in the region competing for tourist dollars any event has to reach the most people possible and that takes a concentrated all year effort.  Updating the event website helps to as Lift Off, even though having their announcement party have yet to do so; nor does their website as of print time even mention their sponsors for 2013?

Lift Off is something that Cornwall should and could be proud of.  The support of hundreds of volunteers across the community is amazing.   But surely those volunteers and taxpayers deserve transparency, accountability, and the best show that it can be?

Will you be buying tickets to Lift Off in 2013?   You can vote in our poll and post your comments below.

The Cornwall Daily has taken down their poll question regarding Lift Off.  Lift Off have updated their website, but either they or crack provider Webtech haven’t mastered the art of embedding You Tube clips yet.  They have not updated their sponsor list.