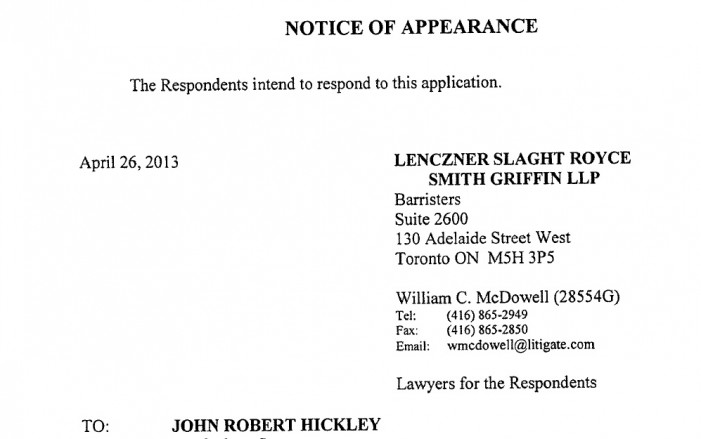 CFN – What a purposely confusing mess the Kilger team is running and bleeding City coffers as the public starts to cry out and demand accountability over Fitzygate. The problem is once you catch someone telling Porkies you never know where it ends.   The above screen cap is from a public document that states Super Lawyer Will McDowell is representing all Respondents in Whistleblower Rob Hickley’s upcoming legal case.

That of course would be gross conflict and mean that several councilors and CAO Norm Levac were straight out lying to the public when they stated that the City would not be paying the Mayor’s legal bills.

Mr. Levac has not responded to emails or phone calls since Friday; but Mr. McDowell himself emailed in the following when asked if the image above would suggest that he was representing the mayor as well as the City?

It would, but we will file an amended Notice of Appearance, as our only authority is to appear for the City. My office files these as a matter of course, and I did not notice that we had appeared for the Mayor as well.

Now comes an even bigger shocker that the Whistleblowers clearly sent council documents stating that they waived their privacy rights during the Judith Allen investigation so that other city employees would know that the investigation was taking place and that they could participate, thus muzzling possible information and other witnesses to step forward.

Both whistleblowers in their July 2012 letters to council offered to waive confidentiality/anonymity of their identity to make sure the employees of the City were aware of the whistleblower complaint processes underway.  Those letters were delivered personally to each member of Council.  Why did Council not agree?  Perhaps because to tell the employees about the investigation would have meant that the public would have likely found out and/or that employees with more evidence to disclose about Fitzpatrick, were not advised anyone was investigating and/or to whom to provide it, and/or how to seek protection.   Because Council did not communicate to the employees there was an investigation process underway, and the original issues dealt with conviction for illegal retaliation being investigated (who was responsible for that illegal retaliation) plus the Whistleblower complaints, then in the workplace, employees would have no confidence they would be protected by Council.

The city and council are also not stating if other employees were ever threatened with discipline in the process of the whistleblower investigation for allegedly being “in serious breach of confidentiality.

The city is also refusing to state how much was spent on the Judith Allen investigation or whether for example witnesses testified under oath?

The City of Cornwall is also refusing to state how much it has spent on legal costs, settlements, and amounts such as monies for executive leave.  Many in Cornwall as asking how much the former CAO was given to walk away from the mess he created which has cost the city by some estimates near $3,000,000 while cutting subsidized housing units!

At the end of the day the biggest question is why still is this council in its silence protecting a mayor who not only is clearly in conflict of interest, but most likely is practicing the same form of Gangsterism that Laval Mayor Gilles Vaillancourt has been nailed on?

Interesting that the Mayor thanked Mr. Fournier for trying to assist Council in understanding their mistake (in failing to balance at all the rights of the public to know and the right to confidentiality of the accused/complainants).  However, Council did not thank the two people who brought forward these valid public legal issues in the first place for the public rights to be determined by Fournier and corrected with City Council.  Council did not apologize to the public for failing to give any weight to the rights of the public.

Council has not offered, and has in fact denied, paying for the legal costs of Hickley and Shay for having to teach Council about the rights of the public, through complaints to Fournier.

Kilger Council Stayed Mum After Shay Gave Permission to Reveal Whistleblowing – Why? And is McDowell Repping Mayor? added by admin on May 13, 2013
View all posts by admin →

7 Responses to "Kilger Council Stayed Mum After Shay Gave Permission to Reveal Whistleblowing – Why? And is McDowell Repping Mayor?"