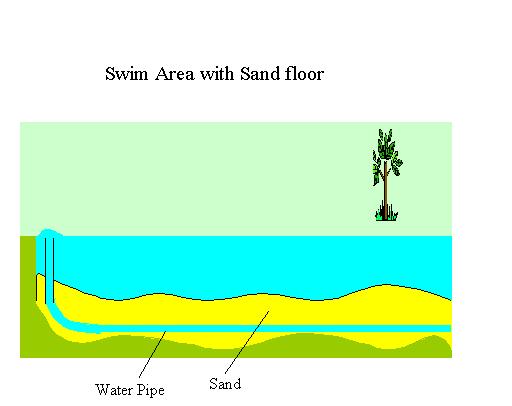 I was doing my thrice weekly walk with a friend. We passed by the inlet just below the RCAFA Wing. Our approach was from the boat launching ramp and kids were enjoying a swim in the inlet, from the south side.

When I and friends presented a beach idea to the Water front Committee (3rd time done) we focused on the North edge of the inlet. Today I could envision the opposite or southern edge of the inlet with a sandy beach approach from the bike path on the peninsula to the water.

The kids loved it. They all ran down the narrow docking ramps and jumped right in. It was beautiful. What a loss to the city of Cornwall that so many have their heads buried somewhere deep that they can not see the advantages of having our own beach in the middle of Lamoureux Park.

This truly is a perfect spot for it.

A gunnite(cement) bottom layer would cover up the concerns of any deep pollutants.  Also, this inlet was dredge their in 1970.  It was not part of the original flow but rather a back wash pool…far less to no pollutants here and a gunnite would secure the bottom anyway.

Pulling the earth back to bevel the south approach, layer it with sands. Picnic tables for family time and portables for wash room breaks and changing. IT CAN AN SHOULD BE DONE.

Is it selfishness of the RCAFA Wing and other city fathers wanting this pristine pleasure for themselves. That continues to destroy any attempts to reclaim this area for the children?

To date we have had no proof of sediment issues, which, if a concern to any degree, can, as often done around the world, be covered by the base cementing approach.

The geese are here for 6-8 weeks until their goslings can fly and are mostly outside of this pond area.  It is my hope that this project will be revisited with more fervor and desire on behalf of a community who needs it.  I do not believe what we are told up to this point.  I do believe there may be ulterior motives withholding this approach.

If it is a project that we want the money will come.  Grants and donations are very possible as they are for many other ‘community’ driven project.