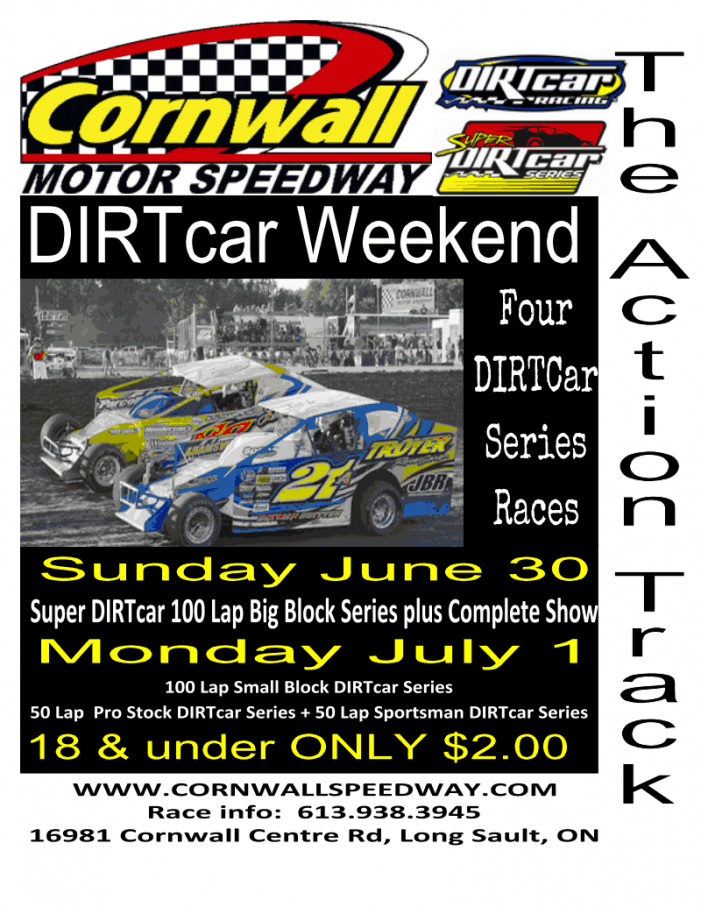 CFN – Cornwall Motor Speedway was host of the first of two night of a DIRTcar doubleheader as the Super DIRTcar Big Block Series was in town with a record setting 58 modifieds in attendance for the Evans Bus Lines 100 along with a full race program for the other regular divisions.

Bobby Varin and Matt Billings were on the first line of the Evans Bus Lines Super DIRT Big-Block 100-lap Series event. Varin to the lead with Billings and Billy Dunn in third, the Watertown, NY driver quickly jumped to second with 3 laps in. Caution came out on lap 5 as several cars slowed in the backstretch. Dunn jumped to the lead on the restart on lap 9 as Luke Whitteker was now in third spot. Dunn got into heavy traffic as we hit lap 18, he had built a sizeable lead over Varin. Jimmy Phelps cracked the top 5 after passing Billings on lap 30. Dunn had a full stretch lead with 40 laps in the books with Varin still holding on second. Carey Terrance was on the move passing Phelps and David Hebert and now sits in fourth as the feature got at halfway point. Dunn in the lead as Whitteker jumped to second with Terrance now third with 46 laps to go. Varin slowed on the back shoot and caution was out on lap 55. Dunn still leads the race with Hebert now in second; the Frenchman took the lead as Dunn seems to have issues slipping to third with Terrance in his bumper with less than 30 laps to go, Dunn brought the caution on that same lap. Hebert in the lead as the top 3 remained unchanged on the restart. Terrance used the top line to get by Whitteker on lap 77. As the leaders got into traffic, two cars tangled in turn 2 with only 13 laps to go. Hebert still in front with Terrance really strong on the outside and grabbed the lead on lap 88. Terrance pulled away and went on to win his first Super DIRTcar Big Block Feature over Hebert, Whitteker, Sheppard and Phelps completed the top 5.

In the 20-lap Tracy Wheeler Storm Realty Sportsman Feature, Louie Jackson jr led the field to the green as he was the leader for the first 7 laps, making a few nifty moves; Joey Ladouceur jumped into second and passed Jackson on lap 7. He led the last portion of the feature and resisted to charges from Jackson to capture his first Sportsman feature.

Marc Lalonde led the way in the 20-lap Alexandria Home Hardware Pro-Stock Feature; Lalonde was in front as he got passed by Bruno Cyr. The Quebec driver led the major portion of the feature and got his first career win in Cornwall as Ghislain Valade finished second and Rob Yetman in third.

The Evans Bus Lines 15-lap Semi-Pro feature was the last race of the evening as Derek Cryderman was the leader on the first green. Cryderman had Kevin Fetterly jr on his backbumper, he held off several charges to win his first feature of the year over Fetterly and Bruno Richard.

The Baxtrom YIG 12-lap Mini-Stock was the first event of the evening with 21 cars starting taking the initial green lap. Justin Desrosiers was the early leader but got passed by Mike Gaucher in the early portion. Gaucher managed to survive several cautions during the halfway point and kept the lead for the remainder of the feature to capture his first event of the season in front of Joel Pilon and Justin Desrosiers.

The action continues tomorrow as the DIRTcar tripleheader will be presented with the presence of the DIRTcar 358-Modified Series in conjunction with the first race of the Canadian Nationals Series, the DIRTcar Sportsman Series and the DIRTcar Pro-Stock Series mixed with the Mohawk Race Parts Series. A total of 200 feature laps will be run.