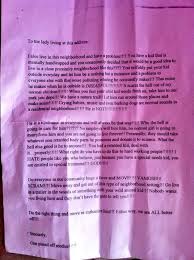 CFN –   Please be forewarned to read and think before reacting to this piece.  It’s not defending the author of the letter above  nor is it in any way condoning some of the horrible sentiments in the letter above that has gone viral.

We live in a society that has less and less accountability, and less penalties for crossing the lines of courtesy and respect for each other; our neighbors, and to some degree ourselves.   Our society has devolved.   Some may blame degenerated families and babies raising babies.  Some might point a figure at a Zeitgeist of entitlement.   My child is allergic to peanuts so the entire school can’t eat peanut butter sandwiches any longer type thinking….

People talk about bullying; but do we teach our children how to deal with bullying?  Do we as a species want to hold up those that simply can’t move to the front of the pack as pack leaders?   Is it not human for dominance to be asserted and isn’t that process a life lesson that young people need to survive as adults and pass down to their children?

Common courtesies such as holding a door for someone; giving up a seat; letting someone in line at the grocery store that only has an item or two seem passe.

Children in restaurants or public places; with conditions or not screaming and fit throwing with no real attempt of control?  Pets dropping or being destructive or noisy going unchecked.   (when they’re not uncaringly left in cars to die of heat)

Whistleblowers like Edward Snowden being given 35 year sentences while shooting an unarmed teenager equals zero are not rarities in our society.

Some of the biggest crimes have never nor will ever even be publicly shared.

We live in a world of monsters.   And sometimes people react.  They blow up.   We see this on the news almost regularly.  We see children mowed down in schools.  We see children killed by Chemical weapons in places like Syria.

There seems to be no forethought about retribution for actions or deeds?

When I read that pink letter above as offensive as it is I hear a voice of someone that’s horribly frustrated and probably near their tipping point.

How horrible a strain it must be for the parent of that child.  24/7 care with probably nowhere near the support they need.    20-30 years ago children like that might be in residential facilities.   While out of the public’s sight for the most part it was decided that it would be better to integrate patients into society.   There were studies to prove it was the right move, but what happened here in Ontario and in most places is that the supports were not really put in place.   A lot of people were lost and fell through the cracks.  Have you seen movies or tv shows where ex-cons commit crimes right away because they felt safer in prison?

There is a whole industry given to the care of people with developmental handicaps.   They’re usually strained and underfunded.

People with mental illnesses are usually just drugged up instead of really treated.   Sometimes a patient will not take their meds or sometimes they just have not been diagnosed or treated properly and they become Sammy Yatim; or they end up suffering and causing suffering.   Many times they end up in jail.

Or in suicide that then is covered up.

You see I’m a grumpy old man.     As editor of a newspaper I see and hear things which I can’t even print for a number of reasons.   I see the inhumanity that exists within humanity.

And it’s not getting better.  It’s corrupt.  It’s broken; and frankly if people are not aware how can they fix it?   How can you hold someone accountable if they  don’t know what’s been done?

Even in our fair city of Cornwall we have two whistleblowing cases.   We have elected officials brutally beating down opposition and spending millions of tax dollars to cover up and defend their positions which the public barely know much about.  We have the person who committed elder abuse in a seniors residence still working while the people that reported him have suffered immensely.   Does that make sense?

I myself was the victim of abuse by elected officials using police force to manhandle a situation.  While that is now being dealt with what’s most alarming is that certain agencies that claim to be there to protect our rights or raise millions fighting for rights of other people hide from this issue just like so many people hide from bigger issues.

At the end of the day it all starts with personal courtesy and personal accountability.   And that’s something that’s hard to change.

Have you ever stopped someone in a grocery checkout line who clearly had double or triple the amount of items in an express line?   Horrified looks from the cashier and usually some guff from the goofball who clearly doesn’t care that others may need to get through a line quickly.

Have you ever blown the whistle on something?   Usually the messenger is treated horribly.  Today our MPP even stated that health care agencies in Ontario are afraid to voice concerns about matters for fear of losing their funding.   Can you even envision how sinister and wrong that truly is?

If you’re still reading at this point I probably should apologize.  I know I’m venting to an uncaring world.    I know that more people that read this are the type of people that don’t care about being courteous to their neighbors or being respectful to each other.

Isn’t our world such a total mess?

Does Courtesy Exist in Our World Anymore? I dig into that Pink Autistic Child Rant Letter by Jamie Gilcig added by admin on August 22, 2013
View all posts by admin →

8 Responses to "Does Courtesy Exist in Our World Anymore? I dig into that Pink Autistic Child Rant Letter by Jamie Gilcig"