River Kings Win 1 Lose 1 on Weekend – Did you get your tix for Trois Riviere for Saturday yet? 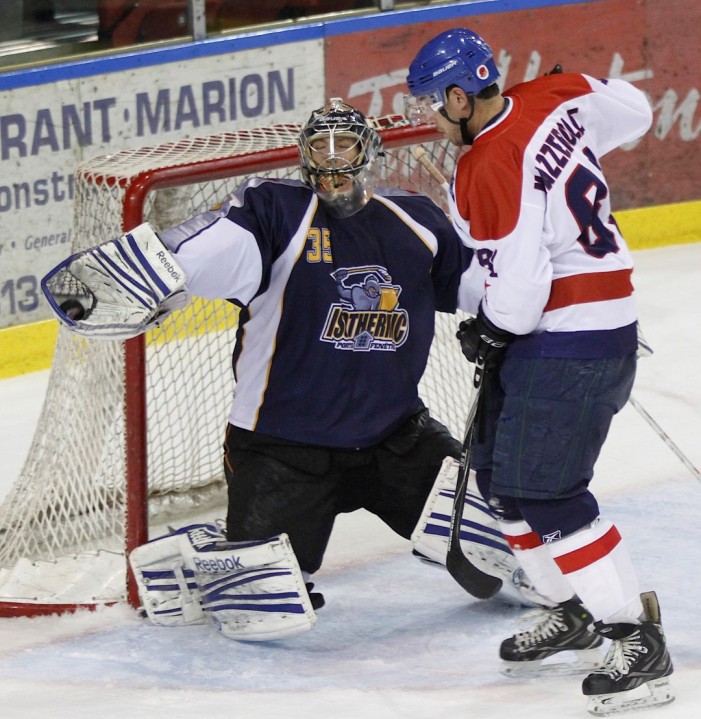 Cornwall Ontario – The River Kings couldn’t recover from a slow start, en route to a 5-2 loss to the Thetford-Mines Isothermic on Sunday afternoon at the Civic Complex. Cornwall spotted the Isothermic a 3-0 lead.

Early in the first period, just as a Thetford-Mines powerplay expired, André Sandrzyk pounced on a rebound to beat Loic Lacasse and open the scoring at 3:33.

Then, Michel Ouellet converted on a nice give-and-go with Maxime Villemaire at 13:06 to give the Isothermic a two-goal lead.

Thetford-Mines outshot Cornwall 15-8 in a one-sided first period and the second didn’t start off any better for the River Kings. Ouellet scored his second of the afternoon on a 5-on-3 powerplay at 1:43.

Pierre-Luc Faubert sparked the crowd of 1,521 early in the third period. With the River Kings on the powerplay, Faubert beat Jean-Philippe Levasseur up high at 2:01. Then, Lacasse took advantage of a bad Isothermic line change and made a long heads-up pass to Alex Bourret, who fired a wrist-shot past Levassseur at 6:39 of the third.

But Pierre-Luc Sleigher beat Lacasse with a nice back-hand upstairs for an insurance marker with 4:56 to play. Then, Pierre-Luc O’Brien iced it for the Isothermic.

On Friday night in Sorel-Tracy, Cornwall escaped with a wild 5-3 victory.

Bobby Mazerolle’s tie-breaking marker at 6:04 of the third period proved to be the game winner. Alex Bourret’s empty-netter with 38 seconds to play sealed it for the River Kings, who also got goals from Nicolas Corbeil, with two, and Pierre-Luc Faubert.

The game was a feisty one to say the least. It began with an entertaining heavyweight tilt between Cornwall’s Francis Lessard and Sorel’s Jon Mirasty. The evening ended with a brawl that was sparked by a frustrated Sorel team, which lost for the second straight game against Cornwall.

River Kings Win 1 Lose 1 on Weekend – Did you get your tix for Trois Riviere for Saturday yet? added by admin on November 11, 2013
View all posts by admin →