Did you buy your Tickets for Saturday River Kings Game in Cornwall Ontario Yet? Military Brass Brand for Anthem! 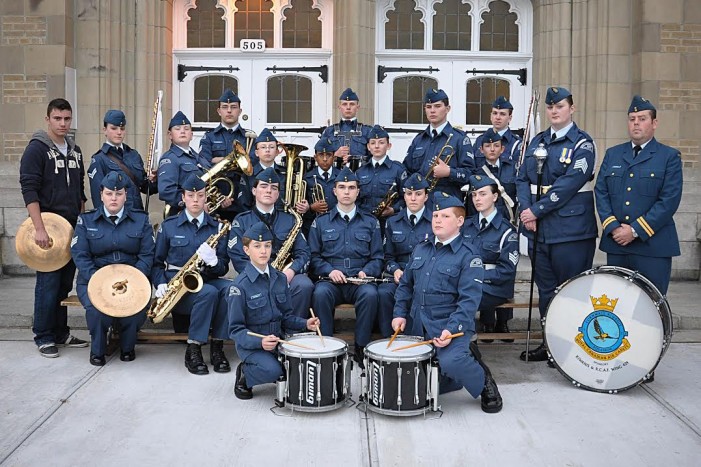 Cornwall Ontario – Saturday night promises to be a special evening at the Civic Complex when the River Kings host Riviere-du-Loup in LNAH action.

Sparky will be in attendance, along with members of the Cornwall Professional Fire Fighter’s Association, for the Toy Drive Teddy Bear Toss.

As well, the 325 Cornwall Kiwanis Royal Canadian Air Cadets Squadron will have their Military Brass and Reed Marching band on hand to perform the National Anthem as well as entertainment during intermissions.

The band is comprised of local youth, ages 12-18, who perform for the community. Recent accolades for the band include top band in Eastern Ontario and second place in Ontario. The band is under the direction of Capt. Sandy McDonald, the squadron’s Commanding Officer and Band Officer. The band is sponsored by the Cornwall Kiwanis Club and Royal Canadian Air Force Association Wing 424.

And of course, fans are asked to bring a new or gently used Teddy Bear to the game. When the River Kings score their first goal of the contest, the bears will be tossed onto the ice. They will then be collected for donation.

Did you buy your Tickets for Saturday River Kings Game in Cornwall Ontario Yet? Military Brass Brand for Anthem! added by admin on December 20, 2013
View all posts by admin →

One Response to "Did you buy your Tickets for Saturday River Kings Game in Cornwall Ontario Yet? Military Brass Brand for Anthem!"