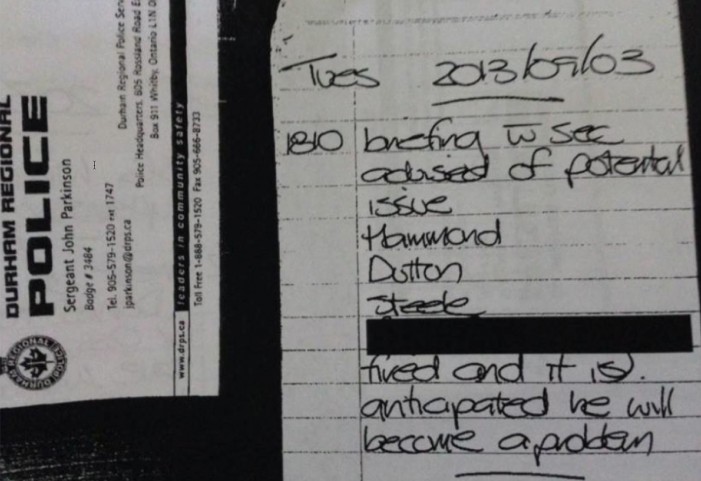 CFN – On September 3, 2013 prior to a City of Oshawa Council meeting, City security staff met with members of the Durham Regional Police Service and provided names of four citizens to these undercover officers sighting safety concerns. (See attached)

During the course of the council meeting the Mayor, John Henry directed city security to remove two of these individuals for clapping, and even though they offered to leave on their own, they were assaulted by city security. When they resisted the assault the police jumped in and arrested them for the charges of assault and fail to leave property. These charges have since been withdrawn by the Crown largely on the evidence provided by a video (LINK ) taken as the melee developed.

The city security guards have since been charged with assault. The other video that is referenced in my letter relating to poor resolution from city cameras is ( LINK ).

In my humble opinion, someone within the city, staff or council wanted to create a incident that would distract the citizens from speaking to matters that were on the agenda and to what that they were about to put forward. By targeting certain individuals and antagonizing them into a confrontation they managed to immediately draw the attention away from the AG 13-09 and the farce of an investigation from Mr. Rush-D-Eye. Look at the series of events after Mayor Henry asked Dan Hammond to leave and the ensuing physical altercation, a recess was called for and seconded and it was then that Bill Steele was identified by Mayor Henry and asked to leave, odd that someone would be ejected during a recess. The smug smile on Councilor Diamonds face during the entire event spoke volumes. The galleries reaction and attention immediately went from the AG and his report, that ultimately never went to the floor for discussion or debate and Mr. Rush-D-Eye’s incomplete report was brought forward and accepted by the 8. Lets not forget that the procedure that night was changed to have delegations prior to MR. Rush-D-Eyes report. It was all smoke and mirrors the only difference this time is the camera was running and caught the whole act and the audience is now asking for their money back.

Also find attached is my letter to the Mayor and Council asking to begin a full and independent police investigation, fail that, I will be making the request to the Solicitor General of the Province of Ontario to investigate, as I see this as intimidation of citizens and oppression of democracy, as well as a lack of transparency and accountability. This matter is included on the City’s Council agenda for Monday January 27, 2014 meeting.

I am writing you to ask, that, in light of recent developments regarding the events that took place in Council Chambers on the evening September 3, 2013 where City Security accosted several citizens and then undercover police from the Durham Regional Police Service subsequently arrested two citizens for assault. The Crown has since withdrawn those charges and the two City Security Guards that were involved in the altercation have now in fact been charged with assault, how is the City of Oshawa planning to proceed.

– I would request that you, on behalf of yourself and members of Council issue an apology to Dan Hammond and Bill Steele for the abuses that they suffered at the hands of City Security and for your statement that you were happy that the police were in attendance also be retracted.

– That a formal request be forwarded to the Ontario Provincial Police by Council to conduct a through independent investigation into the events that transpired on the evening of September 3, 2013 including but not limited to conduct and/or involvement of any City Councillor, including yourself and any City Staff as it is clear through evidence that Police were requested to attend prior to the Council meeting and then conducted a briefing with Security. Furthermore, that police incident report does not reflect the activities reflected in videos captured during that evening’s event.

-I ask that other than a request for an investigation, that Council and/or staff co-operate fully and make no attempt to limit the scope of the investigation including but not limited to, who made the initial request to DRPS, who on Council and staff was privy to their attendance in advance of the Council meeting, if in fact specific people were targeted, who provided those names to DRPS and City Security and who was directing Security to Bill Steele during the Council meeting as documented by the video captured that evening.

-I would like to ask why video from city cameras only show fuzzy images of the activities of that night, considering the recent expense of renovating City Hall Council Chambers and that current video equipment was installed, we shouldn’t experience such issues as evidenced by video captured that night? You can only make out shapes and not identify specific people, was this an oversight or intentional, so these videos could not be collected as evidence of the actions of Council, Staff or security.

-The results of this investigation should be made public, furthermore, that based on the outcome of that investigation if any malfeasance was conducted by Members of Council or Staff that warrants charges, that those charges be laid.

– That Council adopt a policy that if and when Council or staff feel that Police Service is needed to bolster Security that only Uniformed Officers be asked to attend.

– That you, your Worship, declare yourself in a conflict of interest and step away from your position on the Police Services Board.

– That this letter be presented in it’s entirety to Council and not be subject to censorship by any member of Council or staff. Mayor John Henry of Oshawa responded to our email query and provided the following.

I am not able to comment on your email as there is ongoing legal issues.

The board may give orders and directions to the chief of police, but not to other members of the police force, and no individual member of the board shall give orders

or directions to any member of the police force.

It should be interesting to see how this plays out; especially as 2014 is an election year.