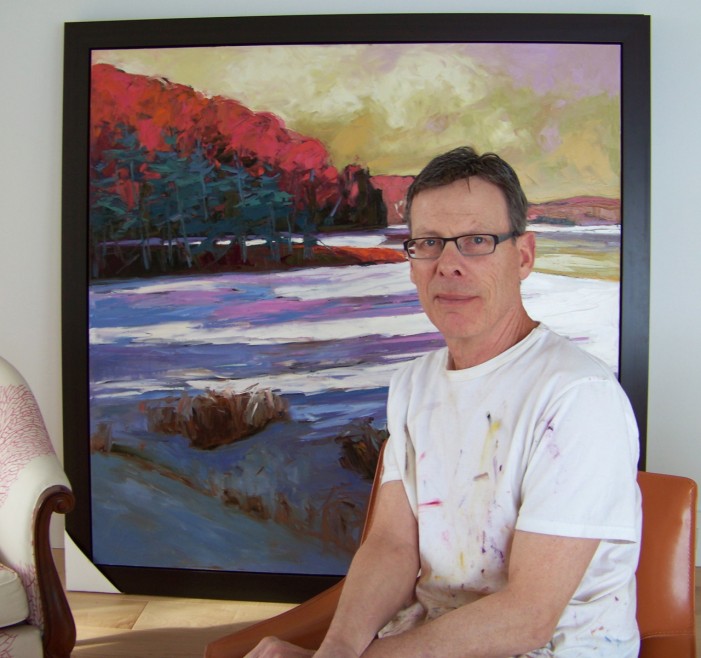 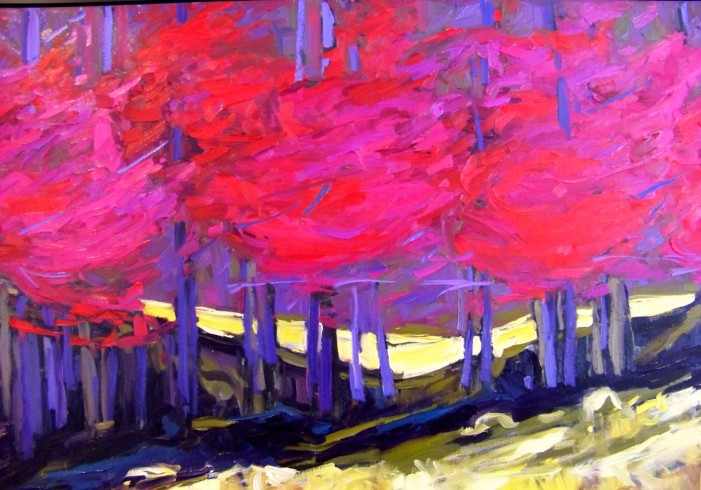 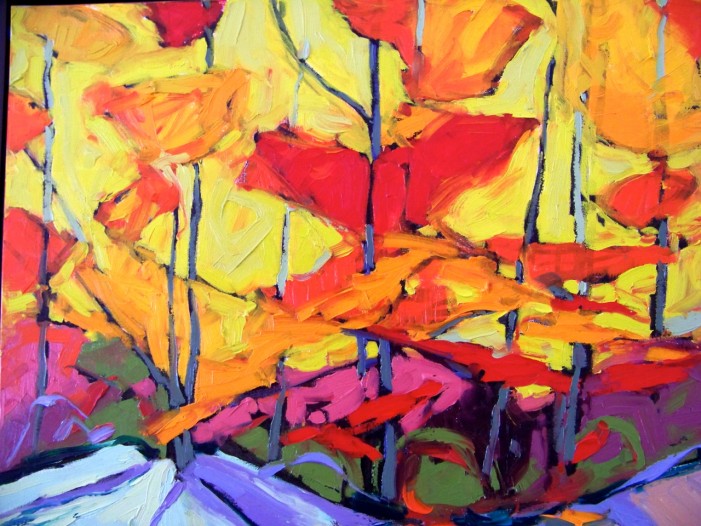 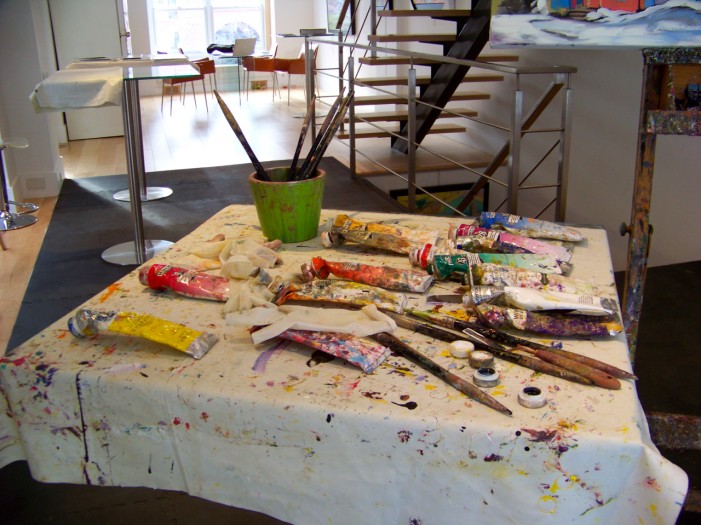 To me, Gordon Harrison’s works are like love songs to the Canadian landscape.   And I learn that art lovers – from Iceland to South Africa, Argentina and Australia – are listening.

In fact one, Julie Jacobson – wife of the former U.S. ambassador to Canada – made headlines a few years ago when she bent the rules and brought “Canadian” paintings into the official Ottawa residence, including one of Gordon’s landscapes.

“When I walked into the Jacobson’s home and saw my work hanging alongside an Emily Carr it blew my mind.”

Today, Gordon’s birch trees hang in the private collection at the Jacobson’s home in Chicago. Strangely enough, Canadian landscape paintings weren’t always accepted, admired or understood.  Even by Canadians themselves.  Gordon and I don’t discuss this fact but I’ve done some homework.

As recently as the late 1920s – after the National Gallery of Canada hung Arthur Lismer’s September Gale – public protests left some of the most gale-force quotes on the pages of history.  Among them that Lismer’s painting was:  “The greatest abortion of a work of art ever seen,” and, that public funds should never be used for: “Hideous, freakish and unnatural paintings by artistic perverts.”

Lismer, of course, was “one” of the famed Group of Seven.

I hadn’t meant to go off on a tangent about the Group.   It’s just that Gordon Harrison is often referred to, in media, as the eighth member.  And when I mention it to him, he responds in his soft-spoken and unassuming way that his brush strokes are really quite different.

There is a “softness” to Gordon’s visible brushstrokes.  Something you can only really appreciate standing up close to his work, and something I’ve had the opportunity to do twice. I first met Gordon about three years ago when I gave myself a birthday present, a one-on-one coaching session with him at his Ottawa studio.  It was a beautiful sunlit day in spring, and each of us worked on our own canvas, chatting away and employing Gordon’s “approach.”  And by the time the shadows were growing longer and we stood back to compare paintings, Gordon’s was arrestingly beautiful while mine was a bit handcuffed by hesitancy and inexperience.

So I’m back in his studio on a snowy day asking him to tell me about other students who have enjoyed either a one-on-one session or a week-long retreat at his home and studio in Lac-des-Iles, Quebec. Never one to call too much attention himself, Gordon thinks about my question. I push a bit.  And he haltingly tells me about a woman who developed breast cancer not long after her studio session.

“When she went into hospice, her sister called and left a voice mail saying there were only two things she took with her.  The painting she made [from our session] and my book. But by the time I called to speak to her, later that day, she had already passed away.”

Before I leave the studio, Gordon and I climb the stairs and head for the third-story window to gaze out at the vista.  Among other things, he points out the Peace Tower, the magnificent conifers that line the Governor General’s property, as well as the many varieties of maples that line the street directly below us.

Shortly afterwards, as I pull away from the studio and navigate the snow that invades and is piled high along the streets, I think about Gordon’s mother who he lost not too long ago.  How intelligent and caring she was to offer her little boy – who had some speech problems caused by being tongue-tied – the tools to make art, the tools that helped him communicate.

Maybe Gordon’s artworks are much love songs to his mother as they are to his beloved Canadian landscape.

For anyone wishing to attend a one-on-one session or art retreat with Gordon, you can get more information at:  http://gordonharrisongallery.com