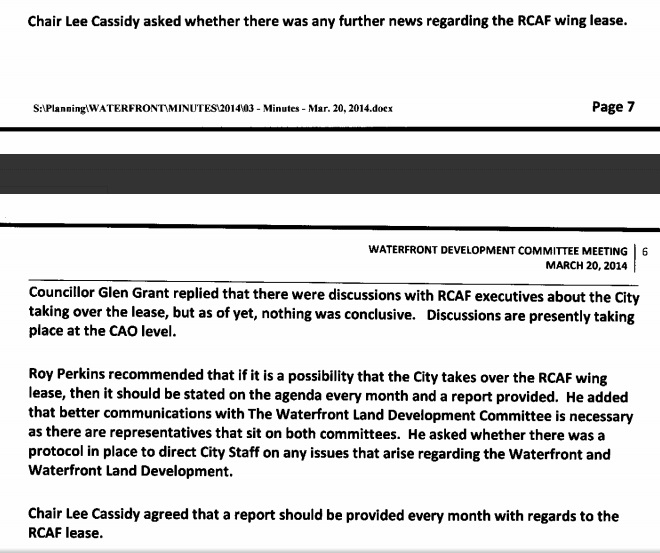 CORNWALL Ontario – Is Mayor Kilger and his council after the RCAF Wing ?   According to documents from Committee meetings it appears that the Wing is in play and part of the secret closed door Divestiture meetings taking place during the last year of this term. With Mayor Kilger and Councilor Grant on the Committee the waters are very very muddy.   Clearly this was not part of any election mandate nor is the secrecy something that the public is happy with.

The Waterfront Committee is essentially a few developers, a few from council and city management, and some inside yes people.   There truly is no representation from the public as those members were ostracized from the last committee because as some put it “..they weren’t interested in turning the waterfront into condos…”

Asked for comment Mark A MacDonald, a bitter rival of Mayor Kilger in the last election and previous council, stated he had “no comment at this time” .

The Wing has been trying to sign another lease now for nearly a year as their past lease has expired.    The hall is the only waterfront location that is licensed on our waterfront currently and besides being in need of some repair allegedly doesn’t generate a lot of cash for the Federal government.

What do you think Veterans, supporters, and tax payers?   Should the RCAF Wing get another lease?  Should the city take over especially after the cover up of the Chem tanks?   Does Mayor Kilger have a moral mandate to be negotiating anything without the public giving him that support and why wait until the last year of a term to be focusing on these issues; especially since he and most of his council have not filed their papers to run again?

At tonight’s Waterfront Development Committee Councilor Grant shared that there is a meeting regarding the Wing at the end of this month scheduled.

Kilger Council In Talks to Take Over RCAF Wing Lease In Cornwall Ontario Too? added by admin on April 17, 2014
View all posts by admin →

20 Responses to "Kilger Council In Talks to Take Over RCAF Wing Lease In Cornwall Ontario Too?"