Mark A MacDonald & L’Association Renaissance Active in the East End of Cornwall.

MARCH 16, 2021 – L’ASSOCIATION RENAISSANCE ASSOCIATION IS A NON-PROFIT GROUP THAT IS WORKING WITH THE LE VILLAGE BIA AND OTHER STAKEHOLDERS AND IS COMMITTED TO THE REJUVENATION OF THE RENAISSANCE DISTRICT BY CONTINUING TO BUILD ON CHUCK CHARLEBOIS’S VISION FOR THE AREA. THE NEWLY-FORMED GROUP WILL FOLLOW IN HIS FOOTSTEPS AND FOCUS ON ACTIVITIES […]

CORNWALL Ontario – Is Mayor Kilger and his council after the RCAF Wing ?   According to documents from Committee meetings it appears that the Wing is in play and part of the secret closed door Divestiture meetings taking place during the last year of this term. With Mayor Kilger and Councilor Grant on the […] 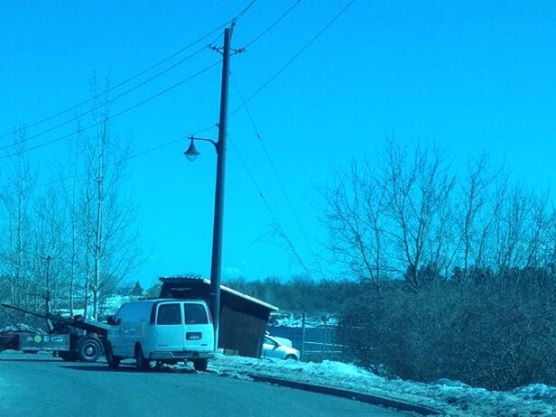 CORNWALL Ontario –  The little shed that could apparently couldn’t.  After getting some new paint it was hauled away by order via Herb’s Towing. I contacted Mark A MacDonald; council candidate and leader behind his own occupy movement regarding the tanks and he stated the following: It’s too bad we didn’t have a big enough […]

CORNWALL Ontario – There has been one consistent public message in Cornwall Ontario since December 2013, and that the community wishes to not have chemical tanks on our waterfront and in particular the ones on the Trillium Distribution Inc. site. While there are varied responses, that’s the common theme.   That message seems to have […]

Greetings MP Lauzon: Further to my email to you last week, take notice that I am still waiting to hear from you, when will the chemical tank farm be removed from our waterfront? Construction at the site continued all weekend despite city issued “Stop Work Orders” and continued widespread public calls for work to stop.  […]

CORNWALL Ontario – Mark A MacDonald likes to throw around the term Occupy or Occupy Cornwall.   Who can blame him.  We all like to have some bad ass street cred; but frankly this gerrymandering about the Chem tanks is creating support for the bad guys. If you believe the spin the entire City of […]

CORNWALL Ontario –  We have just heard from organizer Mark A MacDonald that the Cabane a Sucre wagon will be placed in front or near the site of the contested Chem Tank site next to Legion Ball Park. We will be updating with video as more information becomes available.

CORNWALL Ontario – When politics take over principles we all lose.   Today it was announced that the Cornwall General Hospital site was sold to developers in Ottawa for $2M.     We have not confirmed that number as the Hospital has not sent us a release. Sadly politics doomed a much needed facility for […]

CORNWALL Ontario – While Mayor Bob Kilger and his council in Cornwall can spin the current discussions with the Federal Government over the Harbour lands, the bottom line is that council gave a green light with a 8-1 vote (councilor Samson was in Florida again) for the Mayor and Clerk (herself a lawyer) to sign […]

Greetings:  we will have two guest speakers and we are meeting at the Navy Club this time–we are starting at 6:00 pm. I am hosting an open meeting for declared candidates and those people that may be thinking of running for a COUNCILLOR POSITION.  This time it’s downstaris at the NAVY CLUB on Sixth St., from 6:00 pm till […]

Mark A MacDonald Announces on Facebook That He’s Running for Council in Cornwall Ontario – March 3, 2014 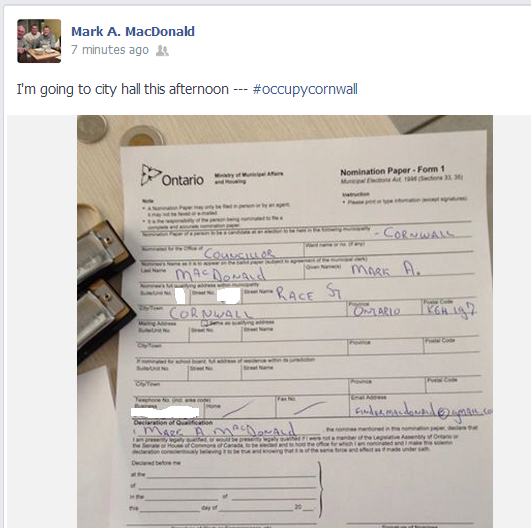 CORNWALL Ontario –  Mark A MacDonald posted on Facebook today that he will be filing at City Hall to run for Council in the 2014 Municipal elections. Mr. MacDonald, a former two time councilor, ran for Mayor in 2010 losing to Bob Kilger as well as losing to PC MPP Jim McDonell.   He won […]

Sounds like Mark A MacDonald is Campaigning in Cornwall Ontario – LTE March 2, 2014

The colossal mistake of building chemical storage tanks on our waterfront is a prime example of a city council lacking clear direction, which I must take some responsibility for. We desperately need a city council that can focus on an agenda that will bring some meaningful progress to our city. Resignations, criminal charges, huge payoffs and secret […]

MUNICIPAL ELECTION MEETING Who — Mark A. MacDonald What — I will be hosting a meeting for future municipal candidates and those that are thinking of entering the municipal race.  Advertisements with details will appear in local media next week. Where — Air Force Wing in Cornwall. When — Thursday, February 20th, from 5:00 pm till 7:00 […]

Cornwall Ontario – Part of the 11th Councilor Column will be guest appearances by current and former Municipal elected officials. Today’s guest 11th Councilor is former Cornwall Ontario Mark A MacDonald.   Mr. MacDonald also ran against Bob Kilger in the last election and ran for MPP.   When not playing music he’s involved in […]

With all due respect to our MP Guy Lauzon, your recent statements regarding the chemical storage tanks issue are completely opposite to the message from the community. There is only one solution.  NO TANKS — STOP NOW. I encourage people to sign a petition, attend a meeting or rally, call a politician, just do whatever […]

Hi everyoneOne objective reached I will be addressing City Council this coming Monday evening Topic Reaffirm our communities feelings about construction of new storage tanks.  We don’t want them. Encourage Council to continue to pursue their legal options.  We may need them Ask council to get me in on that Jan 14 2014 meeting and I will be ready to answer […]