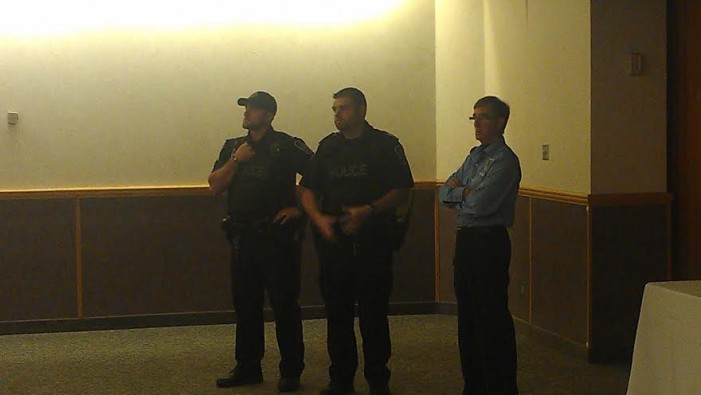 CORNWALL Ontario – I was prepared for just about anything tonight.  It’s been a crazy Ontario election here in SD&G.  Public interest has been at a minimum.  This election’s Chamber of Commerce debate had about 100 less than last elections and most of the crowd was very very partisan with the NDP grabbing the centre seats and oddly enough, most of the PC crowd sitting on the left.

It was also interesting as to who was not at the debates.  No Bob Kilger, no Bernadette Clement or David Murphy.  No Denis Thibault or Guy Lauzon.  Former Lib candidate and current council candidate Mark A MacDonald also wasn’t seen.    A lot of the usual cliqusters must be Habs fans and decided to watch the game instead of attending the debate.

In an earlier story (LINK) I addressed the issue of the Chamber either causing interference or blocking me from the event.   After talking with some people I decided to grab my amazing JVC camera and hit the debate.

I did not sit at the media table.  In what seems of a CRTC violation the Chamber seems to make the event a Cogeco event instead of allowing private media the opportunity to shoot and they were given preferential space.

I do wear multiple hats.  I am media.  I also am a resident and taxpayer.  I also am running for Mayor of the largest city in this riding.   And I also am a political activist on many important issues.  In this situation I was asking a question of the PC party’s Municipal Affairs critic about the Cornwall General Hospital and why he wasn’t more active in trying to save the facility and the many scandals plaguing Cornwall city council.

I was not approached by any chamber staff and quietly covered the event.   It went smoothly until I decided to ask a question and enter the line.   I have asked questions in all previous debates I’ve attended.  I’m not just media; although Chamber Prez Kevin Hargreaves said I was not reputable media and a blogger, but sure enough some poor city staffer accosted me and tried to pull me from the line. More disturbing were THREE Cornwall Police Service Officers waiting with him on the side for moi. (the third officer was not in the photo above)   This coming a day after another CPS officer called and stated that if I didn’t remove a video from CFN that he’d open an investigation against me which some people might interpret, as I did, that I was being threatened.   This is now the second time that the CPS have demanded that I take down content from CFN or else…   I’m still waiting for my charges to be dropped regarding the allegations that I made threatening phone calls.

My phone records show I didn’t make the calls, but the crown is demanding what are called “production orders”.   Our police service charged me without viewing my phone or phone records.  Those charges were used to smear me in multiple media outlets which most likely not give the same ink when I’m finally cleared.

After finishing my question which was answered quite well by MPP Jim McDonell, I went after the police as I wanted the person who accosted me charged, but they turned their backs and vacated the room refusing to speak or comment.

Frankly I find things are not only getting silly, but I think it’s horrible that the many fine officers of the CPS may get tarred with the actions of a few, but I also think it’s time to end the late night calls and police cars at my door.   It’s really feeling like I’m being harassed which is difficult because part of my job is interacting with the police.

The one redeeming part of what happened tonight was that several of the public spoke up, and I think things might have been worse if they hadn’t.  In particular I appreciate the words of council candidate Rolly Besner.   Very few of Cornwall’s municipal candidates were present.

The debate itself  had a bit of friskiness as we’ll cover in our subsequent story.   MPP McDonell, who I labelled “Mayor McFuddle” in the last election, clearly has improved his speaking skills and handily batted down the limp attacks of his adversaries.

Elaine MacDonald spun the usual NDP tripe about raising taxes, and raising the minimum wage as a solution to the ills of the current government which seems to be doing that already?    While Mr. McDonell’s argument had very little substance they certainly were well timed.   Liberal candidate John Earle was shouted over by everyone including Libertarian candidate, farmer Shawn McRae, who scored a lot of points during the night.

So SD&G residents; why didn’t you attend the Cornwall & Area Chamber of Commerce All Candidates Debate?  Was it the hockey game or are you like many turned off by this election; our local candidates, and the party leaders?   You can comment below.

Thanks to Christopher Cameron for the two photos in this story.

Three CPS Officers Await After I ask Question at Chamber All Candidates Debate in Cornwall Ontario by Jamie Gilcig added by admin on May 29, 2014
View all posts by admin →