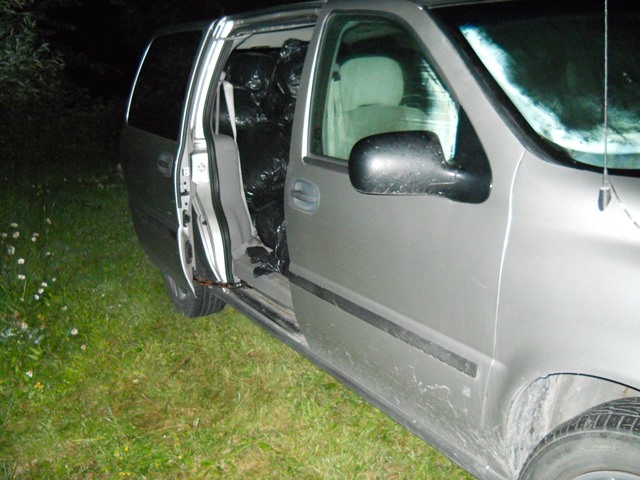 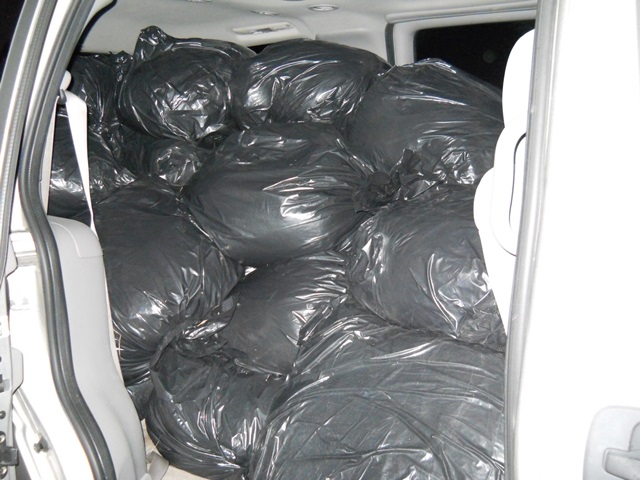 CFN – During the early morning hours of July 11, 2014, while conducting surveillance along Cornwall’s east end waterfront, members of the Cornwall Regional Task Force (CRTF) observed a boat, running without its navigational lights, approaching the shoreline near the Waste Water Treatment plant. While this was occurring, a van was observed traveling westbound along the city’s bike path from Boundary Road.

The van was driven without headlights and parked near the gazebo for concealment. The driver of the van met with the two occupants of the boat. It is alleged that the three individuals emptied contraband product from the boat into the van. CRTF members converged on scene to arrest the suspects. Two individuals were able to avoid apprehension by jumping into the river, swimming to and boarding their vessel and departing. One male, later identified as Micheal DUROCHER (age 29), of Cornwall, was apprehended at the scene. The van was found to contain 35 black plastic garbage bags of fine cut tobacco weighing a total of 471 kilograms. DUROCHER was arrested, and escorted to the Cornwall RCMP Detachment where he was processed and later released from custody on a Promise to Appear. The van a 2006 Chevrolet Uplander, and contraband were seized.

During lunch hour on June 27, 2014, CRTF members were alerted to a suspicious transaction taking place between an unknown individual in a boat and two males ashore at a South Glengarry waterfront restaurant. The package was observed being placed into the trunk of late model Hyundai Elantra. After the two patrons completed their lunches and departed the restaurant, CRTF members stopped the Hyundai to further their investigation. Through investigation, a sum of $34,000.00 in US currency (in varying denominations) was located inside a tote bag in the vehicle’s trunk. This currency has been seized. Both males, from the Laval, Quebec area, were arrested, transported to the Cornwall RCMP Detachment for processing and released unconditionally. These individuals have not yet been charged as the investigation into this matter continues.

During the early morning hours of June 13, 2014, CRTF members received information, via the OPP, that a load of contraband cigarettes had been dropped off at a particular avenue in the Bainsville, Ontario area. At approximately 05:40 hrs, members attended and searched the area and located the contraband product on a dock at the shore. In total, twenty (20) cases of flavoured (cherry, peach, vanilla, strawberry and grape) cigars were seized.

On June 5, 2014, CRTF members were called to Cornwall’s Port of Entry (POE) to process a domestic contraband seizure. Kierian JACOBS (age 18) of Akwesasne, Ontario was arrested and charged for having eight (8) garbage bags containing approximately 105 kilograms of fine cut tobacco in her possession. JACOBS was processed and later released from custody on a Promise to Appear. Her vehicle, a 2014 Chrysler 300, along with the contraband was seized.

After dusk on May 25, 2014, while conducting shoreline surveillance operations in the South Glengarry area, a CRTF member observed a suspicious vessel approaching the shore. The vessel was believed to be occupied by two males and appeared to be riding low in the water. The member temporarily lost sight of the boat as he alerted his colleagues of the activity. A short time later, the boat was observed departing the noted area visibly lighter than it had previously. CRTF members converged on the suspect location and found several black garbage bags containing fine cut tobacco on shore. The search also revealed a 1999 Quebec plated white Chevrolet Silverado pickup truck parked nearby containing a half dozen black garbage bags of fine cut tobacco. It is believed the truck was to be used to move the illicit product. In total, 60 garbage bags of fine cut tobacco weighing a total of approximately 800 kilograms and the truck was seized.

This investigation is ongoing.   The individuals noted above, who have been charged under the provisions of the Excise Act, 2001, also face charges under the provincial Tobacco Tax Act for possession of unmarked cigarettes. If you have any information regarding criminal activity in your area, you can contact the CRTF at 1-613-937-2800 or call Crime Stoppers at 1-800-222-8477. The CRTF is a joint forces partnership that includes the Royal Canadian Mounted Police, Canada Border Services Agency, Ontario Provincial Police, Cornwall Community Police Service and the Ontario Ministry of Finance.