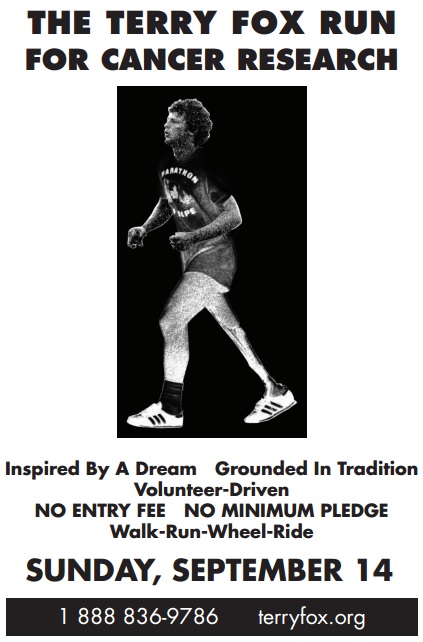 CORNWALL Ontario – It was 34 summers ago that a young man from British Columbia captivated the world with his determination to find a cure for cancer.

More than one million Canadians will participate at approximately 6,000 locations across Canada. Since Terry’s Marathon of Hope in 1980, The Terry Fox Foundation has raised over $600 million for cancer research.

The Terry Fox Run will be held on Sunday, September 14th at the Cornwall Civic Complex between 8:00AM and Noon. Everyone is invited to walk, bicycle, run or skate 1km to 10kms along the bike path. Participants can make a personal donation of any amount, or can collect pledges from friends, neighbours, family members and co-workers ahead of time using pledge sheets or by collecting online. Participants should remit their pledge sheets at the Run Site.

Pledge forms can be picked up at any BMO and RBC Banks, the Cornwall Public Library, almost all Cornwall Fitness Clubs, both LCBO locations, Pat’s Home Cookin’, the Aquatic Centre, the Benson Centre, Short Line Convenience & Video Store and Play It Again Sports. Participants can also download and print their own pledge sheets or collect pledges online by visiting www.terryfox.org.