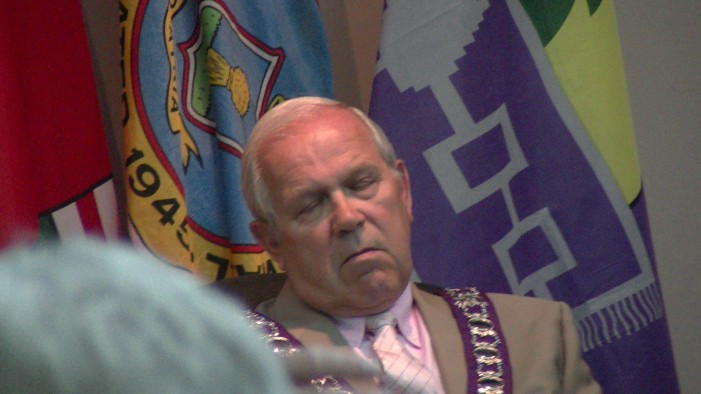 CORNWALL Ontario – It’s been two days since Monday night’s council meeting in Cornwall where Stephen Fournier presented his report to council.   He really didn’t have to be there for the fifth time.   That’s unusual as Mr. Fournier is simply a closed meeting investigator.

In this case it was for the illegal action of moving in camera at a Waterfront Committee meeting that the Mayor and the second most senior councilor, Glen Grant sit on, and voted to move in camera in spite of committee chair Lee Cassidy asking for advice.

Councilor David Murphy; who actually wants to run for mayor in 2018 was dumbfounded by Mr. Fournier’s answer to his question regarding how many times he’s had to deal with issues like this in the 32 other municipalities he services.  (Advance to the 2:40 mark of the video below)  Btw, Mr. Murphy Mr. Fournier has serviced your council 5 times; not one!

Elaine MacDonald was grateful for the report.  How many times does this long time councilor and chair/board member of many groups need “advice” on how in camera meetings work?

Mr. Fournier spun things after the meeting as nicely as he possibly could; but his report was very very clear. Councilor Rivette was trying to explain something; but I wasn’t quite sure….

When Gerry Samson makes more sense than most of the rest of council that says something.

Mayor Kilger again attacked him in open council at the 4:30 mark of the video above.

And at the 1:20 mark below watch Glen Grant’s nose grow as he talks about not wanting to go in camera after being the chief culprit of what occured at the WFC meeting not only in moving in camera illegaly but by instigating the committee to vote to strike this newspaper as attending as media in the minutes!

And that’s the problem.  How many people really know what happens with this wacky corrupt group of elected officials and management that allow them to behave in this manner.  With the bulk of the city’s near $300K per year ad budget split between the Freeholder and Seaway News is it surprising that they would lay down or white wash a scandal in today’s media age?

City committee broke the rules, but no malice intended: investigator

“It was abundantly clear that there was no intention to conduct a closed session…it was a spontaneous event that happened,” he said Monday night. “There was no effort to consider an amendment…to amend the agenda to have a good discussion about having a closed session.

“The committee simply moved into a closed session.”

The true maliciousness is in Mr. Lihou’s words which clearly are not meant to be truthful or relay news.

Society curator Ian Bowering took issue with making public comments concerning funding for a project, and also made mention of a legal issue he has with a local website – the operator of which was in attendance at the meeting, said Fournier’s report.

TC Media’s  Rick Shaver tried to purchase CFN and hire yours truly to be editor before Mr. Lihou was hired.  He clearly knew we were an online newspaper then as we are now.  We clearly are the leader in this marketplace.  Why refer to us as “a local website” ? Would he refer to the Freeholder as a “local website” or to the Seaway News own online edition in such a manner?   Is that petty and childish?  I can’t imagine the people at the head office of TC media being terribly impressed.   If you’re going to attack; make it count.  Ask local boxer Tony Luis about throwing punches.

Where was Mr. Lihou’s coverage of the event as it unfolded?   Where was the Freeholder Monday  night?  One of their best writer’s was there; but again, two days later no piece in the Freeholder.

Here’s is the video below of the incident.   Councilor Grant moved to go in camera after Mr. Bowering’s suggestion that our lawsuit against him for striking our CFN camera at an event had something to do with his presentation which it didn’t.

The irony is that bloggers are actually considered media too…

Councilor Clement spoke for nearly four minutes and waved her flippers around. Not quite sure what she said although she seemed terribly grateful.   Councilor Dupelle nearly apologized.    Nearly.   He’s very earnest, but maybe these near four years of sitting next to Denis Thibault have rubbed off on him?

To add to the circus Denis Carr tried to duck his responsibility when Chair Cassidy asked for advice and then challenged an audience member.  Mr. Carr also pointed out that most committees have nobody in attendance from the public which is very sad.

It also shows how critical the waterfront issue is; especially after the Chem Tank scandal that hit us this year and that City Hall still has not been accountable with the public over.

Mayor Kilger seemed to nod off… before waking up for the second half.

So to encapsulate in point form:

Councilor Grant suggested they move in camera which they did illegally

The Freeholder filed a complaint with Mr. Fournier

The Seaway News pretty much lay down.  They did not interview myself or others evicted from the meeting

No actual apologies to date to myself, others, the chair, or public have been issued

Council deferred the report until Mr. Fournier could appear; why?

Council acted all surprised and bewildered as Mr. Fournier read the report

This is as bewildering as the media not demanding City Hall to answer why and who knew about the Trillium Distribution Cornwall Inc. chem tanks on our waterfront deal in February 2013 and June 2013 and then acting all surprised in December?

Our last interview was with Bill Parisien and Bill Beattie, former members of the WFC who still attend the meetings.

The big question is how can the public react if they don’t know what happens and can media survive and function in this financial political carrot and stick behavior?

One journalist was allegedly fired for covering City Hall.  He now works at SCM in logistics.  Corus radio shut their whole newsroom down after the chem tanks incident with Eric Spence allegedly darkened the city’s relationship with the radio stations.