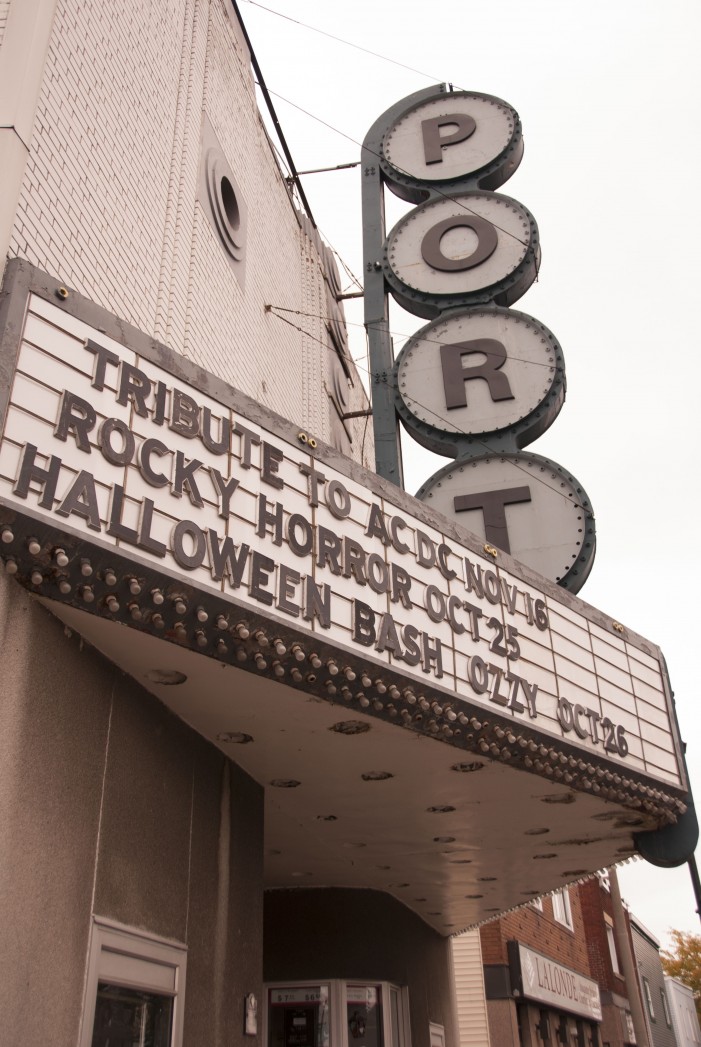 CORNWALL Ontario – I was at the Port theatre last night.    It’s an original Roxy theatre that has struggled mightily to survive as it approaches its 75th anniversary.

They are still fund raising to add digital projection; but since the Sylvain family have bought it have cleaned it up and essentially saved it.

Larry Sylvain is the premier sound man in the region.     Thanks to his love of music and teaming up with promoter Jeff Brunet they’ve brought in over 25 events since they started working with the Port.

Some of which have been the first sell outs the building has seen in decades.

After running nearly two dozen licensed events without issue via caterers and charity events they decided they needed to get a liquor license themselves to ensure their survival as they were only getting a small portion of the proceeds.

And that sadly is becoming another Cornwall Ontario Small Business tragedy as they have been needled and tweezed by a permit department which one city official, off the record, cited as full of under paid rookies that don’t know their {DELETED} elbows.

Promoter Jeff Brunet suggested in the video above that this is an election issue and he’s right.  Business being able to open and operate without abuse or incompetence is critical to the growth of our community.  Likewise every time a business gets “Cornwalled” word spreads which is counterproductive.

The Port was stunned to have one of their caterers get a letter of warning from Inspector Crites which has resulted in several concerts being without liquor which has hurt attendance.

Mr. Crites stated that he was there to make sure that the theatre did not exceed the 114 seats allocated to alcohol service,citing washroom issues; but the theatre has over 500 seats and is a heritage property.

It’s similar to when the City wanted Table 21 to redo the staircase for a half an inch per riser or one pizza joint that literally was closed for 12 months waiting to open.

There is apparently some discretionary space; but the question is why the city; Fire Marshall and ultimately Mr. Crites who showed up in uniform on a Saturday night to do a head count and heckle this writer about not being able to keep up with him climbing stairs to the balcony as seen in the video above.   After leaving Mr. Crites waited across the street watching for whatever it is the Mr. Crites watches for….

The Port did not go on record in an interview as they are hoping to keep their business rolling; but with five concerts coming up on the schedule the uncertainty of whether they can or cannot run licensed shows are weighing heavily for the business.  Clearly their frustration is mounting; especially as Winter is approaching which leads to higher overhead and a larger risk for weather related cancellations.

Mr. Brunet did mention some acts that want to book at the Port; but they can’t until they have certainty over their liquor license.

Not a single councilor has publicly shown support for the theatre which feeds into rumors that the city is hoping to have the theatre become the future home of its art centre as the lot next door to it can be purchased.   (the city currently leases it from the Emard family)

But for Larry, Nancy, and Nick, their labour of love continues and hopefully they can survive petty small town heavy handed politics.   After all the biggest complaint from people in Cornwall is that there’s nothing to do; especially for young people and the Port has become THE VENUE for our top talent, as well as one of the few not tax payer supported venues left in the city.

And it’s time for the city of Cornwall to do what is necessary to ensure that its permit department doesn’t hold back growth in our community.  IF we can find $500K for corporate welfare and millions on the mayor and council’s scandals of the last term, we should be able to pay the going rate for better permit staff as this is not a single anecdotal issue with a business having issues in bringing culture and life to our city.