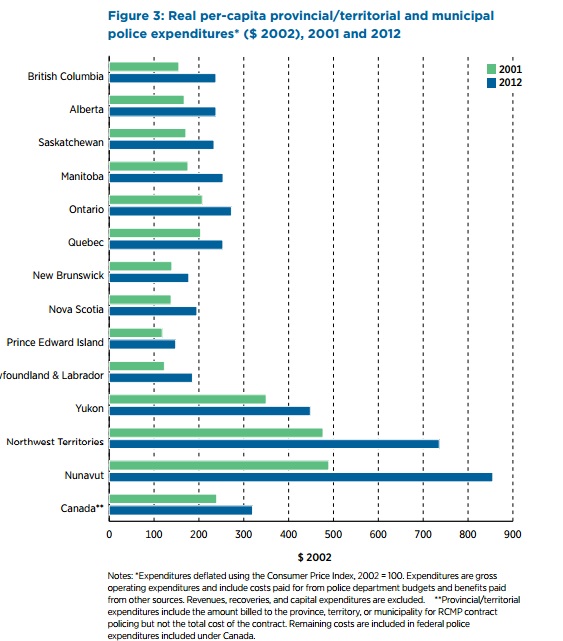 “Police fulfill a fundamental role in society and protect law-abiding citizens from criminals. But taxpayers can face higher costs for police than the crime rate or other socio-economic factors warrant,”

Conversely, Moncton, N.B., and Kelowna, B.C. have the most understaffed police forces. (For the complete list of the top 10 most overstaffed and understaffed metropolitan areas, see bottom of news release.)

“While more police can lead to lower crime rates, at some point, increased spending on additional police officers has little impact on crime reduction. Today, in many cities across Canada, an excess of police officers are dealing with less and less crime,” Di Matteo said.

The study finds that government spending on policing grew substantially over the past decade even as crime rates dramatically fell. For example, between 1986 and 2012, policing costs (per person in Canada) rose by 45.5 per cent while criminal code incidents per officer (a unit to measure police workload) dropped by 36.8 per cent.

“Of course, declining crime rates are a good thing, and some may attribute those declining rates to an increase in police spending. But in reality, some Canadian districts maintain substantially larger police forces than their crime rates warrant while other districts maintain smaller forces despite relatively high rates of crime,” Di Matteo said.

“As municipalities across the country struggle with limited resources, more analysis should focus on the nature and volume of police calls, the arbitration process involving police unions, policing technology and styles, and other factors that determine police staffing levels.”

Fraser Institute Study – Police Overstaffed in Many Canadian Cities – Sept 22, 2014 added by admin on September 22, 2014
View all posts by admin →