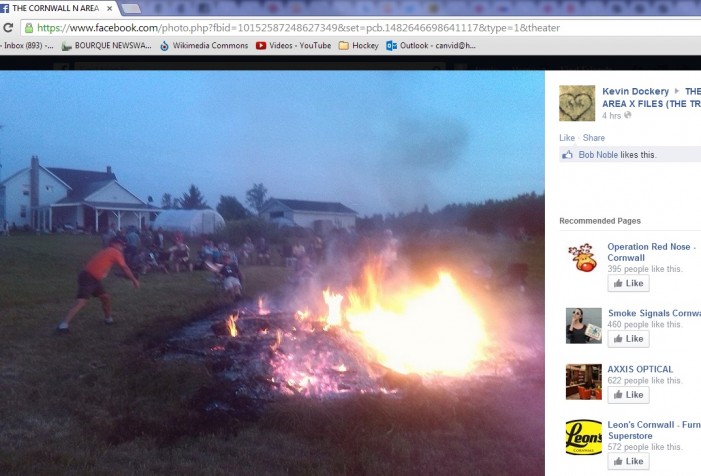 CFN – The Seaway News ran the photo on the left in a story about sign defacements in South Stormont Ontario.    LINK  Defacing signs like this is horrible.

The election is a fierce race with sides being drawn due to the Deputy Mayor’s rodeos with Integrity Commissioner Robert Swayze that have cost the township, according to estimates, over $30,000, and led to Ms Hart being dinged four weeks earnings.

In the article defacing an election sign is described as a crime; but in a most unusual twist the Deputy Mayor herself is alleged to have gone into a restaurant in South Stormont and removed a stack of The South Stormont News printed edition which had four election ads in that edition.

She is alleged to have complained about the paper “bashing” her before storming out of the restaurant.

Wouldn’t her removal of the newspapers essentially be removing election signs?  Do Election signs have to be of a certain material to qualify?   This is not the first time that stacks of the South Stormont News have been removed from retail outlets.    It is also alleged that the Deputy Mayor herself removed  a stack of newspapers from the township office and was at a paper burning BBQ at the home of Council candidate Richard Currier. Both Ms Hart and Mr. Currier have actually, as part of their platform, stated their intentions towards the newspaper with the Deputy Mayor stating that she would remove it from the community. The Deputy Mayor, under new business also stated that she would remove the paper.

One of my objectives is to get rid of that newspaper.

A complaint will be filed with local OPP.  An Unnamed OPP officer suggested that stealing “free” newspapers would not be considered a crime; but could you imagine if someone drove from location to location and offloaded racks of newspapers regionally?   Does anyone think that it really isn’t a crime to do such a thing?      I have a hunch locally The Seaway News, and others would have something to say if their production runs started to go poof!    While there may not be a price tag on the papers they are subsidized by advertisers.  Nothing is really free.

A complaint of harassment with the township offices as well.

The Deputy Mayor & Mr. Currier also have been questioned for putting out allegedly false information to voters regarding the Pellet plant and other numbers.

hi here a truth, please note that I have included the source of information. no speculation

BIO Pellet
This project was approved prior to 2010; the purchase was accompanied by a $76,000 deposit. The company was not able to acquire the funding needed to complete the build. After a lengthy time period the township foreclosed on the outstanding mortgages and reclaimed the property. As a result of this action an expense of $22,783.59 was incurred for legal and taxes leaving the township with $53,216 from the deposit monies, this was transferred to South Stormont Township Municipal Land Development account for future endeavours. The losses incurred by the Township on this transaction was the time, and energy of the Council and Staff attempting to bring something good to the township. During this time I know of no other inquires to purchase the property in question.
(Source December 11, 2013 Finance report F-20-2013)

The first All Candidates debate (and so far only in South Stormont) will be Tuesday October 7th at 7 PM at The Marina Restaurant in Long Sault.   All candidates running for office in South Stormont have been invited.

For details coverage of the candidates and election you can visit www.Southstormontnews.com or pick up your latest edition (out today!) of The South Stormont News, that is if Deputy Mayor Hart doesn’t get there first and remove them…. Should Stealing Newspapers With Election Ads be Treated the Same as Defacing Signs by Jamie Gilcig added by admin on September 24, 2014
View all posts by admin →