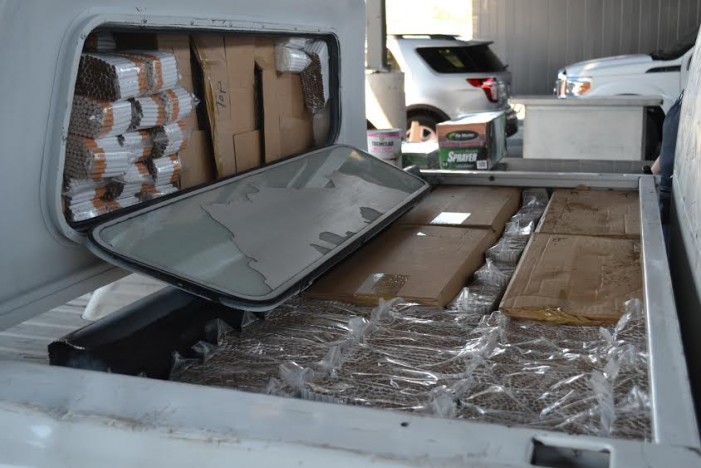 CORNWALL Ontario –  On September 4, 2014, members of the Cornwall Regional Task Force (CRTF) Were called Expired to the Cornwall Port of Entry by the Canada Border Service Agency (CBSA) officers. They HAD Performed a secondary search of a vehicle traveling through the border and Discovered drugs in the vehicle. RCMP officers arrested This Attended The Scene and Kyle Adams, age 25, of Lunenburg, Steven Adams, age 51 of South Stormont and Jeffrey Goulet, age 48 of Cornwall for drug possession. They Were all released On Their respective Promises to Appear.

Members of the CRTF Were Conducting oversight on the shorline of the St Lawrence River in the early morning hours on September 16, 2014 When They Observed a male (a 21 year old from Rigaud) piling boxes of contraband cigarettes were property in South Glengarry. Officers suspect the Approached Who Attempted to flee Then from Police on foot. He Was times later apprehended and arrested This sans incident. There Were a total of 45 boxes of contraband cigarettes That Were Seized. Charges under the Excise Act, 2001 are pending.

In the late afternoon on September 16, 2014, members of the CRTF Responded to a call from CBSA officers at the Port of Entry. A vehicle with a lone female driver WAS traveling through the POE and Referred for a secondary inspection. During The inspection officers Noted the year Overwhelming scent of tobacco emanating from the vehicle. Following a close examination They Discovered That the wall of the box of the truck pulled back Could Be And They Seized several boxes of contraband tobacco Located in this hidden compartment. A further Top search Revealed two hidden compartments inside the –other vehicle Containing contraband tobacco. Lisa Dana White, age 49 of Akwesasne WAS charged under the Excise Act, 2001 for Attempting to smuggle contraband tobacco Into Canada. A total of 14 boxes of contraband cigarettes Were Seized along with the Chevrolet pickup truck driven by That Was WHITE. She Was released on a recognizance with a $ 500 cash deposit.

On September 17, 2014, members of the CRTF Marine unit on patrol Were on the St Lawrence River When They Approached two males operating a pontoon boat. After a brief discussion and further Top investigation, the officers Located six trap doors bolted onto the pontoons of the boat. Inside thesis hidden compartments, the officers Discovered forty eight (48) cases of contraband cigarettes That HAD-been concealed. Arrested and charged under the Excise Act, 2001 are 24 year old Daniel LALONDE and 44 year old Kevin Smith, both, of Cornwall. They Were released on PTA’s. There Were a total of 48 cases of contraband tobacco Seized along with the modified pontoon boat, a trailer and a Dodge pickup truck.

On September 25, 2014, members of the CRTF Observed a boat loaded with contraband approaching the shore of the St Lawrence River near Bainsville. The officers Attended the area Where the contraband HAD-been dropped off and Observed a pickup truck leaving the laneway, They Attempted to stop the vehicle, the vehicle sped away goal. The members caught up to the pickup truck the goal two occupants abandoned the vehicle and Fled on foot. The Emergency Response Team (ERT) and the OPP K-9 unit Were dispatched and After a search of the area, the driver WAS Located hiding in a nearby forest and arrested This sans incident. Louis-Philippe CHASLE, age 22 of St. Zotique WAS charged for possession of contraband tobacco and was released PTA. The CRTF officers has Seized Ford pick-up truck and two thousand eight hundred and seventy five (2,875) cartons of contraband cigarettes.

The marked values ​​Noted Individuals, Who-have-been charged under the provisions of the Excise Act, 2001, aussi face loads under the provincial Tobacco Tax Act for possession of unmarked cigarettes.

“We can see how our great cooperation betweens agencies resulted in Successful investigations” Said Cst. Juneau media relations officer from the CRTF. “Officers and partner agencies are working hard to make our community safe, thesis Successes Can Be Even Stronger with everyone’s vigilance. Remember Any suspicious activities to report to your local police for Increase efficiency.”

The CRTF is a joint forces partnership that includes the Royal Canadian Mounted Police, the Ontario Provincial Police, Agency of Canada and the Department of Finance for Ontario border services.