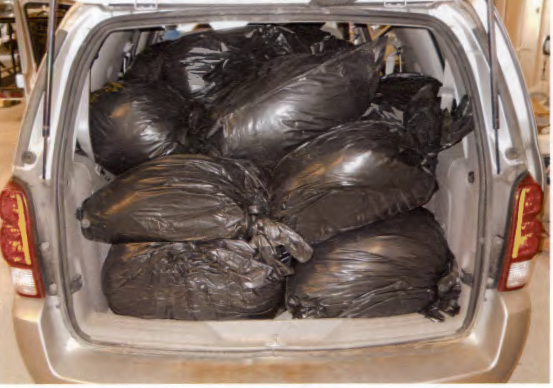 CORNWALL Ontario – Cornwall Regional Task Force – Serious and Organized Crime (CRTF-SOC) team and partners announced the results of a project that led to the arrest of three (3) individuals alleged to be involved in the smuggling, distribution and sale of contraband tobacco products in the Cornwall and surrounding area.

Project O-NEPTUNE was led by the Royal Canadian Mounted Police (RCMP) – CRTF-SOC in partnership with:

On July 10 and 11, 2014, it is alleged that Cornwall residents David Frank DELORMIER (aged 32), Nathaniel Lee GATIEN (aged 28), and Micheal Mark DUROCHER (aged 29) conspired with one another to acquire, smuggle and attempt to deliver a load of contraband tobacco totaling 471 kilograms from New York State to the Quebec area.

During the early morning hours on July 11, 2014, while conducting surveillance along the shoreline in Cornwall’s east end, CRTF-SOC members stopped this delivery from occurring and arrested DUROCHER at the scene. DUROCHER was charged with being in possession of unstamped tobacco contrary to Section 32(1) of the Excise Act, 2001. DUROCHER was in the process of loading the contraband tobacco into the 2006 Chevrolet Uplander van he was operating.

On this date, DELORMIER and GATIEN have been arrested and charged for their alleged participation in the July 11, 2014 contraband seizure. DELORMIER, GATIEN and DUROCHER have additionally been charged for conspiracy as it relates to this seizure.