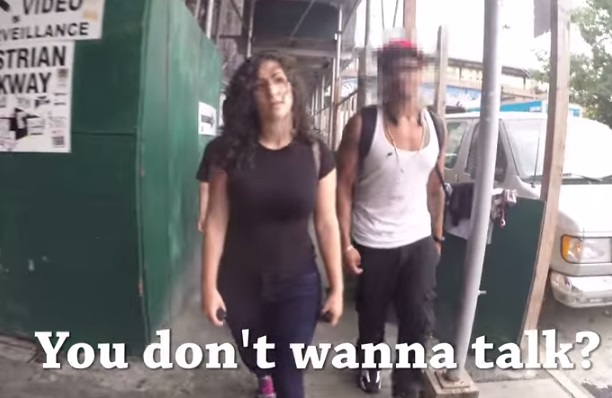 CFN  – What an odd world this is becoming.  A video purporting to show what beasts men are has gone viral on You Tube.  I’m sure many of you by now have watched the near two minute clip of the  curvaceous and zexy Shoshana Roberts jiggle around the Big Apple from  10 hours of footage.

How you doing today

what’s up beautiful –  have a good day

how are you this morning

have a nice evening

hey look at that I just saw a thousand dollars

have a nice evening darling

Really Anderson?  Ten hours in Manhattan and this is the drama?  You were old enough to remember the 70’s, right?

To sum this up, after ten hours of recording and walking around only one stalker or really creepy incident was recorded including night footage.

Of the remaining ten hours most of the comments clearly do not cross any lines.

Since when did calling out to someone become a crime?  Do we live in bubbles now?  Were these men stepping into her person space?

I would suggest that we have lost the ability to communicate and live with each other have become hyper sensitive.  Why is that?  Why aren’t we teaching our children simply how to react?     Men or women.

I myself while visiting London and driving around with my friend stuck my head out of my bud’s sun roof and uttered the famous British phrase while at a stop,  “Corr what knockers!”

The fair English maiden stopped, turned to us, smiled, and then clippity clopped across the street.   Should I have been arrested for that?  Should I be condemned as I’m sure some might after I’ve shared this story?   That particular woman seemed quite happy with the compliment.  Maybe people in England aren’t as sensitive as we North Americans?

Frankly we live in a world now where it seems people feel safer and bolder communicating via their phones and computers while having no face to face skills anymore.

The Hollaback people chose Ms Roberts for a reason.   She’s got wild curly hair, good breeding hips, and large breasts.  This is caveman 101.

You don’t see the term “Little Pink Dress” or “LPD” for a reason.  The little black dress (or LBD)  is worn by women to bring out some lust in men.(and women on occasion)    They sent her out in form fitting black with pink shoe laces.    Puh-lease!

Sending out that type of caricature and only pulling this sampling in a city that is not known for being reserved is not an indictment.  It’s something that we should be proud of.

Over thirty years ago SNL did a skit of reverse sexism with a young Dan Ackroyd dressed in hot shorts and then cat called by the female cast members.  That was over 30 years ago.

There is a gross difference between what we saw in this video and say what is traditional in Italy.

Italian travel is as easy for women as it is for men. You may get complimented, whistled at, pinched, prodded, or propositioned, but you’re probably physically safer there than you are at home. (Italians see rape as even more repugnant than Americans do, and there are far, far fewer reported rapes in Italy.) – See more at: http://www.reidsitaly.com/planning/safety/women.html#sthash.7d8ocJHG.dpuf

What should be condemned are people like Anderson Cooper and other media who have sanctioned and magnified  this position.  We need to talk to each other more in this world.  We need how to learn how to communicate through issues even when we don’t agree.  And mostly we need to push back against this PC type behavioral hysteria.

But mostly we need to get a grip.